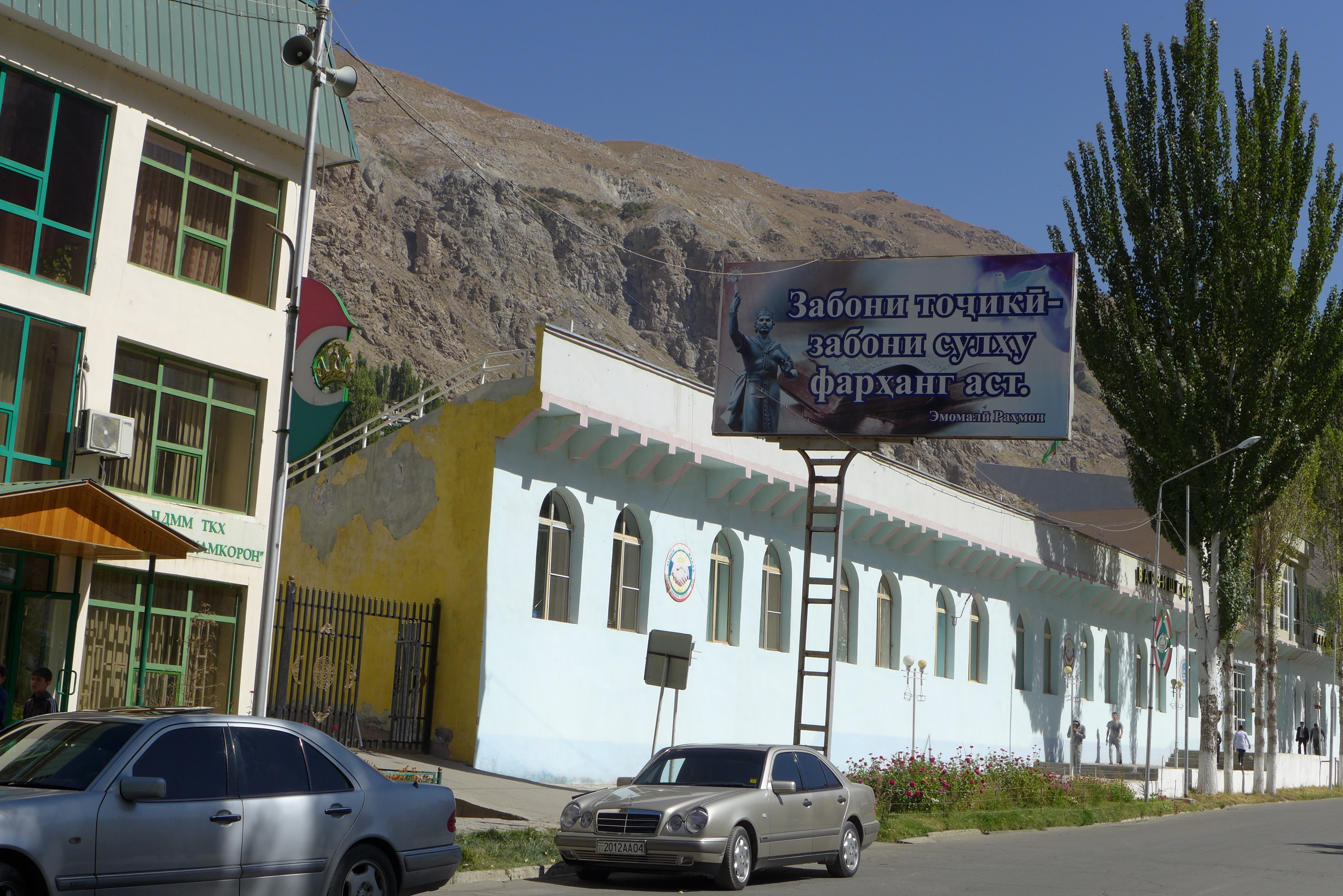 “The Tajik language is the language of peace and culture”: Language politics is one of many sources of distrust between the Pamirs and the center. (Photo: Eurasianet)

Police in the Pamir region of eastern Tajikistan say that the handover of illegally owned weapons ordered as part of an ongoing security sweep is proceeding smoothly and that at least 100 firearms have been volunteered.

Asia-Plus newspaper reported on October 9, citing an unnamed source in the Interior Ministry in the Gorno-Badakhshan Autonomous Oblast, or GBAO, that only one case of violent resistance was recorded.

This development was reported days after the acting governor for the region told reporters he had appealed to leading local powerbrokers for their assistance.

The headlines disguise a more complicated situation, however.

President Emomali Rahmon’s was a few days into his tour of the Pamirs on September 15, when he dressed down top security officials in an incensed tirade in the GBAO capital, Khorog, where he decried what he described as a state of lawlessness in the region. He then gave officials a one-month deadline to address the situation and implied that more robust measures could be adopted if he was dissatisfied with the results.

Alluding to troops brought in to Khorog for a ceremonial parade to mark his visit, Rahmon indicated that even the military could be deployed.

“Those forces that are here now, let them stay. May they enforce order, and then they can leave,” Rahmon said.

Rahmon said, without naming names, that around five or six “criminals” were at the root of the region’s ills. He claimed that local residents were suffering because of the investment and tourism potential lost as a result of this sinister presence.

In the days that followed, a range of personnel changes were made in the GBAO. The head of the region managed to hold onto his post until October 1, when he was replaced by Faizov.

The claims of visibly unbridled illegality do not, however, hold up to much scrutiny. Tourists passing through the Pamirs typically speak of experiencing warm hospitality; petty crime directed at foreigners is a rarity. If the investment appeal of the Pamirs is low, this is mainly because transportation links are catastrophic — the result of seemingly willful neglect of vital infrastructure. Such is the abysmal state of the roads linking the capital, Dushanbe, to Khorog that the 600-kilometer drive can take up to 16 hours to complete.

What feels more likely is that Rahmon is still bridling from scores unsettled since 2012, when government troops clashed with armed groups resisting attempts by the authorities to take local leaders — the “criminals” alluded to in the president’s Khorog speech — into custody. Following negotiations, the men were allowed to remain at large, despite one of them standing accused of being behind the murder of an important local security services officer.

Indeed, despite Rahmon inveighing against informal Pamiri leaders, the newly appointed GBAO governor, Faizov, met with two of them, Tolib Ayombekov and Yodgor Mamadaslamov, earlier this month in what appears to have been an attempt to forge a conciliatory outcome to a anxiety-inducing situation.

Faizov is a telling choice as formal governor of the GBAO. He has for some years headed the Aga Khan Foundation in Tajikistan, a development agency that plays a vital role in sustaining the minuscule economy of the GBAO. The Aga Khan, the hereditary figure after whom that agency is named, is revered as the spiritual leader of the Shia Ismailis that populate the eastern Pamirs and is seen as playing a paramount role in maintaining stability. It is widely believed it was only the intervention of Prince Shah Karim Al Hussaini, the name of the current Aga Khan, that avoided even greater loss of life during the clashes of 2012. Faizov’s appointment would indicate that Aga Khan’s people retain an weighty role to play, although some local people have in conversation with Eurasianet expressed their concern that the spiritual leader’s sway may be in decline among the younger and more intemperate sections of the population.

While elements affiliated to the Aga Khan Foundation represent the party of dialogue, the so-called informal leaders are a more problematic factor. It is a commonplace — albeit by no means properly documented — that such figures are likely involved in less-than-legal practices, up to and including the smuggling of tradable goods such as gemstones, cigarettes and, it is said, narcotics.

If any of the allegations about the figures being lambasted by Rahmon are true now, they have also been true for the best part of a couple of decades. Which raises the question as to why their alleged activities are again being made a subject of official concern. And why now?

Indeed, if there is anywhere that feels like a greater potential source for trouble, it is Khatlon, an acutely impoverished region south of Dushanbe that abuts Afghanistan and has only recently been the scene of an alarming security incident. In late August, a group of gunmen crossed from Afghanistan into Tajikistan’s Farkhor district and killed at least two state forestry workers in an incursion whose ultimate goal remains shrouded in mystery. As even officials freely admit, the area where the incident occurred is a favored transit point for narcotics coming out of Afghanistan — a rich irony given that some of the nation’s top security officials, including the head of the State Committee for National Security, Saimumin Yatimov, are from the Farkhor district.

It is all the more odd in light of this episode that Rahmon should be upbraiding his security leadership over lawlessness in the Pamirs, where such incidents have not been reported.

Even if the weapons amnesty succeeds in cooling temperatures for the time being, it seems Dushanbe is intent on ever-increasingly escalating its influence in the Pamirs and needling the local population, and often in a less-than-subtle manner.

The local branch of the Interior Ministry is busying itself propagandizing the Tajik language — a decidedly questionable pursuit in an area where not only is Tajik not deemed the first language, but attempting to speak the tongue can elicit frosty reactions, at least according to visitors from elsewhere in the country.

On October 5, which marked Rahmon’s 66th birthday and State Language Day, the Interior Ministry in GBAO organized a lecture in which local police chief Abdurahmon Alamshozoda spoke about the Tajik language being “one of the cornerstones of statehood.”

On the face of it, there is nothing obviously incendiary about this, but given that Pamiri languages suffer from systematic neglect at the expense of Tajik, this feels like provocative trolling.

None of the ancient Pamiri languages still regularly used by the local population is taught in schools and there are no broadcasts in the languages. Attempts to rectify that have run into trouble. In 2014, Imruz radio station began to broadcast three hours' worth of programing in Shugnani — one of the most widely spoken Pamiri languages — once a week to residents of Khorog, but that show was suspended after three editions at the request of the authorities.

The government has form on linguistic nose-tweaking. On one of Eurasianet’s most recent visits to Khorog, a correspondent noticed an eye-catching billboard along the central boulevard. It read: “The Tajik language is the language of peace and culture.”