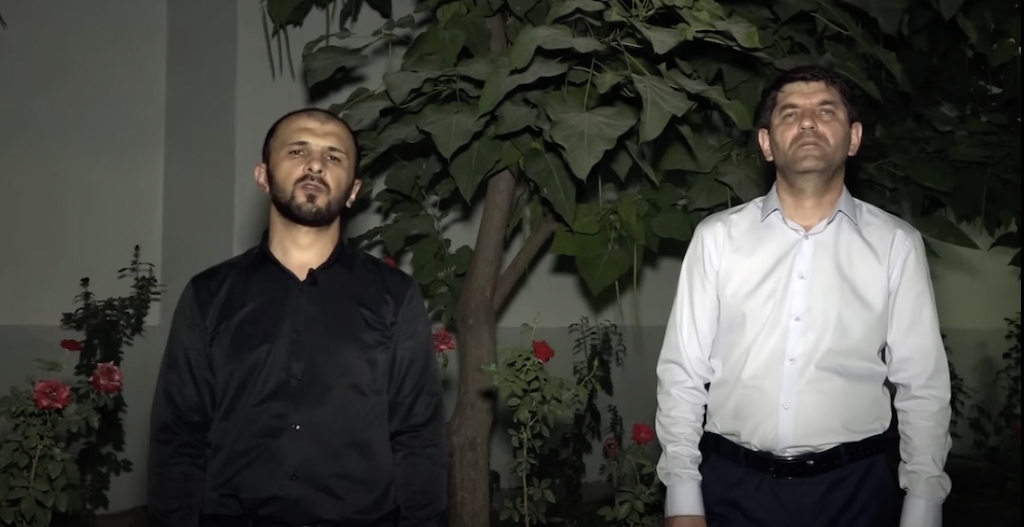 Ramzi and Oraz Vazirbekov, two Pamiri activists formerly based in Moscow, giving what appears to be a forced confession after being returned to Tajikistan last month.

Tajikistan’s courts have become a revolving door for people arrested on suspicion of involvement with pro-autonomy activism in the country’s restive eastern Pamirs region.

To make matters worse, few of the accused in the Gorno-Badakhshan Autonomous Region, or GBAO, have access to legal representation. The alarm has been raised on that front by the International Commission of Jurists.

“Reportedly, there are only four lawyers officially registered as members of the Bar Association in GBAO per 250,000 residents. Such a rate is clearly inadequate,” the ICJ said in a statement at the start of this month. “At present, defendants in dozens of cases are without any legal representation despite the fact that many among them face long-term prison sentences if they are convicted.”

Local bar association representatives have since put the number of lawyers active in the GBAO at seven – still a very small number.

This situation is the culmination of a violent government crackdown in the GBAO in May-June that was unleashed in response to protests.

Trials of people accused of allegedly fomenting unrest during that turbulence have typically been rushed. Severe sentences are handed down following secretive trials lasting only a few days.

Details are known about the fate of some of the more prominent figures.

On July 26, the State Committee for National Security, or GKNB, the successor agency to the KGB, detained authoritative Ismaili cleric Muzaffar Davlatmirov, 58, on charges of incitement to extremist activities. According to the Telegram account of Pamir Daily News, an outlet covering events in GBAO, Davlatmirov was sentenced to five years in prison by August 3.

None of his supporters and relatives were allowed to attend the trial. It is not at all clear what specific act he was accuse of committing.

Hasanali Abdurakhmonov is the 25-year-old son of well-known Pamiri community leader Tolib Ayembekov, who was arrested in June. Abdurakhmonov was arrested on July 23 and sentenced to 12 years in prison on hooliganism and weapons possession charges on August 1.

Another of Ayembekov's sons, 33-year-old Gulomali Ayembekov, was also detained on July 23. He was sentenced to life in prison on August 5 on a charge of murdering the head of the GKNB’s GBAO department, Abdullo Nazarov, in 2012.

Pamir Daily News sources from Khorog relayed news that Aslan Gulobov, another resident of the capital of the GBAO, Khorog, was also sentenced to life imprisonment for the Nazarov murder.

This only lengthens the list of people supposed to have murdered Nazarov. Tolib Ayembekov’s brother, Okil, and Ayembekov’s driver, Hamza Murodov, were imprisoned on the same charge in 2012, the year of the murder.

One of Gulobov’s brothers has been sentenced to 18 years in prison on hooliganism and drug-trafficking charges and another is awaiting trial.

Tolib Ayembekov himself, along with two of his brothers and another son, is still in custody awaiting trial.

Hundreds have allegedly been arrested in total. The trials of around 80 people have started – and have, in many cases, possibly already ended – this month. Relatives of defendants and witnesses are as a matter of course compelled to agree to non-disclosure agreements, meaning little information is able to filter out.

When court rulings are passed, they only reach the public through anonymous informants. Even relatives are in the dark. One method they have for finding information is getting notes slipped out by fellow detainees when they visit pre-trial detention facilities to drop off food packages.

The judicial churn has extended to former officials and activists who assumed they were safe by dint of being based abroad.

The trial of a one-time senior advisor to the head of the border service, Kholbash Kholbashov, began on August 3. He too is charged with inciting the May-June unrest. Kolbashov was arrested around May 18-19, along with his ex-wife, the respected Pamiri activist and journalist Ulfathonim Mamadshoeva. He was until now best known for reportedly saving President Emomali Rahmon from an assassination attempt in the 1990s.

On July 29, Oraz and Ramzi Vazirbekov, a pair of activists from the Pamirs (it is unclear whether they are related, despite their similar surnames), were extradited from Moscow to Dushanbe. Their Russian citizenship was of little use, even though the Russian constitution bars the extradition of citizens to stand trial abroad – a rule Moscow has historically deployed to reject cooperation with Western investigators.

Immediately after being flown into Tajikistan, the Vazirbekovs appeared in a video confession claiming that they had returned to their home country of their own free will. Such forced confessions to camera are routine in Tajikistan.

The relentless crushing of GBAO activism is a money-making scheme for some. Relatives of the detainees have reportedly revealed that law enforcement officials have attempted to solicit bribes in return for negotiating milder charges.