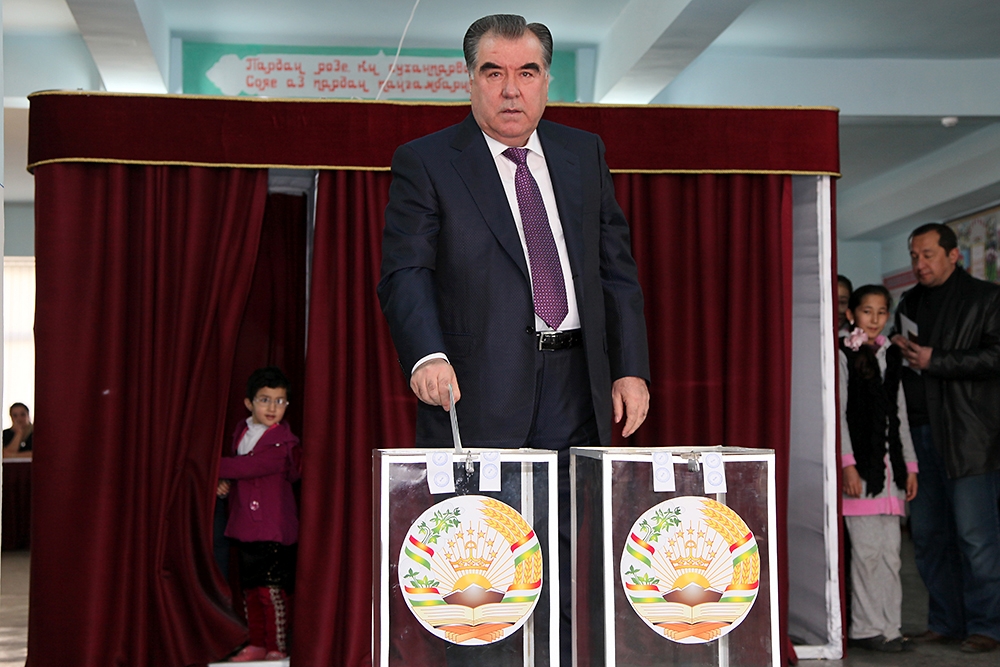 The new parliamant to Rahmon: we’ve got your back. (Photo: Tajik Presidential Press Service)

Tajikistan has been on a steady march toward authoritarianism under strongman President Emomali Rahmon for years. The country’s March 1 parliamentary elections – criticized by international observers as flawed – confirmed that the journey is complete: the results removed the last vestiges of opposition from the rubber-stamp parliament.

The opposition has long been weak, so observers are wondering: Will the absence of a parliamentary opposition make a difference in how the country is governed? And will the authorities now ban the Islamic opposition as part of their struggle to stanch the spread of religious observance in the largely Muslim Central Asian country?

Four of eight parties overcame a 5-percent threshold to enter the 63-seat lower house of parliament during the poll. Rahmon’s ruling People’s Democratic Party led with 62.5 percent of the vote, according to the Central Election Commission. Three other small parties that support the president – often called the “pocket” or “puppet” opposition – were also allowed to keep their seats.

But two critical parties that had held two seats each in the last parliament were shut out. The Islamic Renaissance Party (IRPT), which had been represented in parliament since the first vote after the civil war, in 2000, gained only 1.5 percent of the vote. The Communist Party, which had held out since the days of the Soviet Union, won 2.3 percent.

Observers from the Organization for Security and Cooperation in Europe said the vote fell far short of democratic standards and “assessed negatively” over half the vote counts they monitored. The vote “took place in a restricted political space and failed to provide a level playing field for candidates,” the OSCE said in a March 2 statement. The organization found widespread fraud, ballot-box stuffing, and intimidation of opposition candidates during the campaign.

Tajikistan has never held an election judged free and fair by credible observers, but in past elections the IRPT was allowed to take a small number of seats in parliament.

In the days after the vote, some believed the IRPT might still win a parliamentary seat in a single-mandate district race. But on March 4, the chairman of the Central Election Commission, Abdumannon Dodoev, told EurasiaNet.org the IRPT would not hold any seats.

Under the 1997 peace treaty that ended the civil war, the IRPT, representing the opposition, was assured of 30 percent of government positions. Rahmon has been gradually whittling away at that guarantee for years. The party came under unprecedented pressure during the campaign this year as candidates were disqualified en masse and party members came under attack by state-controlled media.

IRPT leader Muhiddin Kabiri said his party would not recognize the election results, though he declined to say what, if any, action the party would take. “Despite pressure on the party, no one predicted such results. I think that the elections were held with big falsifications. The [Tajik] people are the first who lost in these elections; this will not benefit the government,” Kabiri told EurasiaNet.org.

“In reality, we have not had a real parliament for the past 10 to 15 years. But at least there were always two or three critical MPs [from the IRPT and the Communist Party] who told the public what was happening and acted as a restraint on the authorities. Now there is a chance that some of the activities of parliament will be classified and not made public,” Vokhidova told EurasiaNet.org.

“The puppet MPs will easily ratify” whatever the Rahmon administration wants, she said, adding that she fears Tajikistan is becoming more like Uzbekistan, where alternative opinions are not tolerated. She expects the IRPT to be banned.

The IRPT may have been hurt by the government’s relentless anti-Islamic message in the months leading up to the poll; some government supporters publicly conflated the party with terrorists. Meanwhile, members of the state-backed clergy used their sermons to preach support for Rahmon and his party.

One popular line of thinking is that the authorities had grown afraid of the IRPT as the influence of Islam spread in recent years. Under this view, by repeatedly stoking fear of radical Islam, officials have created a narrative that justifies suppressing and ultimately closing the party. The IRPT remains the only legally registered Islamic party operating in Central Asia.

Vokhidova dismisses any comparison between the party and radicals, arguing that the IRPT actually encourages moderate Islam.

Independent political analyst Rajab Mirzo predicts Rahmon will finagle constitutional changes to ban the IRPT and “introduce a monarchy,” he told EurasiaNet.org, referring to the president’s apparent desire to stay in office indefinitely and eventually appoint his son to the top job.

Communist Party leader Shodi Shabdolov called the elections “a farce” and told EurasiaNet.org he expects parliament now will only nod and clap at whatever the president proposes. He likens the new parliament to a bird with only one wing, with nothing to balance it.

“Our government and our parliament want to fly with one wing, and I wish them good luck with this,” Shabdolov said.

Despite discontent among his followers with the election results, Shabdolov says his party sees no point in appealing. “Whom can we address? The prosecutor’s office? A court? All these [institutions] are in the hands of one party, led by our president,” Shabdolov said.

The spokesperson for the ruling People’s Democratic Party, Usmon Soleh, insisted during an interview with EurasiaNet.org that the elections met democratic standards, “just as President Emomali Rahmon said [they] would.”