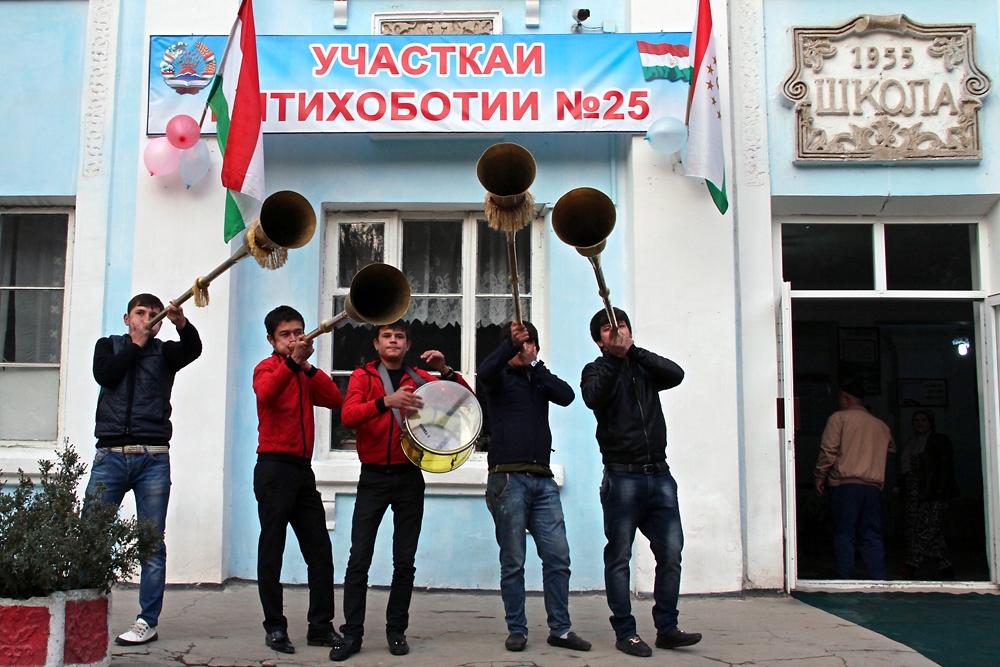 No one in Dushanbe doubted who would win Tajikistan’s presidential election on November 6; most did not expect a free and fair vote. But President Imomali Rahmon’s administration tried to put on a good show.

The incumbent, in power for 21 years, was coasting to another seven-year term late on November 6 amid accounts of intimidation, multiple voting, and a suspiciously dazzling turnout. The 61-year-old Rahmon, who is often described in authoritarian Tajikistan as “His Excellency,” ran against five virtual unknowns. The only serious opposition candidate was prevented from registering, ostensibly because she did not gather enough signatures. The disqualified candidate, human rights lawyer Oynihol Bobonazarova, maintains that authorities intimidated her supporters.

Despite widespread corruption, electricity shortages, and the highest poverty rate in the former Soviet Union, many voters said they would vote for Rahmon because they knew little about the other candidates. Throughout the country, giant billboards featured the incumbent in the weeks leading up to the race. Even a bus sent to pick up OSCE election monitors at the Dushanbe Hyatt Monday afternoon featured a large picture of the president on the windshield. It read, "My choice is Imomali Rahmon."

The OSCE's Office for Democratic Institutions and Human Rights (ODIHR) noted the lack of a campaign by Rahmon’s rivals, several of whom praised the president. State media “present extensive and positive coverage of the president’s activities,” ODIHR said in an October 22 monitoring report. “There is no visible campaign by other candidates so far.” Little appeared to change during the final weeks before the vote.

“The situation is absurd. I have come to the polling station to cross out all six names from the ballot,” said a woman at polling station # 4, speaking on condition of anonymity. The way opposition candidates were disqualified “has shown the uselessness of the elections,” she said. Voters at the polling station said they had been pressed to vote by authorities going door-to-door.

The lack of centralized voter lists worried observers, who say there was little to prevent carousel voting or other types of fraud. Tajikistan ignored OSCE/ODIHR reform recommendations. The Central Asian state has never held an election judged free and fair by credible international observers.

In the November 6 election, turnout figures drew immediate attention from foreign observers. By 6pm, officials reported that over 80 percent of the country’s 4 million registered voters had cast ballots. That number raised eyebrows among some, given that a large number of registered voters – likely over a million – are labor migrants abroad, mostly in Russia. The Central Commission on Elections and Referenda (CCER) has made little effort to enable migrants, whose remittances keep the economy afloat, to vote.

Beyond turnout, there were widespread reports of multiple voting, with one woman in Vahdat telling a RFERL correspondent that she voted on behalf of 10 family members because they were busy. Video posted on Facebook also showed women casting multiple ballots.

An international observer told EurasiaNet.org he had seen “a lot of ballot stuffing,” but said many of the perpetrators were women whose husbands and sons were abroad working. “It's not the type [of fraud] where the presiding officers blatantly stuff [ballot boxes],” he said.

Head of state since 1992, Rahmon was won elections in 1994, 1996 and 2006. Many believe he is grooming his son, Rustam Imomali, for office. Imomali is an official with national football league and has worked in customs.

Other candidates included Olimjon Boboyev, of the Party of Economic Reform, who was the 2006 runner-up with 6.2 percent of the vote; the Agrarian Party’s Ahmadbek Bukhoriyev, who placed third that time; Ismoil Talbakov, a deputy from the Communist Party, who also ran last time; the Socialist Party’s Abduhalim Ghafforov, who received 2.8 percent in 2006; and businessman Saidjafar Ismonov, representing the Democratic Party. All are seen as generally supportive of Rahmon.

Even with the lack of a strong challenger, Rahmon’s administration appeared to take no chances with the vote. Access to YouTube, Facebook and an independent news portal disappeared briefly in some areas ahead of polling. Authorities regularly block social media and independent news sites when they carry reports critical of the administration. Moreover, two days before the vote, residents of a central district in the capital were frightened by the appearance of soldiers and military vehicles on city streets. Authorities said nothing about the troop movement, fostering rumors that the soldiers were there to protect the regime in case the vote was disputed, or were deployed to intimidate voters.

Few expect any protests because Rahmon – the only face of politics in the country – is considered by many to be a safer bet than political unknowns. A voter at polling station # 3 in Dushanbe, 22-year-old Firuza, who declined to provide her last name, told EurasiaNet.org that she had voted for Rahmon because she knows nothing about the five challengers.

Rahmon has tolerated little dissent in recent years. For example, Zaid Saidov, a prominent entrepreneur who announced political ambitions this spring, was promptly arrested on charges observers call politically motivated. In addition, an Uzbek community leader and government critic disappeared earlier this year; a body that washed up later in a river was believed to be his.

“Prosecuting, beating, and holding opposition leaders incommunicado are an affront to the idea of fair elections. And for an election to be free and fair, voters need to have a genuine choice,” Human Rights Watch said of the electoral process last month.

The two main parties that backed Bobonazarova, the human rights lawyer, said they would not take part in the polls. The Social Democratic Party, which has never gained a seat in the rubber-stamp parliament, boycotted the vote because of "state-organized falsifications.” The Islamic Renaissance Party also did not take part, although it did not instruct its members to boycott.

Konstantin Parshin is a freelance writer based in Tajikistan. David Trilling contributed reporting.