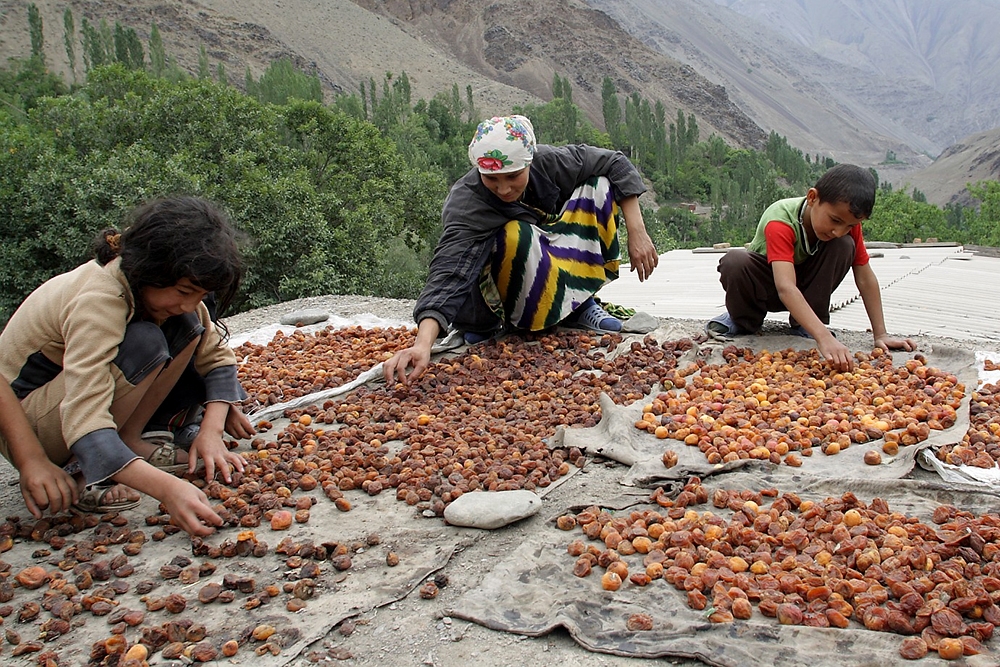 A Tajik family dries apricots near their home in October 2011. While prices for basic goods in Tajikistan continue to rise, the value of Tajik currency – the somoni – decreases and the average monthly salary in Tajikistan is currently hovering around 920 somoni (US$100). (Photo: UNDP)

Prices for basic goods are creeping up in Tajikistan, and Russia’s economic woes are forcing Tajik labor migrants to return home. That spells trouble for hundreds of thousands of Tajiks who are struggling to stay above the poverty line.

Official figures show that the average monthly salary is currently hovering around 920 somoni, which is the equivalent of around $100 at the current black-market exchange rate.

Markets in the capital, Dushanbe, are visibly less crowded these days. Everybody grumbles at how much, and how fast, things are becoming more expensive. If a month ago, a liter of sunflower oil cost 10 somoni, the same now costs 15 somoni. A kilo of sugar was five somoni, now it is eight somoni. Chocolate sweets used to cost 50 somoni per kilogram — but the price is now 65 somoni. The trend is the same for other common staples, such as potatoes and onions.

There has been particular alarm about the rise in the price for flour, which went up over 20 percent within a 10-day span in January. At the same time, prices for some locally sourced goods have remained either stable or gone down. Beef cost 35-38 somoni a kilo in the summer, but that has gone down to 30 somoni. That is slim consolation though — the price at the year’s end was under 30 somoni.

Many are struggling to keep pace with inflation. Gulbahor Tursunova, 27, works as a seamstress out of her home, which she shares with her retired parents. The crisis has hit her household hard. “I practically don’t have any customers left. Nobody brings me clothes to sew. Before the crisis began, I made about 200-300 somoni daily,” Tursunova said, adding that her former clients tell her that they are economizing.

Some say they have had their husbands deported from Russia. About 333,000 Tajiks are currently banned from going to Russia because of various legal issues.

One person told Tursunova that her brother had returned home after failing to find work. “Right now we’re surviving off my parents’ pension, which is 1,200 somoni ($133) in all. All my rainy day savings are coming to an end,” she said. “I don’t want to tell my parents, because they will only worry. They are getting old and they suffer from high blood pressure, so they have to take medication all the time.”

The drugs take a 300 somoni chunk out of the household’s monthly budget, Tursunova said.

Tursunova said she now buys second-grade flour and tells her parents that it is just as well, since it might be better for their health. “Meat, milk, cream — we are buying all these things much more seldom these days. All we have on the dastarkhan (tablecloth) these days is bread and tea. We make soup all the time and comfort ourselves with the thought that it is better for our health than fatty plov or manty, which can be heavy on the stomach,” she said.

President Emomali Rahmon has stated that the poverty rate in Tajikistan has fallen to 31 percent of the population at the end of 2015. Inflationary pressure could push the rate back up this year.

Traders link the spike in prices to the dismal performance of the national currency. The official exchange rate on February 2 was 7.84 somoni to the dollar, which represents roughly a 12 percent drop from the start of the year.

But it is impossible to buy dollars from banks anymore, so people turn to the black market. Moneychangers there want 900 somoni for a hundred dollar bill, which is about 15 percent more than they were asking at the start of the year.

Amriddin Hotamov, a government employee, makes around 1,000 somoni a month. Last year, his salary came to around $200, and even that was barely enough, he said. “I have three small children,” Hotamov said. “I need to feed them, but it is hard for me to do that now. My heart aches when I think that I might not be able to feed them well enough, not be able to buy them everything they need, and not dress them. I can’t see any way out.”

Hotamov said some of his colleagues had cars given to them by family members. Those friends then earn some extra income by moonlighting as taxi drivers, using their cars. “But I don’t have that,” Hotamov added. “I am even willing to work as a night guard to make some extra money, but there are no jobs going. And everybody coming back from abroad is saying the same thing — that there is no work to go around.”

Purchasing power is falling inexorably. Most people have long given up on buying the odd luxury item.

Remittances for the January-September period in 2015 dropped about 65 percent to $1.054 billion, compared to $3.016 billion over the same period the previous year.

Economists are warning that conditions could worsen in 2016. During his annual address to parliament at the start of 2015, President Rahmon promised to hike salaries and pensions in April that year, but budget shortfalls meant he was unable to keep that pledge.

That did not stop him for making the same promise again in this year’s address.

Police officers and military personnel are to get a 15 percent wage hike, teachers will get 20 percent, and workers in social care institutions will get 25 percent raises. Pensions are set to rise by 20 percent. Stipends to students will increase 30 percent. The minimum salary will go up 60 percent, from 250 somoni to 400 somoni.

Rahmon promised that, and more.

Businesses are finding it hard to share in the optimism.

One mobile phone retailer told EurasiaNet.org on condition of anonymity that he is forced by the sliding somoni to constantly change prices for his wares. “We are the official representatives for Samsung, and obviously we have to sell at the price that they want. For example, if a Samsung A5 cost 1,800 somoni at the end of last year, now that has gone up to 2,300 somoni. The Edge brand has gone up to 5,000-6,000 somoni. Buyers are in shock, so sales have just come to a halt,” he said.