Emomali's hands-on management style appears designed to cast him in the role of the listening leader. 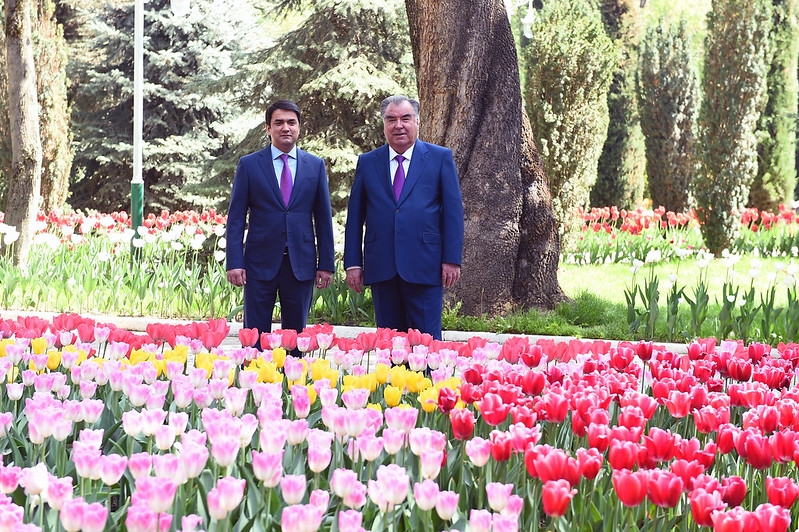 There was a time when trouble-stricken citizens in Tajikistan turned to the president, Emomali Rahmon, with public appeals for help.

No longer. It is now Rahmon’s 34-year-old son, Rustam Emomali, the oldest of at least nine offspring and the presumed successor to the presidency, that is targeted with those petitions.

Emomali appears to be relishing in his mounting profile. He already enjoys far-reaching formal influence as it is. He has served as mayor of the capital city, Dushanbe, since early 2017 and was then made speaker of the upper house of parliament in April 2020.

Because of that latter position, Emomali is officially tasked with taking over the running the country should President Rahmon ever become incapacitated.

A referendum in 2016 led to a change in the rules to lower the age threshold for people aspiring to become president from 35 to 30. And so, there is speculation that the transition might even have happened before now were it not for a series of major crises, from the COVID-19 pandemic to the toppling of the government in next-door Afghanistan.

Emomali’s use of populist, mood-raising policies began at the start of his stint as Dushanbe mayor.

One of his earliest decisions was to restore the practice of celebrating the New Year holidays with Christmas-style jollity. Government officials had before then repeatedly argued that Father Frost, a Russian-originated analogue of Santa Claus, and festive trees should be barred from public life because they were not traditionally Tajik.

Fast-forward to more recent times and Emomali has been getting involved in some high-profile public dramas, where an aspiring statesman might normally be expected to step back.

As is common in Tajikistan among men of considerable financial means, Davlyatov had taken a second wife. In an apparent fit of jealousy, the first wife, Aziza Davlyatova, in August kidnapped and strangled the second wife, Madina Mamadzhanova, leaving her in a coma. Mamadzhanova was admitted to hospital but died in December.

Davlyatova managed initially to evade serious legal consequences by availing herself of a nationwide amnesty. But the whole episode began causing loud grumbling amid mounting allegations that Davlyatova had managed to use her connections to avoid a lengthy prison sentence.

In an unusual development, the Senate in October announced that Emomali was personally looking into the matter. Before long, law enforcement bodies were pressed by the legislature to review the whole case. As a result, two Interior Ministry officials and one from the General Prosecutor’s Office were fired. Davlyatov was sentenced to 8.5 years in prison in connection with the case, while his wife, who stands accused of executing the deadly assault, was ordered to serve 11 years behind bars.

The episode marked something of a shift in how Emomali has been viewed.

And so when there was fresh talk in November that the house-museum of Tajik writer and intellectual Sadriddin Ayni, who died in 1954, was to be demolished and replaced with a hotel, opponents of the move turned to Emomali. The effect was almost instantaneous. Within days, the hotel plan was scrapped.

In mid-January, Emomali complained publicly about the quality of service being provided by mobile telecommunications companies. Within less than two weeks, mobile internet service providers began sending SMSs to their clients to inform them that connection speeds were poised to increase dramatically. And the improvement in service would come at no additional cost, they said.

Even the beleaguered people of the Gorno-Badakhshan Autonomous Region, or GBAO, appear to see Emomali as a more viable reference point than President Rahmon.

The capital of the region, Khorog, has for months been suspended in a state of high tension amid fears that government troops intend to unleash a security sweep in a long-planned response to the protests that roiled the city in November. When a local lawyer and politician Faromuz Irgashev addressed a video appeal on behalf of the GBAO’s civil society for the government to refrain from intimidating ordinary members of the public, he did so in front of a portrait of President Rahmon. But he addressed his message specifically to Rustam Emomali in his capacity as speaker of the Senate.

Emomali has yet to make any public statements on the unfolding situation in the GBAO.

Alim Sherzamonov, a politician from the GBAO now based in Europe, argues that people see in Rustam at least the illusion that something might change under his stewardship.

“The people of Tajikistan are pretty tired of Rahmon and if he was substituted at least by Rustam, that might instill some degree of hope into people’s hearts,” he told Eurasianet.

The topic of dynastic succession mechanisms are the order of the day in the region at the moment. In Turkmenistan, President Gurbanguly Berdymukhamedov signaled earlier this month that he was set to step aside as leader. Lawmakers then quickly announced an election would be held on March 12. Berdymukhamedov’s son was immediately named as a candidate and will now beyond all doubt win the vote, thereby marking Central Asia’s first father-to-son handover of power in modern history.

Political analyst Parviz Mullojanov said that the direct petitions to Emomali are a reflection of the breakdown in the normal mechanisms for communication between the public and the state. People see no other option for solving their problems, he said.

With that having been said, Mullojanov argued, it is unclear that the image of Emomali as problem-fixer is likely to ultimately have much impact on how and when he takes power.

“With us, even if you have a zero popularity rating, you can achieve any position. Whoever the president appoints will be his successor, regardless of that person’s level of personal popularity. Elections are a game for the United States and Europe,” said Mullojanov.