The conscripts, generally Tajikistan’s poorest young men, are brutalized into service. And they are the country’s first line of defense. 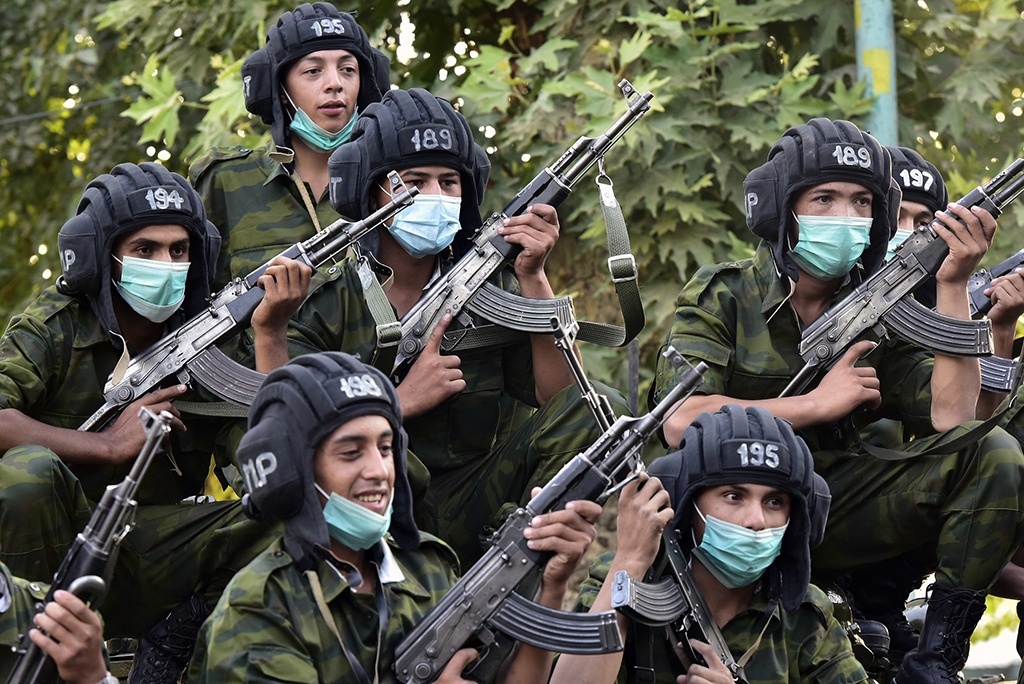 Conscripts greet the president this summer in Panj district, near the Afghan border. (Tajik presidential administration)

After the Taliban seized Kabul in August, Tajikistan adopted a bellicose line: Any new government in Kabul must include more ethnic Tajiks in its ranks, President Emomali Rahmon demanded.

Tajikistan releases little information about its military, but the violent way it recruits does not give the impression this remote and corrupt former Soviet republic has a battle-ready army. In 30 years of independence, the country has never stood up a professional fighting force; instead, it largely relies on poorly fed conscripts to guard the 1,400-kilometer border with Afghanistan. Russia is theoretically standing by to help defend Tajikistan in case it is attacked, but Moscow has a habit of ignoring requests for help from allies.

Autumn in Tajikistan is draft season, when young men hide or flee the country to avoid being press-ganged into service.

Tokhir Nadzhmiddinov, 20, is a third-year student in St. Petersburg, Russia. As much as he’d like to return to Dushanbe to visit his parents, he avoids the trip, afraid he could be caught and forced into the military.

“If I go home, it’s not certain that I will be able to return to school again,” Nadzhmiddinov explained.

In the former Soviet Union, oblava – which loosely translates as “round-up” – is the practice when men in civilian clothes roam cities and kidnap young men of draft age. They force the boys into a car and take them to a military unit for conscription.

According to Dilrabo Samadova, the head of the Office of Civil Liberties, an NGO in Dushanbe, these raids are illegal, but enlistment officers resort to the practice to fulfill government draft quotas: 8,000 boys in spring and 8,000 in fall. (The government does not publish figures on the total size of the military.)

“There is no such term as ‘round-up’ in the law. Catching people on the street is an abuse of authority by a civil servant. This is the theft of a person,” Samadova told Eurasianet.

Young men between the ages of 17 and 27 are required to serve for two years. For their service, they receive $2-3 dollars per month. Exemptions are issued for health reasons and to young men who are a family’s sole male heir. Since last year, young men have been prohibited from leaving the country without first performing their army service.

It is a brutal existence, by most accounts. Stories abound of meager rations and disease; ritual hazing – a Soviet-era practice known as dedovshchina – remains common.

The wealthy and well-connected bribe their way out of service.

2021 has been typical: Every year during the call-up, videos appear on social networks showing people in civilian clothes pushing young men into cars. Passersby are so accustomed to the phenomenon that most know what’s going on without even getting a close look.

Last month, the athlete Bobokhon Mirzozoda, who was supposed to represent Tajikistan at an international sambo competition in Tashkent the next day was detained at home and conscripted, according to a report by the exiled Tajik newspaper Bomdod.

Mirzozoda’s mistake: He reportedly didn’t offer a bribe, thinking he would be released when the enlistment office discovered he was about to carry the Tajik flag at a sporting event abroad. Now that his case is public, there is little he can do but serve.

Dozens of such stories appear every year.

Shakhboz Gadoyev, 22, had just moved to Dushanbe to begin working for national television when he was detained on October 7 in the capital.

His sister, Shakhnoza, explained that Shakhboz, the family’s sole breadwinner, was wrapped up like a parcel and taken in a car. She knocked on every door, but none of the relevant government offices paid attention to their situation. It took two weeks to discover his whereabouts. She is not sure how her family will eat in his absence, but it is the hazing she fears most.

Because the conscripts often serve far from home, are not allowed visitors, and do not have access to a telephone, little news about the abuse emerges until someone dies or is seriously injured, said Samadova of the Office of Civil Liberties.

The hazing is organized under a strict social hierarchy, explained Rustam, who completed his service three years ago. Recruits are first known as a “spirit” (dukh), before graduating to become a “grandfather” (ded). Only the commanders can beat the grandfathers, who in turn take out their anger on the spirits.

Rustam recalls a particularly painful episode when he laughed at a commander’s joke. “As a rule, spirits are forbidden to laugh. He grabbed me by the scalp and lifted me about a meter off the ground. I thought the skin was tearing off my skull,” he told Eurasianet. (Eurasianet is withholding Rustam’s family name to protect him from retribution).

Shokirjon Khakimov, a lawyer and deputy chairman of the wholly sidelined opposition Social Democratic Party of Tajikistan, believes the hazing and poor treatment not only discourages young men from serving, but weakens the country’s defenses.

“All this affects our combat effectiveness and combat readiness, as a result of which the country may not provide adequate resistance to external threats and dangers,” Khakimov said.

For decades, human rights activists have lobbied for legislation that would allow families to pay – officially, rather than as a bribe – for their sons to be released from the draft. The idea is that codifying the payments would channel the money to the state budget instead of commanders’ pockets, ideally to better care for conscripts.

This July, the government agreed, establishing an alternative one-month service, which must be accompanied by a payment of just over $2,200. (The average monthly salary in Tajikistan is no more than $120).

The Defense Ministry has said the fees will be spent on bettering living conditions for the recruits. But lawyer Navruz Odinaev, who advocated for the payments to be introduced, told Eurasianet that this is not happening.

Meanwhile, rank-and-file Taliban look like crack troops compared to the skinny Tajik recruits stationed along the border. Dushanbe seems to be taking a risk with the nation’s defense at a time of such momentous change in the region.

“We need to switch to a professional army. I do not understand how recruits who are forcibly conscripted, then beaten up to force them to fulfill their obligations, can be useful,” Samadova said.