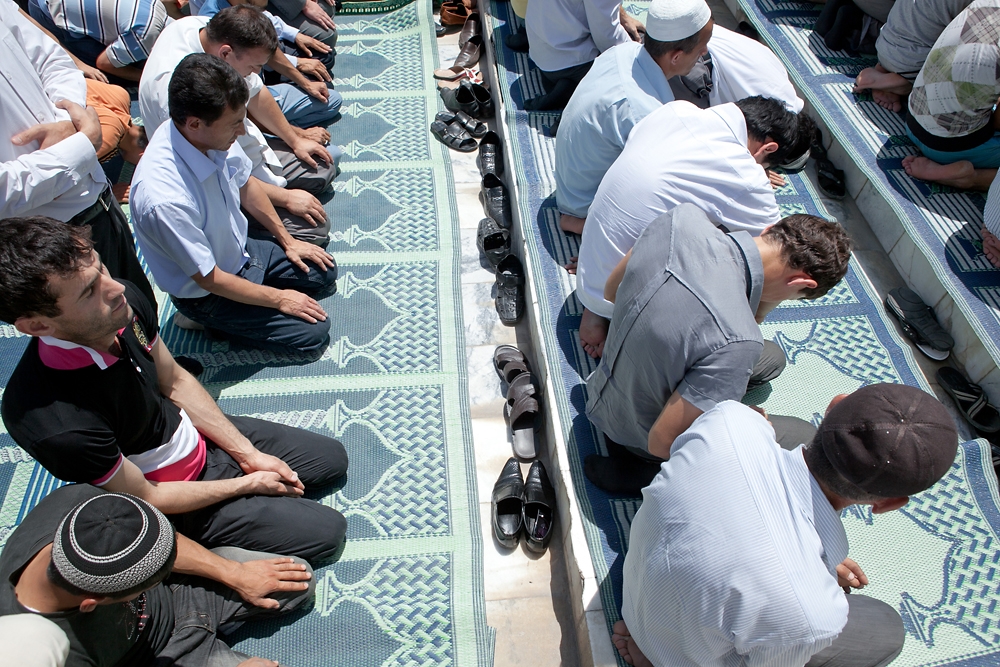 With majority funding from Qatar, a new $100-million mosque in Dushanbe will be able to accommodate 115,000 Tajik Muslims. (Photo: David Trilling)

Imomali Rahmon, Tajikistan’s president, celebrated his 59th birthday in a most unusual manner. On October 5, appearing on national television and sporting a hard hat, he got behind the wheel of an excavator and launched the construction phase of what is projected to be the largest mosque in the former Soviet Union.

The mosque will be able to accommodate up to 115,000 worshipers. Most of the funding for the project, unlike other, recent record-breaking endeavors, (Tajikistan this summer unveiled the world’s tallest flagpole and largest flag) is coming from abroad, specifically from the moderately conservative emirate of Qatar. Some observers have noted the irony of the arrangement: The emir of Qatar, a champion of Islam, is helping a Tajik government that is grudging in its toleration of religious expression. Having battled Islamists during Tajikistan’s 1992-97 Civil War, and, more recently, grappled with Islamic militants in the Rasht Valley, Rahmon’s administration seems mostly interested in controlling Islam in Tajikistan, not promoting it.

Outsiders have been quick to criticize the mosque project and other government development initiatives – including faux-neoclassical palaces that have sprouted across Dushanbe – as an extravagant waste of money in the former Soviet Union’s poorest state. But many locals express pride in the city’s makeover. “The government is recognizing the needs of the people. We are a Muslim country and this new mosque will show this to the world,” said 22-year-old Davlatbek Jukulov, a business student at the Tajik National University. “It will put our small nation on the map!”

The Qatari government will foot some $70 million of the mosque’s $100 million price tag. When completed, the mosque will dwarf the current record holder in the former Soviet Union, the Kipchak Mosque in Turkmenistan.

So why has the tiny gas-rich emirate of Qatar taken an interest in mosque building in Tajikistan?

“They do this act of charity in order to build up a positive image in the country which may favorably place Qatar when it comes to future investments,” said David Roberts, deputy director of the Qatar branch of the Royal United Services Institute, a security think-tank.

In August, Qatar’s state-owned Diar Real Estate Investment Company inked a deal to build a $180-million luxury residential complex, “Diar Dushanbe.” The development will include 300 apartments, a conference hall, a five-star hotel, shops and a “waterfront promenade” on a man-made lake. Diar promises to create 1,500 jobs during the construction phase and provide 400 permanent positions when completed, the company said in an August 25 press release.

“They are trying to gain a foothold in an emerging region,” said Roberts. Even though the mosque may be a symbolic investment in Tajikistan, the project is “great PR for the government of Qatar,” within the Muslim world, he said, adding that Islam plays a prominent role in Qatar’s foreign policy.

At first glance it may seem puzzling that Tajikistan, a country that tries to tightly control Islam, should want to build the region’s largest mosque. Indeed, it seems to defy a trend. In recent years, the Tajik government has closed unregistered mosques and madrassas, harassed bearded men, banned children from mosques, and coerced students studying Islam abroad to return home. Early this year, the state also issued a list of approved sermon topics.

“The government has closed down mosques everywhere. They are now turning many of them into gyms and medical clinics,” said a Dushanbe imam whose mosque was shuttered in January because he could not get proper registration papers. “It is just like Soviet times.”

From the imam’s perspective, the new mosque is a way for the state to extend its control over religion. “Dushanbe has around 700,000 people. Most of these are women and children who cannot go to the mosque. This new mosque will be able to house nearly every Muslim man in Dushanbe and the government can dictate what they learn,” he said.

That’s if the mosque is ever finished. It is expected to take four years to build, but it has already taken four to get this far. The initial agreement was signed back in 2007. Rakhmon laid the first stone during a televised ceremony in 2009.

The mosque project “fits perfectly with the government's policy” on religion, said analyst Alexander Sodiqov. “The mosque will make it easier for the authorities to monitor and control what is preached in Dushanbe. After all, one large mosque is easier to control than 20 smaller ones.”