Tajikistan: Rally in Pamirs ups the ante in confrontation with government

The authorities do not tolerate public shows of discontent, making this a notable event. 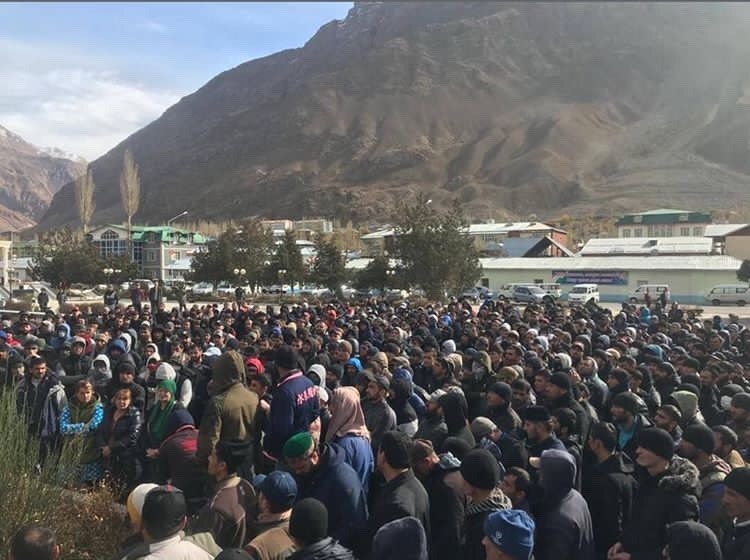 Residents in Tajikistan’s Pamiri town of Khorog mustered for a rare protest rally on November 6 in a demand for a deescalation of the security sweep targeting their region.

Nerves in the Gorno-Badakhshan Autonomous Region, or GBAO, have been strained since a reported police shooting over the weekend that left at least two people wounded.

A series of photos of the rally posted on social media showed what appeared to be many dozens or possibly a few hundred in attendance. Such is the level of repression in Tajikistan that demonstrations of this type almost never take place, so the scale of the assembly is particularly notable.

The day also marked Constitution Day, which President Emomali Rahmon chose to mark by visiting his hometown, Danghara, which is in the south of the country, near the border with Afghanistan.

It was Rahmon’s remarks in mid-September that first cast the current pall of unease over GBAO. While visiting Khorog at the time, he lashed out at all his top security officials, complaining about what he alleged was a wave of criminality washing through the Pamirs. He provided no firm examples of what he meant by this, but spoke only of a handful of criminals he argued were sowing the seeds for future unrest through their misdeeds.

As a result, GBAO has become target of intensified security operations, which have included the installation of multiple checkpoints to keep tabs on the movements of the region’s relatively small population.

Khorog residents have been bristling for weeks, but that irritation escalated into anger at the weekend, when a policeman allegedly fired from his car into a group of local men with a traumatic pistol, a type of firearm that discharges powerful but typically non-lethal rounds.

Demonstrators who gathered before the town hall demanded, among other things, that the policeman be brought to justice.

Subhon Sabzaliyev, a 31-year-old resident of Khorog, who was one of the people shot, said that the incident occurred shortly before midnight on November 4. He identified the man who shot at him as Khurshed Muhammadzoda, a commander with the OMON riot police. Sabzaliyev said Muhammadzoda was a recognizable figure whom residents had seen often at police checkpoints around Khorog.

But RFE/RL’s Tajik service, Radio Ozodi, which has in recent years routinely taken to serving as a mouthpiece for Tajikistan’s authorities, cited law enforcement officials as saying that the shooting incident was instigated by a local powerbroker called Khursand Mazorov.

The outlet claimed that the group allegedly attacked by Muhammadzoda had itself previously vandalized a police service vehicle on Mazorov’s orders.

“In this way, they wanted to interfere in the work of law enforcement forces and to raise tensions in Khorog. The police officer was compelled to open fire from a traumatic weapon,” Ozodi quoted unnamed law enforcement officials as saying.

The true motivation for the GBAO security sweep is something of a conundrum. Rahmon insists the region is riddled with crime, and to such an extent that it is even keeping tourists away. Visitors rarely complain of any issues with safety in the Pamirs, however.

Indeed, when a group of self-proclaimed Islamic State adherents recently killed a group of foreign cyclists in Tajikistan, it occurred nowhere near the Pamirs, but rather just outside Danghara, Rahmon’s hometown. Likewise, the sometimes violent incursions by drug traffickers from Afghanistan almost all occur in the Khatlon region, the southern region that is home to the bulk of the Tajik elite, including Rahmon.

All the same, Ozodi cited its security sources as saying the GBAO crackdown has put a stop to the flow of narcotic and weapons from Afghanistan.

An alternative reading is that the Pamirs are the final region in Tajikistan to have contrived to defy total submission to central authorities. What is more, the region’s informal leaders, whom Rahmon has placed in his sights, are widely reputed to be heavily engaged in smuggling activities and it is believed they may be raking in profits without sharing their income with their government interlocutors.

The rally in Khorog was apparently large enough to persuade the recently appointed acting GBAO governor, Yodgor Faizov, to come out and meet the crowd. In video footage of his exchange with the demonstrators, a woman is heard telling Faizov that “they shot at my son.”

“To whom do we take our complaints when it is the police themselves that are doing the shooting,” the woman says.

The woman added that if her son were guilty of anything, she would want him arrested, but that this shooting happened before her own eyes.

“Today they are shooting at him, tomorrow it will be somebody else. I am a mother, and all us mothers are afraid for our children,” she said.

Faizov conjectured that there might be another version of events.

“In order to understand what happened, we need to go the spot and look into it. We will go with you and your son and figure it out,” said Faizov.

At this, the crowed began heckling Faizov and demanding that the shooter present himself and account for his actions.

Faizov and Muhammadzoda, the OMON officer have reportedly also met but there are no details as to what emerged from that encounter. Khorog residents warned that they would pitch tents outside the town hall and remain there for three days unless the matter was resolved.