Gurbati had been a target of a smear campaign by pro-government trolls. 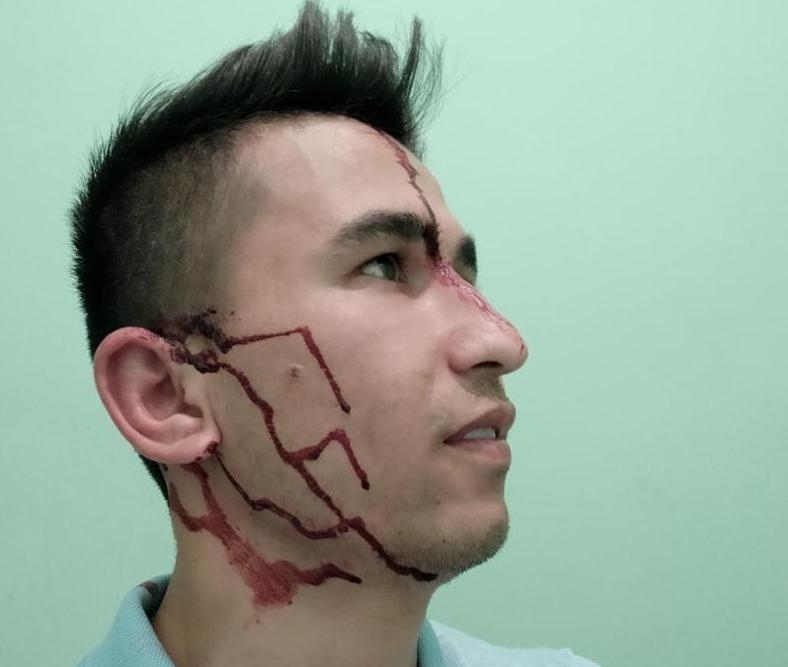 Abdullo Gurbati, a journalist for Asia-Plus newspaper, one of Tajikistan’s last surviving independent media outlets, was left bloodied after being assaulted by unknown individuals on May 11.

The reporter had recently been the target of a smear campaign by online trolls understood to operate at the behest of the security services, which has for decades taken the lead in repressing non-government media, activists and opposition politicians.

Asia-Plus said in a report on the attack that it took place at around 9:30 p.m. near Gurbati’s apartment in Dushanbe. The reporter tried to get treatment for his injuries at three clinics, but was turned away from each one on the grounds that they are already swamped with coronavirus patients.

Gurbati, 23, has over the past two months focused much of his work on mounting evidence that Tajikistan was confronting a coronavirus outbreak that the government was staunchly denying up until April 30. One of his on-the-street video reports saw him questioning members of the public about whether they were concerned about the incipient health crisis and whether they were aware of best practices for avoiding contracting COVID-19.

This coverage earned him the attention of government-linked online trolls, who accused him on social media websites of taking money from foreign-based opposition groups and described him as a traitor to the nation. One particularly crass video uploaded to the internet – which included, among other things, a snippet of the World Health Organization’s country representative validating Tajik government insistence that the country was coronavirus-free – showed Gurbati’s face crudely photoshopped onto a virus.

Gurbati had previously told colleagues that he has received phone calls from operatives with the State Committee for National Security, or GKNB, the successor agency to the KGB, threatening him with the prospect of criminal prosecution.

These are not idle threats.

Another young journalist, Daler Sharipov, was in April sentenced to one year in prison on charges of incitement to religious hatred. The basis for the charges was that he had cited banned religious literature in one of his tracts, although people familiar with Sharipov’s work said it specifically made the argument that Islam did not justify acts of terrorism.

Tajikistan has repeatedly come under fire over its repressive practices toward journalists.

In mid-April, the Justice for Journalists Foundation singled Tajikistan out as a nation of particular concern.

“Tajikistan leads the region in the number of media workers subject to accusations of extremism, links with terrorists and inciting hatred. Intimidation of family members of journalists is also characteristic of Tajikistan, including their harassment, interrogation, detention and arrest,” the foundation said in a statement.

Over the period from 2017 to 2019, the fund identified 81 attacks on journalists in Tajikistan. The attackers have typically been government officials. The known assaults, however, are likely only the tip of the iceberg, since many opt to refrain from publicizing their situations for fear of yet further reprisals.

The coronavirus crisis has only exacerbated this problem.

Journalism advocacy group Reporters Without Borders in April called on the Tajik government to end the harassment of journalists trying to learn more about the public health situation.

“The lack of transparency since the start of March is encouraging disinformation,” the group said at the time. “Articles 6 and 24 of Tajikistan’s media law specify circumstances in which the authorities can refuse to answer journalists’ questions, but a public health situation is not one of them.”