The second generating unit of six planned has been put into operation. 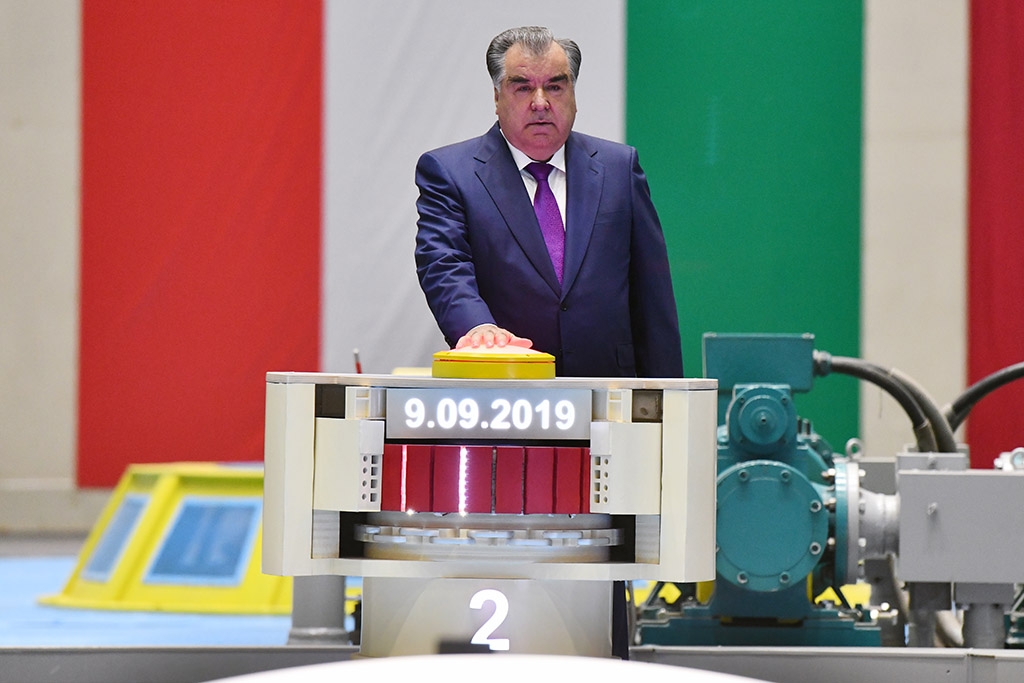 Tajikistan has brought the second generating unit at its giant Roghun hydropower plant project online, but with a five-month delay. And mystery persists as to where Dushanbe is going to find the money to continue works.

“The day is not distant when our free and independent Tajikistan will be on a par with the world’s most developed nations, and the beloved fatherland of Tajik becomes a more bountiful and prosperous land,” he said.

The presidential press office said in a statement that a $287 million spillway tunnel, designed to allow the outflow of up to 3,500 cubic meters of excess water per second, was also commissioned.

Even at this relatively early stage, the Roghun project is already running late. In a 2017 bond prospectus prepared by the Finance Ministry, it was estimated that the second generating unit would already be in operation by April 2019.

Officials have not commented publicly about what caused this delay, but there have been sporadic and unconfirmed reports of workers not being paid. Local media had even reported in early March that output at the one operating generator was temporarily suspended because of maintenance work.

If Roghun is completed, the dam will tower 335 meters and become the highest of its kind ever built. Construction is being carried out by Milan-based Salini Impregilo.

As Salini Impregilo outlines in a financial report published in June, the framework agreement it reached with Dushanbe to build Roghun was split across four lots. The largest of these lots, worth $1.9 billion, was for construction of the rockfill dam.

Salini Impregilo notes in its report that it expects an additional lot to be assigned this year, but it is unclear where the money will come from. The Italian company alludes to government approval for the issue of $1 billion worth of bonds, which poses something of a puzzle.

In September 2017, Tajikistan placed $500 million worth of international bonds with the express aim of funding project.

Much of that money appears to have been eaten up already. RFE/RL’s Tajik service, Radio Ozodi, reported last month that the government has earmarked 1.8 billion somoni ($191 million) toward work on Roghun this year. Of those, around $148 million are being taken out of what remains from the funds raised through the 2017 Eurobond sale.

Jamoliddin Nuraliyev, the deputy chairman of the National Bank and son-in-law of the president who masterminded Tajikistan’s first foray onto the international bond market, said in July that no repeat bond sale is planned for the foreseeable future.

While Nuraliyev was bullish about the availability of cash, Finance Minister Faiziddin Kahhorzoda told Asia-Plus newspaper on August 2 that the government has set up a special commission dedicated to sourcing more funds.

Kahhorzoda said, however, that Dushanbe is not looking to raise more debt but that it wants grants instead. Tajikistan’s foreign debt pile currently stands at $2.9 billion. This is equivalent to 35.9 percent of the national gross domestic product – a ratio that is deemed by many economists to be at the upper limit of tolerable for weak, developing economies.

Since the first generating unit went into operation, Rogun has produced 570 million kilowatt hours of electricity. These are modest beginnings. Once (and if) the whole hydropower plant is built, it will incorporate six 600 megawatt generating units. The government says it expects Rogun to generate $800 million in annual revenues by the time it is operating at full capacity. The government has said all turbines should be operational by 2025, although the currently slated end date for the project as a whole is 2033.

And then there is the small matter of the infrastructure required to actually transport all this electricity.

Everything hinges on the CASA-1000 high-voltage network that will weave together potential hydropower giants like Tajikistan and Kyrgyzstan with countries like Afghanistan and Pakistan, where demand for electricity is projected to rise steadily in the coming decades. CASA-1000 too has, however, been bedeviled by delays.