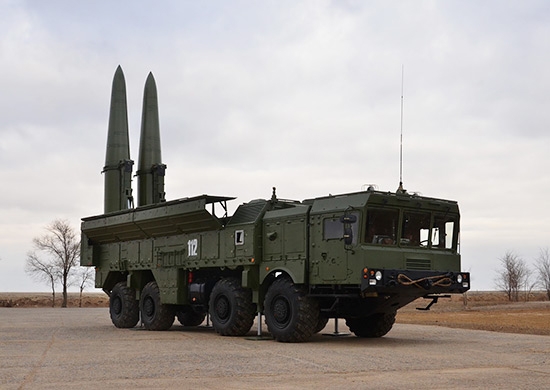 Ten-day military exercises in Tajikistan by a Moscow-led security alliance have seen the renewed deployment of a short-range ballistic missile system recently introduced to the region.

TASS news agency cited Yaroslav Roschupkin, a spokesman for Russia’s Central Military District, as saying on November 17 that an Iskander-M complex fired rockets from the Lyaur military range, just south of Dushanbe, over a range of 130 kilometers at a dummy terrorist training camp. The target was at a location in the Harbmaidon training ground, close to the border with Afghanistan.

Roschupkin said the Iskander-M had struck its target to within a 10-meter degree of accuracy and that the test had confirmed the system’s “invisibility to detection equipment.”

The deployment of the missile system is part of the closing chapter of the three-stage Combat Brotherhood 2017 exercise bringing together troops from member states of the Collective Security Treaty Organization — Russia, Armenia, Belarus, Kazakhstan, Kyrgyzstan and Tajikistan. The stated aim of the drill, which concludes on November 20, was to destroy a terrorist camp in the mountains. More than 5,000 military personnel, 60 planes and helicopters, and 1,500 items of weaponry and other equipment have been deployed over the course of the exercise.

The use of the Iskander-M in this theater raises some perplexing questions, however.

The system was initially brought to Tajikistan in May for use at anti-terror exercises by armed forces from the Commonwealth of Independent States, another post-Soviet bloc. That marked the first ever use outside Russia of the Iskander-M, which is capable of delivering nuclear payloads and is designated by NATO as the SS-26 Stone.

On that occasion, a missile was launched from an Iskander-M at the Lyaur training polygon toward a target around 120 kilometers away in the Kadobiyon district, also just a few minutes drive from the Afghan border. That test too was deemed a roaring success, according to officials cited by Sputnik news agency. An analyst writing for Sputnik wrote in glowing terms of the Iskander-M’s “jeweler-like accuracy.”

Russian forces could, if they wished, use their Iskander-Ms to fire missiles much further. The system’s designers state it can strike targets accurately within a radius of between 50 to 500 kilometers. In September, Russia’s Defense Ministry announced it had successfully test-fired an Iskander-M missile over a distance of 480 kilometers from the Kapustin Yar range in southern Russia into Kazakhstan.

In another test outing with the Iskander-M in Tajikistan, in July, a missile tipped with electronic pulse-emitting equipment was launched over 260 kilometers. It is not immediately clear from where and to the missile was fired.

It is something of a head-scratcher what real-life targets CSTO armies would ever expect to strike with these missiles. The fictitious scenarios envisioned in Tajikistan-based exercises allow for full-fledged terrorist bases equipped with heavy weaponry and sophisticated communications gear. But if masses of militants were ever to successfully burst through Tajik lines of defense, it hardly seems likely they would stop just across the border, as the testing ranges have so far implied. The Islamic State group, whose purported growing presence in Afghanistan is cited by defense officials in Central Asia and Russia as a pretext for bolstering military readiness, has typically favored urban theaters in Syria and Iraq, for obvious tactical reasons. Southern Tajikistan is endowed with passable roads and offers up several viable options for such operations.

As it is, if the test ground for the Iskander-Ms is any reflection of where the systems are to be stationed in the long term, Russian-led forces will command land-based offensive capabilities covering large swathes of Afghanistan, extending well south of Kabul.

The signaling here may be twofold. Russia is reconfirming its indispensability to maintaining the integrity of Tajikistan’s border against would-be offensives from ill-intentioned militant groups surging in from Afghanistan. Tajikistan has resisted overtures from Moscow to allow Russian troops to return to the border-patrolling duties they relinquished in 2005. (For the record, Russia routinely denies it has any such ambitions). And by equipping itself with a weapon able to reach so deep inside Afghanistan, Russia is also making it clear that it can respond accurately, rapidly and highly destructively against any armed groupings contemplating or undertaking incursions into its strategic space.