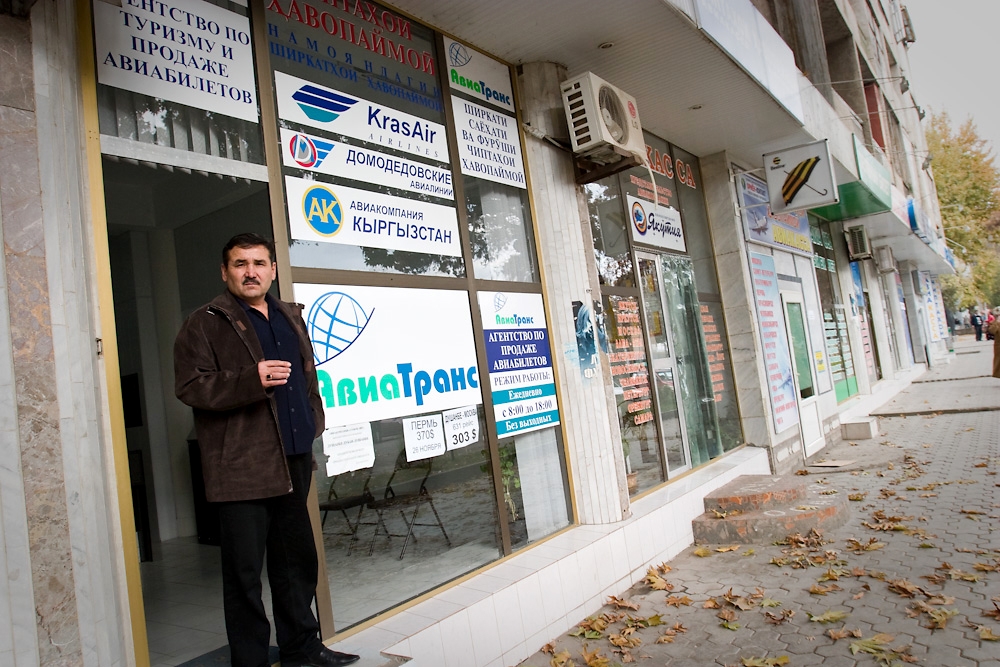 A Dushanbe ticket office, covered with airline company ads and offers written in Russian, aims to attract young Tajik migrant workers looking for employment in a Russian city. Roughly half of the Tajik economy is built on the wages earned by labor migrants abroad and sent back home to family members. (Photo: David Trilling)

When her son was born a few years ago, Manzura Sultanova anticipated he would likely leave for Russia upon reaching adulthood, as many men do in Tajikistan.

Preparing for that eventuality, Sultanova bucked a trend increasingly adopted by officials in Tajikistan and decided to keep the Slavic “ov" ending in Muhammadjon’s surname, as written on his birth certificate. She figured he might have an easier time fitting in that way.

“If we are healthy in future, God willing, I want to send him to Russia to study, because there is no hope for Tajik education,” said Dushanbe resident Sultanova, whose husband lives and works in Russia. “At least, he will be able to work in Russia without too much trouble. I don’t think that by the time my son grows up, jobs will have been created in Tajikistan.”

While a Slavic-sounding surname may ease the challenges faced by a labor migrant, a far more important factor in making a smooth transition is knowledge of the Russian language. For many migrants from Tajikistan, a poor command of Russian stymies ambitions, limits job prospects and opens the way to exploitation.

“The main thing is for Tajiks to learn Russian, so that life as migrants will not be too hard. From this perspective, Russian is a must for Tajikistan,” said Dushanbe-based political analyst Parviz Mullojanov.

President Emomali Rahmon may have had that in mind in 2013, when he asked Moscow to provide Tajikistan with mountains of Russian language manuals and an army of language teachers – one apiece for 4,000 middle schools. Instructors would be provided pay and accommodation, Rahmon promised at the time.

So far, that appeal remains unfulfilled and the prospects look remote.

Matters have become more complicated since the start of 2015, when Russian authorities introduced a language requirement for foreigners applying for work permits and visas.

Migration figures illustrate vividly the importance of Russia to Tajikistan. Roughly half of the Tajik economy is built on the wages earned by labor migrants abroad and sent back home to family members.

One Tajik official has estimated that more than 80 percent of the country’s able-bodied population works abroad, mostly in Russia. Russian Federal Migration Service data from August show that at least 1 million Tajik citizens are known to be residing in the country. An unknown number live there unregistered. By far the largest proportion of those migrants is in the 18-29 age group, a generation educated in a crumbling post-Soviet school system in which quality Russian language instruction has largely vanished.

Persuading large numbers of Russians to come to Tajikistan to teach their native tongue is unlikely to happen, Mullojanov said. “There would need to be some kind of adequate monetary compensation, and people would have to be offered suitable conditions. Doing that would be very difficult,” he said.

Vladislav Kurnushko, head of the Tajikistan office of the Russian government’s international development agency Rossotrudnichestvo, said retraining local Russian language and literature teachers would be enough to mitigate the immediate problem created by the lack of instructors. In addition, more teachers are currently being trained with funds provided under a bilateral government agreement to the Russian-Tajik Slavonic University in Dushanbe, Kurnushko said.

“For this, you have to create new, high-speed Internet connection points,” he said. “Over the last two-three years, Russia has spent a lot of money so that, for example, the Pushkin Institute could put into place a system of long-distance Russian language teaching.”

Russian government efforts to boost linguistic and cultural awareness among migrants have sometimes proven clumsy and insensitive, highlighting the need for the learning process to begin much earlier. A textbook created in 2013 under the auspices of Russia’s Federal Migration Service included practice conversations preparing students for the eventuality of arrest or having to bribe police officers.

Mikhail Petrushkov, a Tajik representative of the International Coordination Council for Russian Compatriots, said that learning Russian is, unsurprisingly, mostly pursued by young Tajiks. Command of at least three languages is the ultimate aspiration. “Parents want their children to get a good education and to have a greater access to educational resources in various languages,” Petrushkov said. “Parents understand that if they want a competitive education for their children, they need to study in Russia or Europe. So it would be just as well for their child to learn both English and Russian.”

Aspiring Tajik migrant laborers now face intensified competition from their counterparts in Kyrgyzstan, which has just joined the Moscow-led Eurasian Economic Union. Accession to the bloc has broken down bureaucratic barriers for Kyrgyz workers going to Russia – an advantage that Tajiks do not yet enjoy.

Anecdotal evidence suggests Tajiks may also be missing out on better-paid jobs because of language. “We can see this with the Kyrgyz, who have a better knowledge of Russian,” Petrushkov said. “They get the best positions.”

Petrushkov said that by increasing its educational reach Moscow could stand to gain more than just cheap labor.

“A brotherly country should extend us a helping hand. We suggest not just sending Russian teachers, but opening schools, as happened in the days of the Russian Empire,” he said. “Schools were opened everywhere, expanding the empire without any need for wars and leaving behind a culture for everybody.”