Tajikistan says it has no COVID-19, attributes new death to swine flu

The latest victim of something authorities insist was not COVID-19 was buried by medical personnel in protective gear. 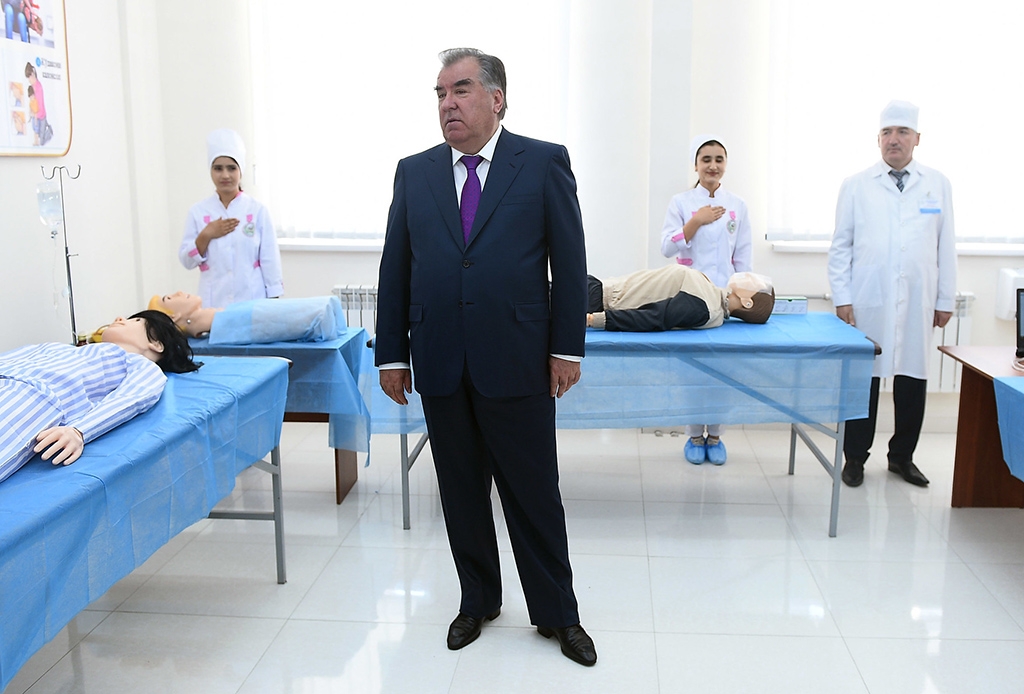 Amid desperate fresh attempts to persuade the public that COVID-19 has not arrived in the country, officials in Tajikistan have attributed a death this weekend to an older suspect: H1N1, or swine flu.

Jaloliddin Abdujabborzoda, the head of the department of internal affairs at the Dushanbe prosecutor’s office, sought treatment in the middle of April complaining of pain in his lungs. He died on April 19.

The Health Ministry said Abdujabborzoda was admitted to an infectious diseases hospital on April 15. One day later, his health worsened and he was transferred to another facility, where he was diagnosed with pneumonia and influenza. In a statement released after his death, the ministry cited H1N1 as the cause of death, and appeared to explicitly rule out COVID-19 as a cause.

“It should be noted that … Jaloliddin Abdujabborzoda was tested for the coronavirus and the result was negative,” the ministry said in its statement.

Abdujabborzoda’s relatives had previously been cited in media reports as saying his body was brought to them by medical personnel in special protective equipment. The same health workers also performed the burial at the funeral, according to a report from RFE/RL’s Tajik service, Radio Ozodi.

Abdujabborzoda’s father, Saidislom, has also reportedly been hospitalized. Another person contacted by Ozodi, the wife of a patient who shared a room with Abdujabborzoda, said her husband was hospitalized after complaining of shortness of breath and a persistent cough.

Multiple deaths in recent weeks have been attributed to pneumonia and the government says it has run thousands of tests to back its claims that there have been no confirmed coronavirus cases to day.

The Health Ministry said on April 16 that local laboratories have conducted 2,317 tests – 440 of them were repeat tests – and that they all turned out negative.

Officials point to their quick reaction to the global coronavirus emergency as a deciding factor in keeping coronavirus at bay. Travel to and from China was suspended in early January. The civilian aviation body on March 19 ruled that all international air traffic would be suspended immediately as another protective measure.

Authorities has also been placing arriving travelers considered to pose a potential infection risk in quarantine since January. Between February 1 and April 20, more than 8,200 people have been placed under medical observation. More than 7,100 have since been released from quarantine.

Prague-based news website Akhbor, however, has cited an unnamed resident of Abdujabborzoda’s neighborhood in Dushanbe to report that he had recently returned from a trip abroad – from either the United States or Germany – but that he was able to bypass the requirement to be placed in quarantine.

Deputy Health Minister Jamshed Shohidon has explained the apparent spike of pneumonia cases to adverse weather conditions, which he said had caused a spike in respiratory conditions in particular.

Seemingly confident that the preventative measures have been successful, the government has pursued few of the lockdown measures or social distancing guidelines in place across many other parts of the world.

Children are going to school and the public piled into crowded transportation.

In neighboring Kyrgyzstan, authorities have suspended the draft for obligatory military service this spring, but not Tajikistan.

On the contrary, some regions have boasted that they have reached their recruitments targets. In some places, military commissariats have been engaged in the now traditional process of press-ganging recruits. Video footage that surfaced on Facebook on April 17 showed plainclothes men grabbing a man off the street and shoving him into a waiting car for transportation to the nearest enrollment office.