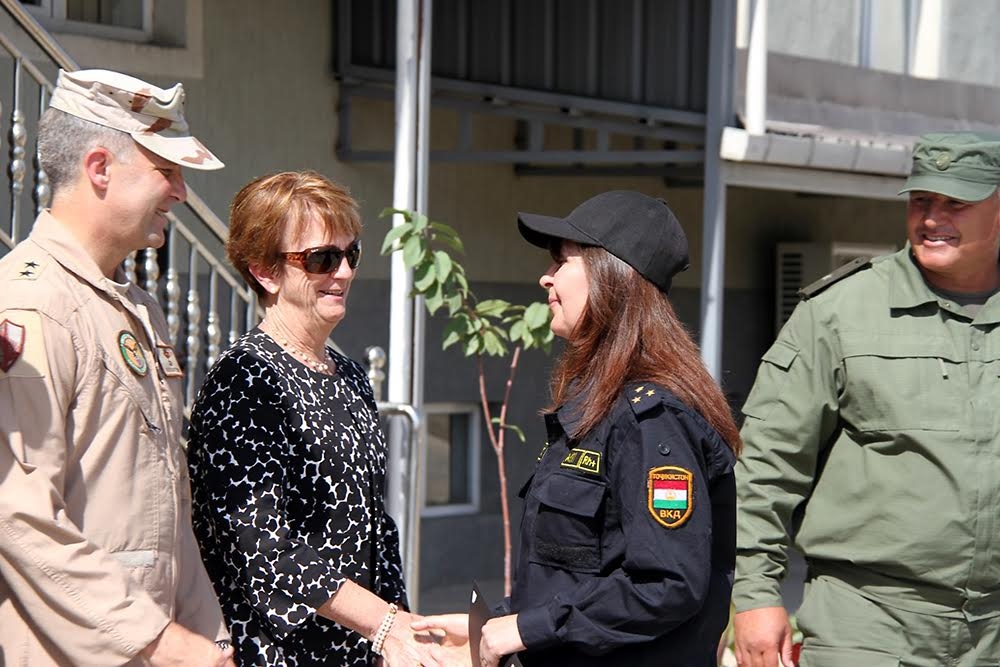 Tajikistan’s use of US military aid under scrutiny in Washington. (Photo: US State Department)

One afternoon in late August, members of Tajikistan’s last real opposition party turned up at the Sheraton Dushanbe Hotel for a news conference, intending to discuss the latest wave of government intimidation they were facing.

Security guards prevented the Islamic Renaissance Party (IRPT) representatives from getting past the main gate. They claimed that because of a power outage the hotel could not host a big event, even though lights could be seen blazing from outside the building. The Sheraton’s guests at the time included members of a visiting delegation headed by Gen. Lloyd Austin, commander of US Central Command, who was in Tajikistan to meet with President Emomali Rahmon and others.

The episode underscores how the United States tends to prioritize security cooperation in Tajikistan over support for democratic freedoms and human rights. Tajikistan’s security service and Interior Ministry forces have been receiving generous support in recent years from Washington. Meanwhile, political pluralism in Tajikistan has experienced a drastic decline in recent months.

Seizing on an opportunity presented by a purported uprising led by a renegade deputy defense minister, authorities mounted a campaign to eliminate the only remaining opponents to Rahmon’s rule. In mid-September, 13 members of the IRPT’s political council were arrested on charges of involvement in the alleged rebellion.

The United States was muted in its response to the winding down of the IRPT. The US Embassy in Dushanbe offered an emailed statement to EurasiaNet.org that called on Tajikistan “to resolve the cases of the IRPT members in a fair, transparent, and prompt manner.”

Also, although many questions remain unanswered about the alleged uprising of early September — which some analysts have suggested was a government-engineered plot to eliminate potential internal competition — the embassy continues to describe the episode as a “failed rebellion,” thereby tacitly endorsing the government’s narrative that has some holes.

US diplomats in Central Asia’s most despotic countries have typically argued that when it comes to promoting democratization, it is more useful to pursue quiet diplomacy and avoid embarrassing host governments with public criticism. But observers with deep knowledge of the situation say that the “quiet” approach has generally yielded only marginal and one-off breakthroughs.

“The problem with private interventions is that, without consequences, they mean little. Tajik officials can just tune out the talking points and wait for the conversation to move on,” said one Westerner with experience in Tajikistan, who spoke on condition of anonymity.

A report issued this past April by the State Department's Office of the Inspector General (OIG) indicated that the Pentagon has undue influence over US policy toward Tajikistan.

The report focused on a 2012 operation in Khorog carried out by Tajik security forces, which were accused of indiscriminately using force that left 20 civilians dead. The Tajik special forces had received extensive training from US advisers.

More than half of the Dushanbe embassy’s 2014 funding of approximately $84 million came from the US Department of Defense, the OIG audit read.

“Tight front office control of information reported to Washington has undermined confidence that the embassy provides a full and reliable picture of local developments essential for assessment of Arms Export Control Act concerns,” the report noted in the key findings.

US officials tend to deflect criticism over security assistance to governments with proven records of human rights violations, like that of Tajikistan, by insisting that all beneficiaries of such US programs are subject to what is known as Leahy vetting. The procedure is named for US Senator Patrick Leahy, a Democrat from Vermont who sponsored the relevant legislation.

That vetting process has proven a poor judge of character, however, as in the case of Col. Gulmurod Khalimov, a senior Tajikistan police official who defected to the Islamic State group earlier this year.

Pressed by reporters over the Khalimov case in September, outgoing US Ambassador to Tajikistan Susan M. Elliott responded that the “motivation for why Khalimov decided to go fight for [Islamic State] is unclear.” The explanation offered by Khalimov in a promotional Islamic State video was that he was protesting growing restrictions on religious freedom in Tajikistan.

In September, the US embassy handed over 60 items of tactical equipment worth $260,000 to Tajikistan’s Interior Ministry. The embassy said in a statement that the equipment was intended for counter-narcotics and border security and was the latest addition to the $130 million in assistance provided to Tajikistan’s law enforcement authorities in the last decade.

Less high-profile security assistance to Tajikistan has come in the form of special forces trainers, who regularly rotate in and out of the country.

In a statement on September 29, Freedom House Executive Vice President Daniel Calingaert noted that US security assistance is vulnerable to misuse. “Many of the recipients of that assistance are those that will now be hunting down the IRPT,” he said.