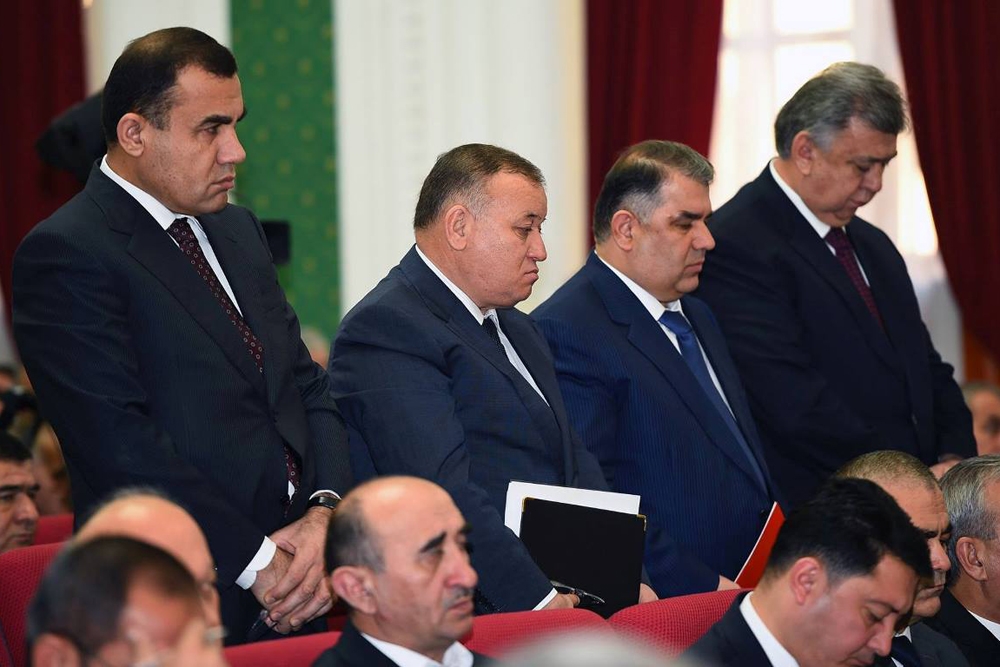 Jamshed Ziyoyev (second from left), the majority owner and chairman of Tojprombank, stands beside the heads of Fononbank, Agroinvestbank and Tojiksodirotbank during a Tajik government meeting in 2016 dedicated to a possible government bailout of the four distressed lenders. Tojprombank collapsed in 2017. (Photo: Tajik Presidential Press Service)

Police in Tajikistan announced in early October, via a run-of-the-mill press release, that they had detained a delinquent debtor owing money to the recently liquidated mid-sized lender Tojprombank.

According to the statement, the detainee had taken out a two-year loan for 120,000 somoni ($13,700) that was due for repayment at the start of 2017. The arrest came on the heels of orders issued by Deputy Prime Minister Davlatali Said to the General Prosecutor’s Office to hunt down people still owing money to Tojprombank, which had its license pulled by the Central Bank in February as it was teetering on the brink of collapse.

But as EurasiaNet.org has found, while authorities look intent on punishing Tojprombank’s smaller debtors, larger delinquent loan-holders, many of them linked to the bank itself, are facing no such pressure.

When Tojprombank’s license was withdrawn, accountholders were compensated with just 17,500 somoni ($2,000) apiece, as required by law. Officials pledged that the remainder of customers’ savings would be returned as liquidators went through the process of selling off the bank’s assets. Going after outstanding debts was another integral part of the effort to return account holders’ money.

Following the license withdrawal, the majority owner and chairman of the bank, Jamshed Ziyoyev, was removed and replaced by a committee overseeing the liquidation process. EurasiaNet.org was not able to establish Ziyoyev’s current whereabouts.

The Asia-Plus news website has reported that Tojprombank currently owns an estimated 450 million somoni in assets ($51 million) and has 2,070 outstanding debtors owing a total of 266 million somoni ($30 million). The bank in turn has to pay out 550 million somoni ($62.5 million) to around 600 private customers and 235 companies.

Two service companies registered in Tojprombank’s name, Dahbed D and Dahbed M, collectively took out loans for 20.7 million somoni ($2.3 million). That debt remains unpaid. It is not clear from open-source information what precise line of services either company provided.

Construction company Promstroy, which owes Tojprombank 3.4 million somoni ($386,000), belongs to another property development vehicle, Tropikan Invest, which is in turn owned by the bank.

All available evidence points to the likelihood that Tojprombank served, in essence, to provide liquidity for a diversified portfolio of commercial interests owned by the bank itself.

Other major delinquent debtors not obviously linked to Tojprombank have also escaped scrutiny.

Another aviation company, based in Hamburg, Germany, received a 15 million somoni ($1.7 million) loan from Tojprombank that remains unpaid. Information on the identity of the ultimate beneficiaries of that company were not immediately available.

Documents obtained by EurasiaNet.org also indicate that among the other debtors is Olim Textile, owned by Jamshed Abdulov, whose businesses are concentrated in Tajikistan’s cotton sector, much of which is reputedly controlled by President Emomali Rahmon’s brother-in-law, Hasan Asadullozoda. Abdulov owes 29 million somoni ($3.2 million). And an aviation services company Jahon Sayir, which is run by an individual called Behruz Hasan, took out a loan for 21 million somoni ($2.3 million).

Tojprombank was founded in October 1995 as an all-purpose retail bank. The controlling shares of the company were held by Jamshed Ziyoyev. Signs the lender was in distress began to emerge in 2015. In the middle of 2016, Ziyoyev was removed as head of the bank, which was placed under administration. In December, the National Bank declared it was refinancing Tojprombank to the tune of 450 million somoni ($56 million) and reappointed Ziyoyev to his old job and ordered him to restore the lender to health. The bailout money was raised through the emission of somoni-denominated sovereign bonds that were converted into liquid cash by the National Bank.

But then two months later, the National Bank performed yet another about-face and decided to shutter Tojprombank, together with another recipient of bailout funds, Fononbank.

And then in April, it emerged that the government decided unilaterally to allocate the money it had set aside as bailout funds for Tojprombank, and ultimately its customers, to construction work on the Roghun hydropower dam.

The collapse of Tojprombank caused substantial distress for small-scale depositors.

Solidjon Djurayev, a well-known local lawyer who said he had deposited $45,000 with the bank in 2013, appealed in an open letter in June to the government to take legal action against Ziyoyev and other senior managers at Tojprombank. In the letter, Djurayev accused Ziyoyev of shady accounting practices and parlaying the bank’s financial resources into unprofitable enterprises. The lawyer said Tojprombank’s management was purposely attempting to avoid paying back depositors by valuing the bank’s remaining assets at exorbitantly high prices designed to discourage buyers. Tojprombank assets include, among other things, its headquarters in Dushanbe, all its branch offices, and numerous houses and apartments. Djurayev has, since writing his letter, moved to Russia.

At the start of August, a 50-year-old resident of Dushanbe, Hairiddin Kodirov, hanged himself and left a suicide note blaming Tojprombank for his misfortunes. Two years earlier, Kodirov, a railway worker, had deposited $84,000, the proceeds from the sale of his late parents’ home, with the bank. Almost all the money was lost.