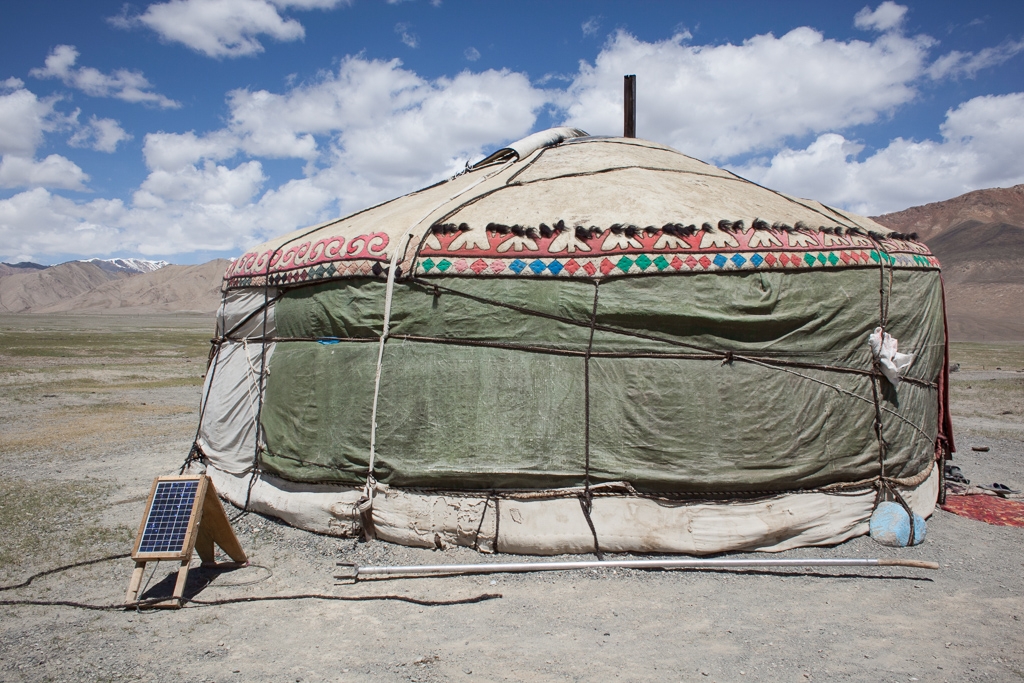 The power lines strung above the dusty lanes of Alichur are nothing more than a painful reminder of simpler times. In the 18 years since the Soviet Union collapsed, the town has not seen one watt of state-supplied electricity.

Tajikistan's notoriously weak and unreliable energy grid barely maintains a tenuous connection to the vast and sparsely-populated Murgab District of Badakhshan Province, situated on the high plateaus between Afghanistan and China. In the district center, Murgab, incandescent bulbs flicker like dying embers only a few hours per day, rarely providing enough wattage to make reading at night feasible, let alone to power an appliance. And that is in the summer months, when hydropower from rivers swollen with melting snow is supposed to be plentiful.

But now, some Badakhshan residents are declaring their energy independence from Dushanbe, embracing solar power, and finding, in the process, that they are saving money, and easing the stress on the local ecosystem. Using inexpensive Chinese equipment brought from just across the border, many save over a dollar per day by relying on the sun, rather than kerosene, as a power source. The savings constitutes a small fortune for the average Tajik. Per capita GDP in Tajikistan is estimated at $1,800 annually, making it one of the poorest countries in the world. Roughly 60 percent of Tajiks live below the poverty line, according to CIA estimates.

The photovoltaic panels "are economical. You buy them once and you don't have to buy kerosene anymore," says Atabay, an ethnic-Kyrgyz yak herder, gesturing to the sympathetic sun outside his felt yurt. Previously, he used 20 liters of kerosene per month. Now, in addition to clean light, he listens to music and spends his savings on diesel for a generator so he can watch satellite television.

Many families in the area have already purchased a solar set-up, says Marifat, one of two merchants who sell the equipment in Murgab's ramshackle bazaar. After five years, business has tapered off: "Now, I only sell three or four a month. Last year I used to sell 10 to 15 pieces in a good month."

"We are selling less, because all the people in Murgab bought them already." The average price for a 12-volt unit is 1000 somoni (about $230). It is a large outlay, but one most people realize will save them in the long run. "The price includes the panel, battery, three light bulbs and an inverter," she adds.

Ainagul, another Kyrgyz herder who also spends the short summer season based in the 'jailoos' -- summer pastures north of Alichur -- says that before purchasing her solar setup, her family used one liter of kerosene every day to provide light "because we have small children and we had to have light at night." At five somoni a liter, that totaled over $400 per year. She spent 700 somoni ($160) on her six-volt solar unit.

"We've had it for two years," says Ainagul, setting a bowl of yak butter before a visiting reporter. "It provides three or four hours of light and music from the tape recorder" per night. "It helps the children study," she adds.

These days, as summer rapidly gives way to fall, herders like Ainagul are returning to their mud-brick houses in Alichur, packing up their portable solar setup, rolling up the yurt and mattresses and heading for town. "We use it all year, but it works better in summer. In the winter, there is not as much sun."

Perhaps 70 percent of the yurts on the Alichur plain have either a solar panel or share one with neighbors, revealing the tight-knit bonds amongst the extended nomadic families.

Of course, in a country as impoverished as Tajikistan, not everyone can afford the investment, despite the long-term savings. To assist the hardest-pressed Tajiks, the Mountain Societies Development Support Programme (MSDSP), a project operated by the Aga Khan Foundation, distributes panels to qualifying recipients, says Baktiyar Azizmamadov, the MSDSP regional manager in Khorog.

Solar, he notes, is a green alternative in more than one way.

In the high-altitude pastureland around Murgab and Alichur, with short summers, little rain and long, harsh winters, shrubs grow slowly. The Soviet state once provided coal for heat and cooking and feed for the animals. Now, coal imported from neighboring Kyrgyzstan is prohibitively expensive at 800 somoni per ton (about $180); each home needs between three and five tons per winter. Without alternatives, locals must pick the plants for fuel and animal feed. The shrubs are getting harder to find and herders complain they now have to hire trucks and drive up to 80 kilometers to collect them.

"There are almost no plants; they've all been dug up," says Azizmamadov. The depletion of supplies could lead to permanent ecological damage and conflicts over grazing rights, observers warn.

"The solar alternative releases pressure" on the local environment, he adds. "We hope this will reduce the amount of shrubs used" since the money saved can go towards cooking fuels. With solar electricity, locals can burn fewer shrubs while also moderating their need to purchase such expensive fuels as diesel and kerosene.

Nevertheless, the solar power is too weak to heat homes or supplant cooking fuels such as dung - helpful for soil regeneration - plants and coal. The plundering of the fauna continues, prompting one elder to grieve: "No grass remains. There is no food for the yaks."