Rights groups say Gadoyev was beaten and coerced into claiming he had returned of his own will. 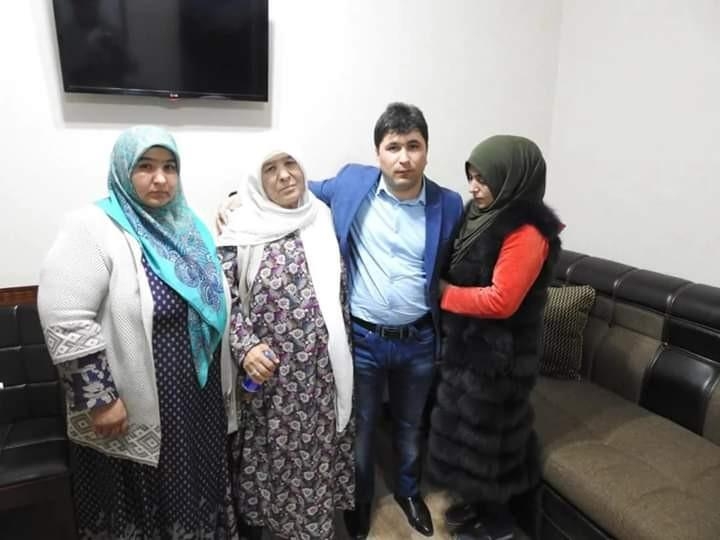 Gadoyev posing for a photo with his family after his return to Tajikistan. (Photo: Tajikistan Interior Ministry)

A coalition of international rights groups has claimed that the Russian security services connived with Tajikistan to abduct a Tajik opposition activist in Moscow and forcibly return him to his home country.

The advocacy organizations said in their February 24 statement that Sharofiddin Gadoyev, 33, who enjoys asylum status in the Netherlands, was beaten and later coerced into claiming before camera that he had traveled to Tajikistan of his own will.

The Association of Central Asian Migrants, Association for Human Rights in Central Asia, Human Rights Watch (HRW) and the Norwegian Helsinki Committee said the governments of Tajikistan and Russia have through this episode “shamelessly flouted their international obligations.”

Gadoyev “was arbitrarily detained in Russia, beaten, and spirited away to Tajikistan, where he faces trumped-up charges for his peaceful exercise of freedom of expression,” said HRW Central Asia researcher Steve Swerdlow.

An investigation by the rights groups has shed more light on a story that has at several junctures defied sense.

Gadoyev suddenly resurfaced without warning in Dushanbe, the Tajik capital, on February 15. In an address to camera uploaded to the internet that same day, Gadoyev claimed he had returned willingly and then went on to bitterly criticize a fellow opposition figure based abroad.

In the days that followed, more videos and photos surfaced on the internet, all posted with the apparent attempt to demonstrate that Gadoyev was not under duress and that he was able to meet freely with family and friends.

Convincing evidence suggested, however, that this account was not credible. One news website obtained and published an Amsterdam-Moscow return air ticket for Gadoyev, indicating that the activist had intended to return to his base in the Netherlands. Later, a video surfaced of Gadoyev stating to camera that he feared that he might be abducted.

“If you see this video, it means I have been murdered, kidnapped or that I have gone missing,” Gadoyev says in the video, filmed before his departure to Moscow.

Gadoyev states in the video that he was set to travel to Moscow to meet a representative of Russia’s Security Council, a consultative body that answers to the president.

“I have previously had contact with security officials in Russia. To discuss the situation in Tajikistan and the issue of labor migrants,” Gadoyev said.

This aspect of the account was borne out by rights groups, which said that Gadoyev flew to Moscow on February 13 and met the following day with Russian security services officials who were to drive him from his hotel to an appointment.

But unnamed sources told the rights groups that during the drive Gadoyev’s car was stopped by another car, also occupied by Russian security services. He was bundled into the second car and then driven to Moscow’s Domodedovo airport and placed on a Somon Air flight to Dushanbe.

The Russian security service officers were allegedly able to sweep past passport control, which suggests they may have been affiliated with the Federal Security Services, the agency with oversight over border enforcement.

“On the flight, [Gadoyev] was accompanied by officers from Tajikistan security services, who beat him and placed a sack over his head,” the rights group said in their account, which was based in part on the testimonies of Gadoyev’s relatives and colleagues.

The series of seemingly choreographed video testimonies — including one that involved a correspondent for Russian state-owned news agency RIA-Novosti, Lidia Isamova — began in the hours after Gadoyev’s arrival in Dushanbe.

The Dutch Foreign Ministry say they have learned that Gadoyev has been placed under arrest and is being charged with criminal activities. The Tajik Interior Ministry has previously said he is wanted on suspicion of possessing contraband and forging documents.

Before taking up political activism, Gadoyev was, along with a man called Umarali Quvvatov, a founder of two companies, Faroz and Tojiron, which were later, in 2012, acquired through extensive arm-twisting by Shamsullo Sohibov, a son-in-law of the president.

Following their run-in with Sohibov, Gadoyev and Quvvatov fled the country and then founded an opposition movement, Group 24, which pooled the energies of entrepreneurs somehow or other harassed by the extended family of President Emomali Rahmon.

In March 2015, Quvvatov was gunned down in Istanbul — a murder that many people close to him blamed on the Tajik government. In the immediate wake of that killing, Turkish news outlets identified the main suspect as Sulaimon Kayumov and described him as an associate of Sohibov. Although Kayumov would later be sentenced to life in jail by an Istanbul court, it is not known that the Sohibov link was ever investigated.

Gadoyev subsequently went on to set up his own political movement — Reform and Development of Tajikistan. This group in turn pledged its solidarity with the National Alliance of Tajikistan, an umbrella group that brought together multiple exile organizations opposed to President Rahmon’s rule.