Tajikistan Spending $100m on a Theater, but Where Are the Theatergoers? 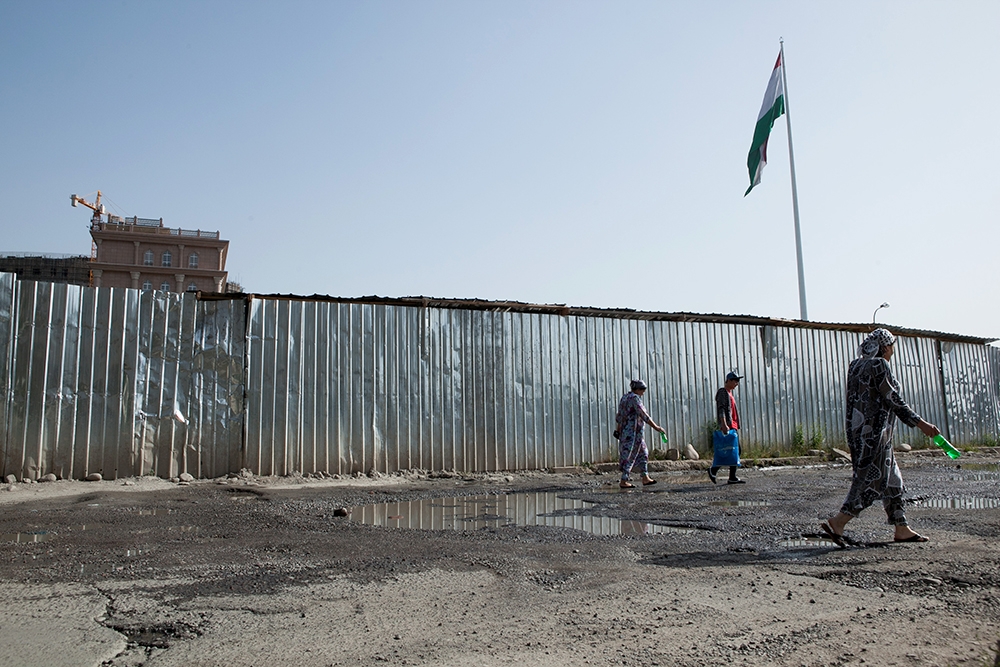 Once the world’s tallest flagpole, this prestige project – that officials say was designed to please the president – was recently surpassed by one erected in Saudi Arabia. (Photo: David Trilling)

Tajikistan is a donor-dependent state, but that does not stop President Emomali Rahmon’s administration from undertaking extravagant building projects. The latest case of grandiosity involves the construction of what the president’s website boasts will be Central Asia’s largest theater.

The tab for the theater project is expected to run $100 million. Once completed, it will expand an already lengthy list of outsized projects that are apparently intended to burnish the reputation of the former Soviet Union’s poorest country. Earlier projects include what was briefly the world’s tallest flagpole, completed in 2011. Tajikistan also claims to have Central Asia’s largest library (completed in 2012), biggest museum (2013) and most capacious teahouse (2014).

President Rahmon laid the theater’s cornerstone on March 17. His office promises the building will be the most beautiful in Central Asia and include three large concert halls. The largest is projected to have a seating capacity of 2,500 and possess “necessary world-class features.” The five-story building will abut other prestige projects surrounding the flagpole, which last September was struck off the Guinness Book of World Records by a taller pole in Saudi Arabia.

Some local observers wonder if the theater project is a wise use of limited funds. Tajikistan regularly struggles to balance its budget and depends on foreign aid to fund many basic social services. From 2010-13, the World Bank gave Dushanbe $55.4 million in budget support as a grant, and is considering another $20 million grant this year. The Asian Development Bank has earmarked $20 million this year as budget support, and another $59 million to “support development of the private sector, railways and water resources, and to help strengthen the investment climate,” the ADB said in January. Other donors also contribute annually, with the US State Department’s aid arm budgeting $30 million for Tajikistan this year.

Moreover, Tajikistan has no existing shortage of theaters. At the same time, there does not appear to be an abundance of theatergoers.

A cashier at Dushanbe’s Abulkosim Lohuti Academic Theater says the 500-seat hall is often only 10-percent full. When school groups come, it is sometimes half full. It is a similar story at the 300-seat Mayakovski Russian Drama Theater and four other theaters in the capital.

Theater lovers say that the end of state subsidies with the fall of the Soviet Union left drama troupes and art schools underfunded. “I went to the theater in Kharkiv, Ukraine, to see a play about a relationship in a family. I could see all the pain and suffering [in the actors]. All this touched me. I cannot feel the same in our theaters. There are people on the stage, doing something and talking, but they do not touch us,” Dushanbe housewife Zainura Obidova, 25, told EurasiaNet.org.

Amal Khanum Gadjieva of the Bactria Cultural Center in Dushanbe says that the low quality of contemporary productions has left the post-Soviet generation uninterested in theater. She adds that if the government wishes to support the arts, it does not need to build a new theater. “I go to the opera and ballet quite often, and there are usually more people on stage than in the hall. I always have tears in my eyes [because] I feel sorry for the actors,” Gadjieva said.

She cites the case of celebrated stage director Barzu Abdurazakov, who left Tajikistan in 2014 for Kyrgyzstan, citing a lack of interest in his work among the public and authorities alike. “He wins new prizes and awards with his plays. Unfortunately they don’t honor Tajikistan, but Kyrgyzstan and Kazakhstan,” Gadjieva told EurasiaNet.org.

“How will they fill this new theater?” continued Gadjieva. “Probably they will force a regiment of soldiers to attend, or students and schoolchildren. But this is not the kind of spectators the actors work for. … And those who are brought to the theater by force gnaw on sunflower seeds or talk on their mobile phones, disturbing the other theatergoers,” she complained.

Authorities are not eager to discuss construction costs for the new theater. Such reticence is understandable in a city where many residents assume that officials use construction projects to siphon state funds. An official from the city construction agency declined to comment, as did a senior official at the Culture Ministry, though he did confirm the money is coming out of the state budget.

But Saodat Ibragimova of the Finance Ministry’s Investment Department told EurasiaNet.org that the project is slated to cost about 600 million somoni (roughly $100 million).

That number horrifies Gadjieva, the commentator from the Bactria Cultural Center.

“There are malnourished children [in Tajikistan], pensioners are having their pensions cut, our disabled people are being rechecked for their disabilities, and at the same time a lot of money is spent on a theater. Why?” Gadjieva said, calling the project a “feast during a plague.”

Authorities insist it is a worthy expense. Khabib Sulaimoni of the Culture Ministry’s Arts Department says every country has a national theater. Therefore, Tajikistan needs one too.

“There will be national plays and performances staged [at the new theater]. Nowadays, spectators want to see current problems and social pain reflected on the stage,” Sulaimoni told EurasiaNet.org. He added that 67 potential staffers are currently studying abroad to develop Tajik theater when they return.