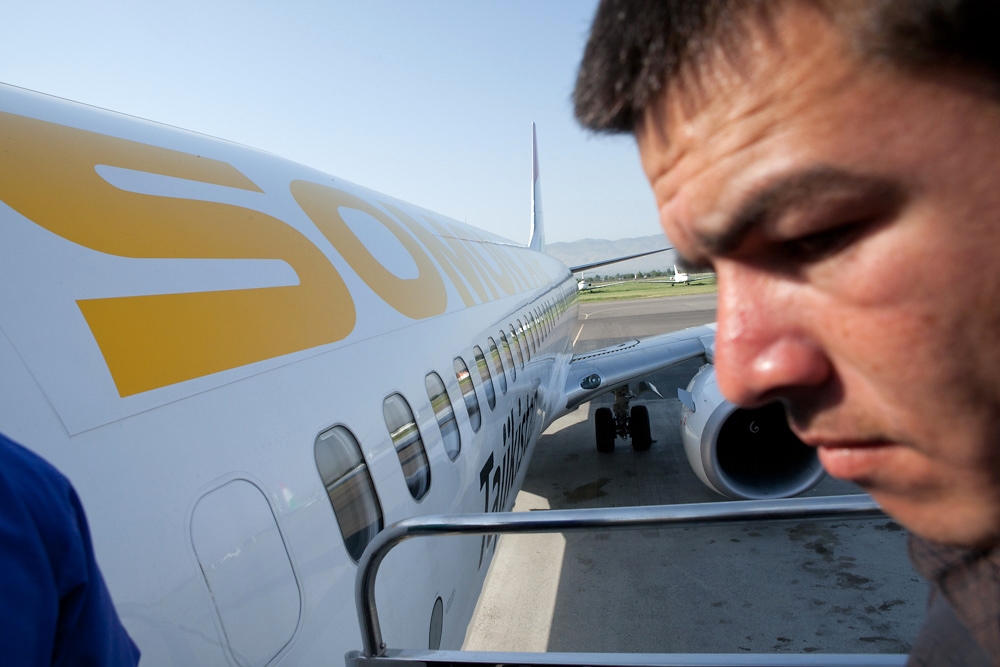 Tajik men board a flight from Dushanbe to Russia in June 2013. Many of the Tajik militant jihadis fighting in Syria either fly through Russia on their way to the conflict or are recruited while they are migrant workers in Moscow, from where they eventually travel to Turkey before crossing the border into Syria. (Photo: David Trilling)

Before he became a jihadist, Odiljon Pulatov would travel each year from Tajikistan to Moscow to earn money as a construction worker.

“The money I made was enough to sustain my family. But the last time I went there, I met different people, Tajiks and other [Central Asians]. They persuaded me that jihad is a must for every Muslim,” Pulatov told EurasiaNet.org.

Pulatov, a father of four, traveled from Russia to Syria, via Turkey. Once there, over the course of two weeks, Uzbek speakers like himself indoctrinated him, emphasizing the importance of jihad. “Jihad is conducted for an idea, so that you can be closer to Allah,” explained Pulatov, 29.

Pulatov found conditions in Syria harsh, though, and in July he accepted a Tajik government amnesty, returned home and confessed. Now he is back in Spitamen District in northern Tajikistan, building a home for his family. Authorities made Pulatov accessible to various media outlets, including EurasiaNet.org, in an apparent effort to highlight the amnesty.

Madjid Aliev, a police investigator in Spitamen, says Pulatov remains under investigation. “But we are sure he won’t have any issues. That’s why he has not been detained,” Aliev said.

According to the Interior Ministry, almost 200 Tajiks are fighting in Syria. Aliev, the investigator, said officials were negotiating with others who are in Syria, offering a safety guarantee as an enticement for them to return home.

Along with the amnesty, parliament this summer toughened penalties for Tajik citizens who participate in armed conflicts abroad. But, critics say, such punishment is not a deterrent and the government’s response to the rising threat of homegrown jihadis is ineffective. “I don’t think that this law on punishing participants will resolve the problem and stop Tajiks from participating. There’s a need to take preventive measures, so that we’re not fighting the consequences, but the reasons [men travel to Syria to fight],” said Dushanbe-based religious affairs expert Faridun Hodizoda.

A lack of work is one of those reasons, contends Hodizoda. Unemployment in Tajikistan is so high that over a million Tajiks work abroad: most, like Pulatov, find work in Russia. That number constitutes approximately half of Tajikistan’s working-age males. In Russia, labor migrants are widely distrusted and subjected to various forms of harassment, including frequent police shakedowns. The difficulties prompt some to turn to Islam for solace.

At home, Tajikistan’s notoriously corrupt government does little to create jobs. And when it comes to religious affairs, officials tend to crack down on moderate expressions of Islam, harassing members of the Islamic opposition and banning children from attending mosques.

Tajiks in Russia – who are often young men with rudimentary educations and few prospects – are an important source of recruits for Jihadist causes. “Being a gastarbeiter [migrant laborer] is not an easy thing, there's a lot of humiliation. But recruiters speak to the gastarbeiters kindly. They provide moral support,” Hodizoda explained, adding that money is also a temptation. “When our citizens are told what they will be doing there [in Syria] and that they will be paid $3,000 and treated well, of course they agree. In Russia, they earn $500-600 a month.”

Tajik officials frequently assert that young Tajik men who go to Syria are, in effect, mercenaries, driven to fight by the allure of a substantial payday. But Pulatov says he was not promised a cent. “When we were recruited, no one said we would be paid,” he said.

Another potential fighter, who introduced himself as Abubakr, 23, communicated with EurasiaNet.org from Russia through a social network. Abubakr, who is from Kulyab, said he is working in Moscow with his father and brother, but he is also in touch with a Chechen friend he met online. “We both have a dream to go to Syria and participate in the war,” he said.

“We weren’t promised any money. How can one talk about money when our [Muslim] sisters and children are being killed there. I [communicated] with Tajiks who are there now, and they tell me sometimes they starve, sometimes there’s no place to sleep, but they are fighting infidels,” Abubakr said via Odnoklassniki – which has been blocked in Tajikistan since mid-July, by some accounts because radicals use it as a recruiting tool.

Abubakr believes that Muslims who criticize jihad do not understand their faith. “My mother is also trying to persuade me [not to fight], but there’s a lot she doesn’t understand about [jihad],” he said.

Officials try to use reason to appeal to vulnerable young men, according to the head of the Fatwa Department at the state-run Muftiate, Jamoliddin Homushev. “It is said that paradise is beneath your mother’s feet and that by insulting her no one gets to paradise. In Syria, an inter-ethnic fight is going on, like it was in the 1990s in Tajikistan. They [the Syrians] should solve their own problems without external interference,” Homushev told EurasiaNet.org.

Such explanations do not seem to convince many young Tajik Muslims, who do not feel their government listens to their concerns. Others feel the authorities exaggerate the extent of radicalism in the country in order to target the opposition Islamic Renaissance Party (IRPT).

Embattled IRPT leader Muhiddin Kabiri told EurasiaNet.org that authoritarianism, the government campaign against Islam and poverty drive young men into the arms of radicals. “They do not have an opportunity to improve their lives at home,” Kabiri said, referring to young Tajiks.

“We still have time to fix the situation, reform the law so young people feel their rights, including religious, are respected. […] So they realize there is no need to take up arms,” he said. “But the government is failing to address their concerns.”