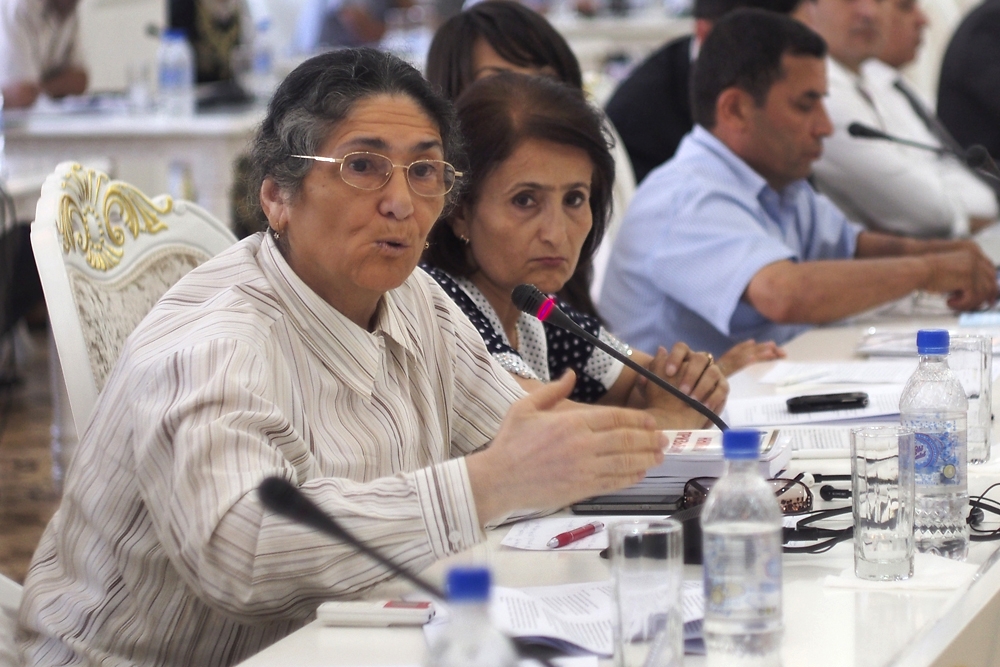 Authorities in Tajikistan have worked overtime in recent years to discredit the country’s small political opposition, and keep public attention away from politics. But the opposition coalition’s unexpected nomination of prominent human rights advocate Oynihol Bobonazarova has, if nothing else, succeeded in generating buzz during the early days of the presidential election campaign.

Bobonazarova’s nomination by the Union of Reformist Forces appears to have taken incumbent President Imomali Rahmon’s administration by surprise. Rahmon is expected to be nominated at his party’s congress on October 4. Few anticipate a fair vote in a country that has never held one to international standards, and thus few believe Bobonazarova has a chance of unseating Rahmon in the November 6 election.

“All administrative resources are in the hands of the ruling PDP [Rakhmon’s People’s Democratic Party]. Bobonazarova is a competent human rights activist; she enjoys respect in professional circles and among intellectuals. But the elections are too soon, and it is unlikely that she can gain sufficient popularity, especially in the provinces, where the electorate is not engaged in politics,” Tajik political expert Parviz Mullojanov told EurasiaNet.org.

Despite the seemingly Quixotic nature of the candidacy, Bobonazarova’s appearance in the political spotlight has set off an unexpected flurry of excitement in Dushanbe. In addition to generating debate about a female candidate in a strongly patriarchal society, members of the urban intelligentsia are energized by Bobonazarova’s platform: She proposes to decentralize the executive and support small- and medium-sized businesses.

Bobonazarova says she is motivated to help a society she says is split between the wealthy political class and the have-nots, to prove that the lives of individuals are more important than the state. “Politicians must observe the interests of all members of society –believers, atheists, entrepreneurs, communists, rich and poor,” she told EurasiaNet.org. “The servants of the people must be real servants, not masters with special privileges.”

A well-known human rights activist and lawyer, the 65-year-old Bobonazarova currently runs a non-governmental organization called Perspective-Plus, which advocates for the rights of prisoners, labor migrants, and women. She also once chaired the board of the Open Society Institute Assistance Foundation – Tajikistan. [Editor’s Note: the OSIAF-Tajikistan and EurasiaNet.org both operate under the auspices of the Soros Foundations Network]. In the early years of independence, Bobonazarova was convicted for being a member of an opposition party, but was later pardoned.

Some analysts believe her candidacy could help shift the political discourse in Tajikistan.
“People fear intimidation, and many are confident that the authorities will make up the [election] results. But this fear is not total. At these elections, the authorities will see that they have no real support among the electorate,” Temur Varky, the Tajik director of a television station broadcasting into the country from Russia, told EurasiaNet.org. “Bobonazarova is a strong candidate. Moreover, the authorities have no time to fabricate accusations against her. She can build consensus among two segments of the electorate – the secular and the religious.”

The nomination of an outsider is a creative way for the two main components of the opposition coalition -- Islamic Renaissance Party (IRPT) and the Social Democratic Party -- to remain politically relevant.

The IRPT in particular has experienced sustained pressure from authorities over the past year.  The party’s leader, Muhiddin Kabiri, has stated publicly Bobonazarova’s presidential run is designed to help clear up public misconceptions about the IRPT’s political agenda, namely that it is bent on turning Tajikistan into an Islamic state.

"We might lose the election, but we can use this opportunity to send out our message," Kabiri was quoted as saying by Radio Free Europe/Radio Liberty. “Some mistrust us, and have certain suspicions. Some use the party's Islamic name against us, spreading rumors that we would seek to create an Islamic state in Tajikistan if we won the election."

Authorities took steps earlier this year seemingly aimed at taking the wind out of the opposition’s sails. In May, for example, shortly after announcing his intention to create an opposition party, businessman Zaid Saidov was arrested on eight-year-old embezzlement charges dating to his time as industry minister, and for polygamy. Since then, prosecutors have piled on several rape charges. His trial is being held behind closed doors.

Saidov hadn’t even mentioned a presidential run, but observers took his arrest as a sign that authorities were not willing to tolerate political upstarts who might want to challenge Rahmon’s 21-year-old hold on power. Rahmon, widely criticized in the West for human rights violations, won the last election, in 2006, with 79.3 percent of votes in a contest marred by irregularities.

Another would-be opposition leader, Umarali Kuvatov, is fighting extradition from Dubai on what his supporters claim are politically motivated charges.

Bobonazarova insists that if she wins the election, she would become “an interim president,” empower the parliament and decentralize executive authority. In particular, she favors making a political change that would enable local communities elect their own leaders. According to the constitution, the president personally appoints administrators at all levels, including university rectors and the heads of hospitals.

Although she’s facing long odds, Bobonazarova gives the impression of a woman in it to win it. Tajikistan’s independent online media have compared her with Roza Otunbayeva, the opposition leader who came to power as an interim leader in neighboring Kyrgyzstan during the 2010 political violence there. Bobonazarova doesn’t fight the comparisons.

“The people are tired of the tough hand, of the authorities controlling everything and hampering development,” Bobonazarova said. “There have been plenty of examples lately in different countries when a little-known candidate gains the support of the electorate.”