Tajikistan: Teachers leaving for Russia and not looking back

Salaries were always horribly low but living costs have soared since the pandemic began. 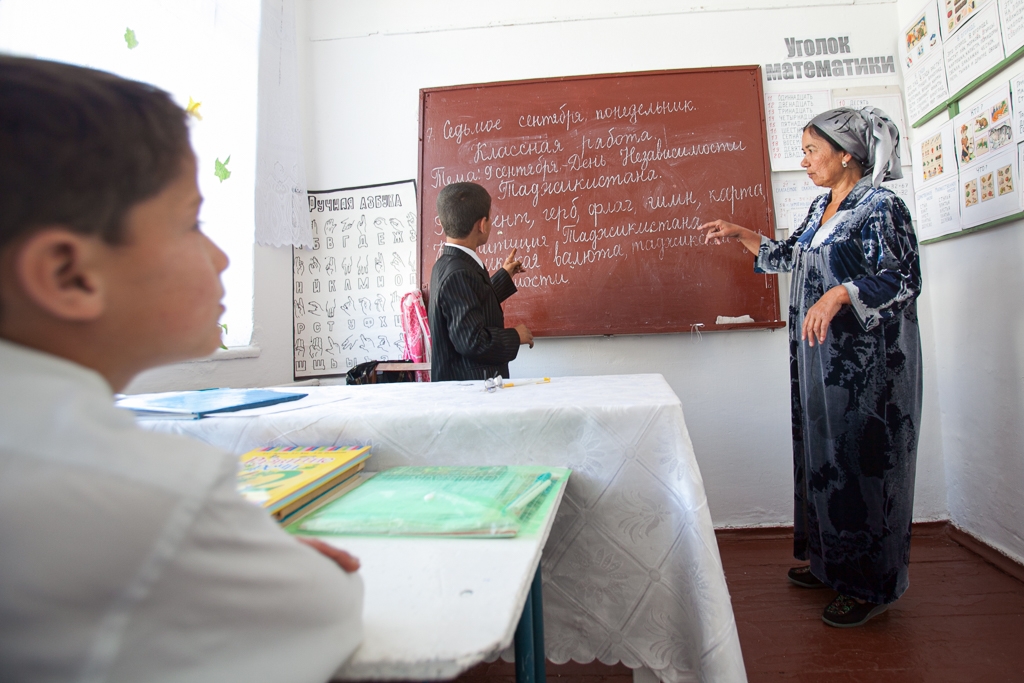 Officials admit that schools are being decimated by the teacher exodus. (David Trilling/Eurasianet file photo)

Irosfil worked for 10 years as a teacher in a town near Tajikistan’s capital, Dushanbe, before finding that his salary could no longer stretch to feed his family of six.

“I even had a credit line with the grocery store,” said Irosfil, requesting that his real name not be used and speaking via messaging app from Moscow, where he now works as a street cleaner and delivery worker.

“My father was a migrant and he never wanted me to follow in his path. But in the end, I could not wait to go to Russia. When the [school] summer holiday began, I flew out,” the 33-year-old told Eurasianet.

As a deputy school director in Vahdat, Irosfil was paid $180 per month – almost twice as much as most of his colleagues, whose salaries hover closer to the $100 mark.

His personal journey mirrors trends in one of the world’s most remittance-dependent economies, where living costs have soared over the last two years.

This year has seen a jump in the number of Tajiks arriving in Russia. According to the Interior Ministry in Moscow, 1.6 million people – a quarter of Tajikistan’s working-age population – entered Russia this year intending to work.

Tajik officials meanwhile freely admit that schools, which were already straining to deliver an acceptable education, are being decimated by the teacher exodus.

The top education official in the southern region of Khatlon, Ashurali Olimi, said in September that 750 teachers in that region had quit their jobs this year. He pinpointed their “difficult financial position” as the cause.

Deputy Education Minister Nurali Sobirzoda acknowledged later the same month that the situation was becoming critical across the country.

Irosfil estimates that he was one of seven teachers that quit his school the same month out of a total teaching staff of 56. In previous years, two or three of his colleagues would spend the summer in Russia, he said, and usually return to school in the fall.

The math that motivated his decision is well known to most citizens in Central Asia’s poorest country. Menial work in Moscow can reap up to $800 per month. Irosfil shares a two-room flat in the Russian capital with nine other Tajiks, which allows him to keep his monthly living costs to around 15,000 rubles ($210). He sends roughly the same amount home and can save any money left over for the future.

Tajikistan has seen prices for food rise precipitously since the coronavirus pandemic began.

The sudden collapse in migration remittances – typically equivalent to between a quarter and a third of GDP – after Russia shut its borders last year weakened the somoni and bolstered inflation.

Inflation has continued despite Russia reopening to migrants this spring – a decision that sparked desperate scenes as migrants gave up livestock and borrowed money to purchase air tickets sold at sky-high prices by a company tied to Tajikistan’s ruling family.

Kazakhstan’s decision to raise wheat prices by a quarter to compensate farmers for losses during the region’s long and severe drought is expected to further boost rising flour prices at markets in Tajikistan.

The government has raised teacher salaries three times in the last five years, most recently in 2020. But Munira Inoyatova, who served as education minister from 1994 to 2000, told Eurasianet that incremental pay increases were no match for rising living costs.

According to official statistics, there are over 98,000 teachers in Tajikistan with higher-education qualifications, a further 30,000 with vocational training and a further 1,800 who took up their posts immediately after leaving high school.

Inoyatova and other experts fear a rapid deterioration in standards if the trend continues.

“Teachers work not only with a stick and a blackboard. They work with humans. Experienced teachers can handle young children. But will the young cadres be able to fulfill this task without training from their more experienced colleagues?” she asked.

For Robiya, the mother of two teenage twins who attend another school in Vahdat, it is too early to answer that question.

Their Russian-language and biology teachers both quit over the summer to search for work in Russia, and the school has not yet found permanent replacements.

“We parents and our children had gotten used to these teachers,” said Robiya, who preferred to use only her first name. “I suppose they left the school because they simply couldn’t live on those salaries.”