At least three people have reportedly been killed by government forces to date. 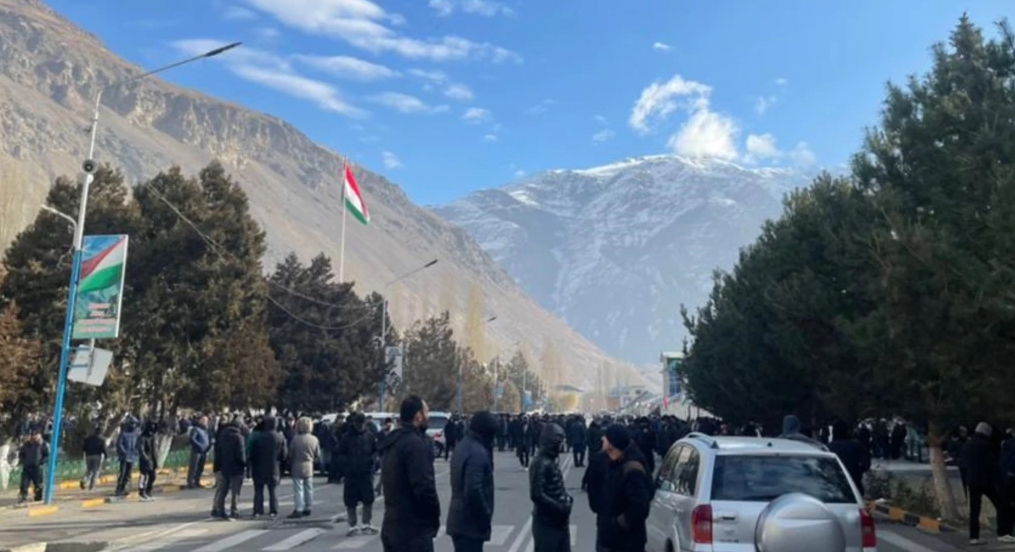 The crowd in Khorog. (Photo: Courtesy photo via RFE/RL)

Demonstrations in an eastern city in Tajikistan continued into their third day on November 27 amid mounting anger over the killing of a local resident by law enforcement officers. At least two people have reportedly been killed after an initial attempt by government forces to suppress the rally.

Several thousand people are occupying a central square in Khorog, the capital of the Gorno-Badakhshan Autonomous Region, or GBAO, in a demand for justice. The authorities have intimated they will remove the crowd with force if it is does not disperse.

The standoff has its roots in an incident in February 2020, when a group of people from the GBAO’s Roshtkala district, confronted and assaulted a deputy prosecutor they said had harassed a young woman, forcing him to issue an apology to camera. The group included a man called Gulbiddin Ziyobekov, who was subsequently named as the object of a criminal investigation.

The investigation was halted at the instigation of then-GBAO governor Yodgor Faizov, who mediated a way out of the impasse. Faizov was appointed to his position in October 2018 in a compromise gesture from the central government in Dushanbe. As a prominent figure emerging from the Aga Khan Fund for Economic Development, a charity funded by an individual revered by the people of the Pamirs, Faizov was considered somebody who would serve in the interest of the community.

Faizov was removed from the post earlier this month, however. His dismissal appears to have triggered a renewed effort to arrest Ziyobekov, 29. According to a state media account of events, Ziyobekov resisted detention and fired a gun at an arresting officer. He was then shot in return, Khovar news agency reported on November 25. Many people in Khorog dispute the government’s account.

When Ziyobekov died, a crowd of residents mounted a demonstration in front of the mayor’s office with demands that the officer responsible be punished. Ziyobekov’s mother took his body to the site of the gathering and said she would not leave until she was offered an explanation for what had happened. Ziyobekov’s was taken away for burial on the morning of November 27. At least two people – Gulnazar Murodbekov and Tutisho Amirshoev, according to RFE/RL's reporting – were killed after the first day of demonstrations, when government forces opened fire on the crowd. Several police officers have also been injured in clashes.

The authorities have given no indication they are going to cave in. The deputy Interior Ministry spoke on the local state-run television station, Badakhshon, on the evening of November 26 to warn protesters to disperse or that he would unleash riot police.

Tensions escalated anew on November 27 when Faizov’s replacement, Alisher Mirzonabot, a former officer in the security services, went to the square to plead with demonstrators. An eyewitness told Eurasianet in a telephone interview that he promised that a commission would be set up to get to the bottom of the circumstances surrounding Ziyobekov’s killing, but that the crowd was dissatisfied with his pledges and has now expanded demands to include guarantees of enhanced autonomous rule for the GBAO. Angered by Mirzonabot’s perceived intransigence, people in the crowd pelted him with stones as he began to leave the scene. His guards then responded with gunfire. Asia-Plus news agency has reported that Mirzonabot sustained a head wound and that at least two other people were injured in the clash.

Members of the Pamiri community picketed the offices of the United Nations in Dushanbe on November 27, but that rally was quickly broken up by police. Hundreds gathered outside the Tajik Embassy in Moscow on November 25.

A number of serious flareups between the central government and Pamiris have occurred over the past decade. Pamiris are ethnically and linguistically distinct from the majority Tajik population and follow the Ismaili faith, an offshoot of Shia Islam, as opposed to the Sunni Islam professed by Tajiks.

When a grueling civil conflict broke out in the early 1990s, Pamiris took the side of what would go on to become the losing side. Although the GBAO, which has a population of around 227,000 and a long border with eastern Afghanistan, enjoys some formal degree of autonomy, that status exists only on paper and Dushanbe has sought over the years to further consolidate its control over the region.

The bloodiest confrontation in recent history occurred in 2012, when government troops embarked on a mission to capture a group of informal leaders accused by the authorities of being at the head of drug- and gem-smuggling rings. In a sign of public pushback, many thousands of people emerged onto the streets in Khorog to register their discontent over perceptions that the government was seeking to further curtail their autonomy. Around 50 people are believed to have been killed in that violence.

Another flareup occurred in September 2018, when President Emomali Rahmon used a visit to Khorog to dress down top security officials over what he described as a state of lawlessness in the region. A security sweep followed in which the movements of local people were heavily constrained, generating only more resentment.