Tajikistan: The cost of Chinese debt

What is Tajikistan prepared to give China as it struggles to settle its liabilities? 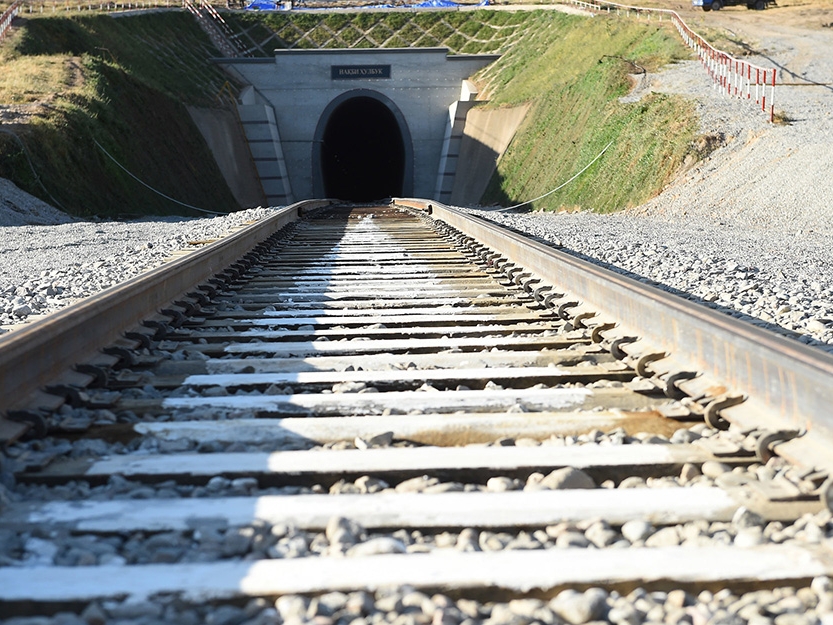 Where is all this debt leading? (Tajik president’s office)

A ubiquitous sign seen around Tajikistan’s capital speaks volumes about the country’s reliance on its eastern neighbor: “Assistance from China for a common future.”

The words are typically emblazoned on buildings and buses paid for with loans and grants issued by Beijing.

One prime example is the new premises of parliament. That that complex, which is going up where the headquarters of the Soviet-era Communist Party used to stand, is being completed with a $250 million grant.

Another $120 million in handouts have been given by China to build a new city hall.

In theory, this all comes without strings attached, but analysts are not convinced.

“This all feels very disturbing,” Tajik political scientist Parviz Mullojanov told Eurasianet. “This is a very dangerous trend, especially as there are also large debts. Amassing Chinese debt is playing with fire. At any moment now, this could serve as a pretext for political and geopolitical expansion.”

The numbers tell an eloquent story.

Of the $3.3 billion that Tajikistan owed to international creditors at the start of 2022, 60 percent – $1.98 billion – is owed to the state-run Export-Import Bank of China, better known as Eximbank. Sri Lanka’s massive liabilities before China have made international headlines in recent months, and yet, what that country owes to Beijing accounts for only 10 percent or so of its foreign debt pile.

The bulk of Tajikistan’s annual debt repayments are, unsurprisingly, earmarked for China, but the rate at which money is being paid back will be far from reassuring for the country’s bean-counters.

Of the $131.9 million repaid by Tajikistan in 2021, $65.2 million went to China in one form or another. Almost $22 million of the money paid to China was interest accrued.

In terms of interest payments, only the Eurobond issued by Tajikistan’s Finance Ministry in 2017 proved more costly last year. That bill was $35.7 million.

Chinese debt has usually been extended for the purposes of building or overhauling transport infrastructure or energy projects. Work is more often than not implemented by Chinese companies themselves.

Because Chinese debt agreements are shrouded in secrecy, working out the terms, even the size of the credit, is complicated.

To take one example, Eximbank in 2014 agreed to extend credit to complete the Vahdat-Yovon railway, a link between the center and south of the country. When the Dushanbe to Kulob route – of which that Vahdat-Yovon section constitutes one part – was inaugurated by President Emomali Rahmon in August 2016, all Tajik state media noted was that the project cost 985 million somoni ($125 million at the rate of the time) to finish. Khovar state news agency did not state where any of the money had come from or who had done the construction.

But in early 2015, first deputy Finance Minister Jamoliddin Nuraliyev told reporters that Eximbank had contributed a loan of at least $68 million at preferential rates toward completion of the Vahdat-Yovon railroad. The tender for the contract was reportedly handed to the state-owned China Railway Construction Corporation without even the semblance of an open bidding process.

Another important project mostly underwritten by Eximbank was the epic effort, which started in 2006 and ended in 2013, to overhaul the high-altitude Dushanbe-Chanak road from the capital to the northern Sughd province. The Beijing-based lender’s contribution on that occasion was an almost $290 million loan. Once again, a Chinese company – the colossal engineering company China Road and Bridge Corporation – got the contract, meaning the money was in effect quickly re-routed back into China, although the debts remained in Tajikistan.

As a China Road and Bridge Corporation executive told Chinese state media in 2019, his company has built 728 kilometers of road worth a total of $779 million in Tajikistan.

The relatively pristine Dushanbe-Chanak route is undoubtedly a boon to Tajik motorists, although many drivers grumble at the fact that they are required to pay tolls to a company registered in the British Virgin Islands. How much of those collected tolls, if any, go toward servicing foreign debts is a mystery, like so much else that has to do with Chinese debt.

Mullojanov argued that this approach was part of a well-understood strategy.

“China has a standard policy for all countries: They need to employ their own workforce, so they send their own people and industrial resources to do all the projects. China needs a market for its industry,” Mullojanov said.

Other analysts have taken a more benevolent view of Beijing’s loan agenda, however.

Marina Rudyak, a scholar at Heidelberg University’s Institute of Chinese Studies, said that her analysis of Chinese official and academic discourse shows that Beijing believes debt will in the final analysis lead to economic growth and, accordingly, less debt.

“It is, you could argue, a more need- and want-centered than a risk-centered perspective,” Rudyak wrote in emailed remarks. “For Tajikistan in particular, I think we have to consider the role China ascribes to it in particular in the Afghanistan context. It needs a stable Tajikistan and will probably pour as much money as it believes it takes to keep it stable, even with prospects of loan defaults, because the alternative of Tajikistan collapsing into a new civil war or similar is much more costly.”

In the short-term, however, the burden of the debt is forcing Tajikistan to give away the family silver – or family gold, to be more accurate.

In 2016, Xinjiang-based company TBEA put the final touches to work on a 400-megawatt power plant in Dushanbe known as TETs-2. The Tajik government only contributed $17.4 million to the $349 million project. The rest came from TBEA itself. Three years later, to pay off that debt, Tajikistan simply gave TBEA the concession to develop its Upper Kumarg and Eastern Duoba gold mines, both located in the northern Ayni district. The decision was green-lit by the rubber-stamp parliament. China-based news website Securities Times at the time cited TBEA chairman Zhang Xin as saying that if the mines did not contain sufficient gold to cover their costs, Tajikistan would grant a development license to yet another deposit.

Warming to this approach, parliament later that same year voted to exempt another Chinese company, Kashgar Xinyu Dadi Mining Investment, from all types of taxes and customs duties for a period of seven years. The miner was also granted development rights over a silver deposit in the high-altitude Pamir region.

It is not known for certain what Kashgar Xinyu Dadi Mining Investment did to earn such generous treatment, but the whispered speculation is that it was in return for the Chinese government underwriting the parliament and Dushanbe city hall projects.

The question that arises perennially is how much Tajikistan will be prepared to give away as it continues struggling to settle all its liabilities.

Tajik officials at the time insisted this development had marked a major victory for them as China had as part of a territorial dispute dating back to the Soviet era demanded around 5.5 percent of land that Tajikistan has claimed as its own.

Curiously, though, Tajikistan has shrunken even further since 2011. Poring through State Statistics Agency data, local news outlet Your.tj found that Tajikistan only covered 141,400 square kilometers, implying that another 600 square kilometers of territory – a chunk of land not much smaller than Singapore – had gone missing. It is unclear where this land went, but precedent suggests China might be a strong candidate.