Testimonials from relatives of the dead suggest the government has a lot to hide. 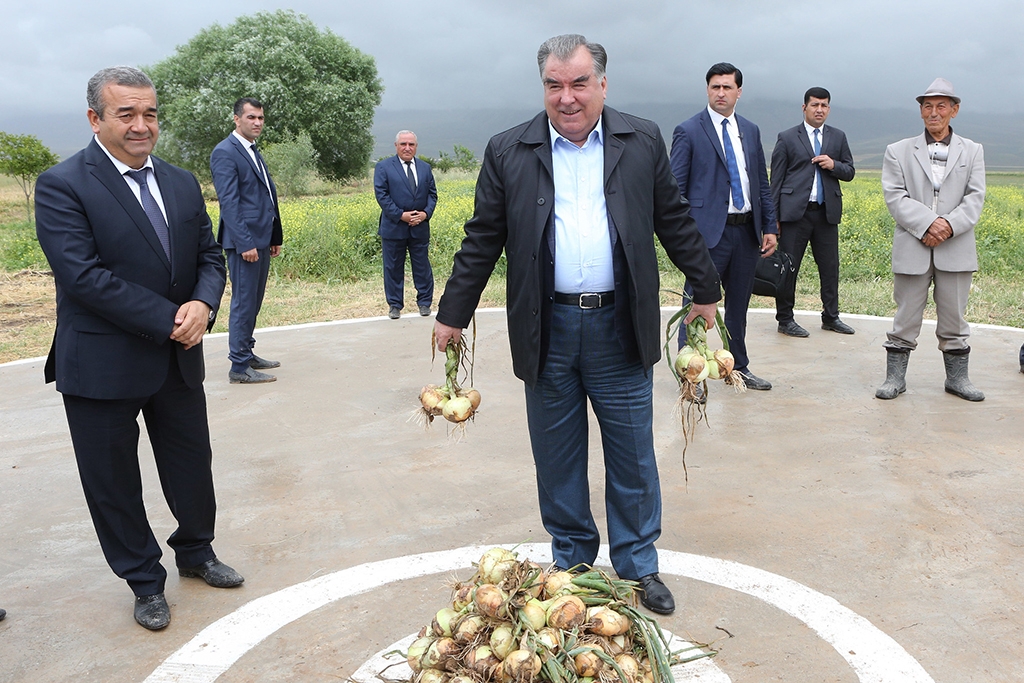 About 10 days after the start of Ramadan, the holy Islamic month of fasting, Sokina’s son called from prison to ask for a food parcel.

"Mom, please bring me something to eat. We are fasting at the moment and I am not getting enough to eat right now,” Sokina recalled her son saying over the telephone.

Officially, the high-security penitentiary in Vakhdat, a short drive from Tajikistan’s capital, Dushanbe, holds more than 1,500 inmates. The real population may be far greater since intense overcrowding in Tajik prisons is the norm.

It is no surprise Sokina’s son was not able to get his share. Once the sun slipped over the horizon and the day’s fast could end, it would have been a rush for inmates to eat what they could.

But a few days after Sokina spoke with her son last month, he was dead, killed in a burst of prison bloodshed whose true underlying causes may never be fully understood. He never got the food.

“My son left this world hungry. All he asked was for me to bring him something tasty and filling,” she said, her eyes brimming with tears.

The government was unusually swift in pushing out its narrative. A similar outbreak of prison violence late last year prompted days of stonewalling.

This time, the Justice Ministry put out a statement the day after the disturbances, which took place in the evening of May 19. They said the trouble began with fighting among two camps of inmates. On one side were adherents to the Islamic Renaissance Party of Tajikistan, or IRPT, an opposition group banned in 2015, the ministry said. On the other, there were militants with the Islamic State group.

Officials say the instigator of the bloodshed was a 20-year-old called Behruz Gulmurod. He is the son of Gulmurod Khalimov, a former Tajik police colonel who achieved notoriety after defecting to become a high-ranking Islamic State commander. What authorities say is that a group of Islamic State militants held inside Kirpichniy first killed three prison guards and that they turned on other prisoners, executing five of them. Of those, two were veteran members of the IRPT.

The final death count was 32. Three prison workers and 29 inmates. The official story does not attempt to explain this scale of fatalities.

The government story could be true. It is just as likely – if not more so – that it is a total fabrication from start to finish. The Tajik government repeatedly engages in transparently falsified accounts of security incidents and it never permits outside parties to carry out their own investigations.

The Interior Ministry has ordered the relatives of the dead to refrain from speaking to reporters, arguing that this could sow instability. Failure to abide by this injunction would likely incur reprisals. All those that have provided testimonies to Eurasianet have done so on condition of anonymity. Names have been changed or withheld and crucial biographical details omitted to avoid interviewees being identified.

On May 20, Sokina was visited by local police officers, who instructed her that she could go to the prison to collect her son’s body.

“I just could not believe it. We had seen one another just a short time before,” she said. “He used to ask me to visit him as often as possible. He would say there was no need to bring him anything, the main thing was that I should visit.”

When Sokina and other members of the family went to the gates of the prison, they were made to wait. For hours. Many other relatives of dead prisoners were in same situation. In the end, police officers told them the government would bury the bodies itself.

“We began to argue with the police officers. They refused to treat us like human beings, they demeaned us. First they said they would bring out the body, and then they said they wouldn’t,” Sokina said. “I was not even allowed to say goodbye to my son. We were not told what happened, how the rioting broke out, how my son was killed.”

After much arguing and wheedling, a group of relatives was delivered to a cemetery in Dushanbe. There, seven bodies wrapped in sheets were unloaded from a truck.

Sokina said that the security personnel accompanying them would not allow the mothers to see the faces of the dead, which sparked another swell of indignant protests.

“I lost my son. There were six other families who lost a husband, a father, a son. And they did not want to show us our children. It was me that raised my son, not them. It is easy to kill but hard to raise a child. Despite all our pleading, the police remained mute, they would not answer us,” she said.

When she spoke with Eurasianet, Sokina still bore the scratches on her arms from when she struggled with guards as she tried to scramble to see her son.

The last time Alimurod Makhanov’s family spoke with him, they sensed that something was off.

“He said that the security rules in prison had been intensified. That they were running additional checks. He seemed overwhelmed. He asked us to look after his children if something happened to him,” said Aziz, a member of Makhanov’s extended family.

Makhanov was convicted in 2013 on charges of plotting a terrorist attack in Dushanbe. Authorities say he belonged to a militant organization called the Islamic Movement of Turkestan.

Following his death, Makhanov’s family has received no answers.

“We have not been told anything about whether he was involved in the riot. How was he killed? If he was not guilty of anything and they murdered him, shouldn’t his family get some aid?” Aziz asked.

The family is struggling even to get any of Makhanov’s personal effects.

“His mother cannot take in what has happened, because we never saw the body,” said Aziz. “We do not know who we have to ask to at least get his clothes. We want his clothes as a memory of him.”

One of the few bodies to be transferred to the family was that of Sattor Karimov, who is also known as Mahsumi Abdusattor, a member of the IRPT’s supreme political council. The relatives only learned about his death through the media.

Karimov’s family say they believe the body was only relinquished after they threatened to embark on an international information campaign. The authorities blinked, they say.

“There were three knife wounds in his back, there were stab marks in the area of the heart. Something heavy hit his head, the skull was smashed. There were also knife wounds on his hands,” one family member, Khurshed, told Eurasianet.

Like many others, Karimov’s relatives are not buying the story they have been offered.

“Our only requirement is that a thorough investigation be carried out and that those responsible be punished,” Khurshed said.

Another of the three IRPT fatalities – party founder Said Kiemitdin Gozi – was buried without ceremony by the government. His family were denied the opportunity to view the body and perform Islamic burial rituals.

Gozi was extradited to Tajikistan from Russia in 2017. He was later convicted by the Supreme Court to 25 years in jail on extremism charges. That term was later reduced to seven years.

Only one week before the bloodshed, prison officials had called the family with news of a possible early release.

“We were told that he had been amnestied and that certain formalities had to be performed before his release. He was already supposed to be home last week,” said Mehroj, a relative of Gozi’s.

All that has been seen of Gozi since his death are the photos of his body that surfaced on the internet. It is not known who produced and distributed the images. All that can be see is that Gozi has slashes across his neck and chest.

Like Makhanov, Gozi too appeared to betray premonitory signs that something was looming.

Akhbor, a news website based in Prague that often receives leaked material from government sources, published an audio file of Gozi recorded two days before his death. In it, the 67-year-old can be heard reciting these verses: “The day will come when we lose one another. One by one, our circle will dwindle […] and only in our memories will we give rise to laughter and sadness.”

Gozi’s family is perplexed about how he would have got involved in any kind of physical confrontation.

“[He] was ill when he was arrested. He was largely confined to a wheelchair,” Mehroj said. “Why isn’t the footage from all the security cameras that the prisons have installed been made public?”

The government narrative is also weakened by officials’ repeated propensity for casting the IRPT in the worst possible light. Until 2015, the party was just about tolerated. That year, everything changed. The party was first banned and then labeled an extremist organization – in effect rendering all its supporters something akin to members of a terrorist organization.

In its desperate bid to convince the world that it was going after militants, not just a largely secular and moderate opposition movement, officials would at times seek to conflate IRPT with the Islamic State, or even the Iranian government.

So it was that in the second half of 2018, a Dushanbe court sentenced Fahriddin Gulov, who it identified as an IRPT member, to 26 years in prison on terrorism changes. The IRPT has repeatedly denied any links to violent plots.

But in the Interior Ministry’s list of killed Kirpichniy inmates, Gulov is described as a member of the Islamic State group. A similar inexplicable conversion appears to have occurred with several other people on the same list.

With the authorities unable or unwilling to clearly distinguish who precisely is in its prisons, it becomes difficult to lend strong credence to their accounts.

In the end, Sokina did manage to get a look at her child, but only his face.

According to Muslim belief, all sins committed in this world will have to be repaid in the next. In the event of a premature death, it is important for parents to ensure the passage of their offspring is made as smooth as possible. For this, they forgive their children for whatever sins they might have committed. This one thing Sokina was able to do.

Sokina said she wants her family to dig up her son’s body, to wash it, to read prayers over the body and for him to be reburied with all the proper religious rituals. And they want to see his body properly. To see if he was shot or stabbed. To understand what happened. Clerics have advised her against pursuing this.

“I want to know my child’s cause of death. How did he die? This is the holy month of Ramadan – the month of goodness. How could somebody have committed murder in a month like this? Even if he was a criminal, he was serving his sentence in prison, so why was he punished this way?” Sokina said.