Officials insist they are testing for coronavirus and finding no cases. 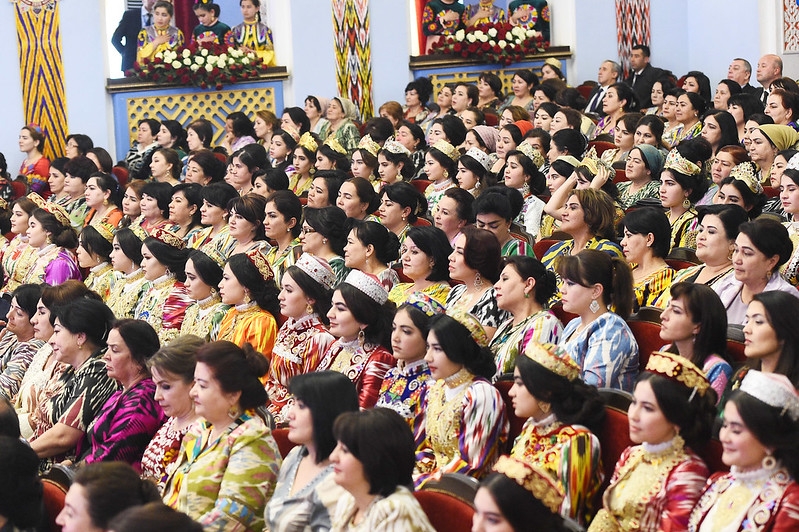 Happy together: Tajik officials have disregarded advice to avoid holding mass events to stem the spread of the coronavirus. (Photo: Presidential Flickr account)

A spate of deaths in Tajikistan over the past few weeks is nurturing only more doubt around the insistence of officials that coronavirus has made no inroads into the country.

The first was the death on the last day of March of a 60-year-old man in the northern Sughd region. Health officials informed the family of the deceased that he had been diagnosed with pneumonia.

This death might have gone mostly unnoticed if RFE/RL’s Tajik service, Radio Ozodi, had not reported that the Jabbor Rasulov District hospital, where the man had undergone treatment, was placed under quarantine after his passing. As the broadcaster also reported, the man had recently returned from a wedding in nearby southern Kyrgyzstan, where the epidemic has taken a solid hold. Despite Kyrgyzstan already representing a risk area at the time of his travels, which took place in the last third of March, the man was not placed in preventative quarantine.

The authorities have categorically denied that this death was linked to coronavirus, although there are multiple grounds for uncertainty.

There are no testing facilities for COVID-19 in northern Tajikistan. As of April 14, the only two laboratories understood to have the capacity for performing polymerase chain reaction-based tests are in Dushanbe. Officials say two coronavirus tests were carried out on the Jabbor Rasulov District patient, who has been named as Habibullo Shodiyev, and that they both returned negative results.

But it is far from certain that specialists in Dushanbe would have necessarily confirmed a positive result, given that considerable political premium is being placed on Tajikistan retaining its coronavirus-free status. President Emomali Rahmon suggested on March 22 that Tajiks had attained that achievement by keeping their homes clean.

Anxiety escalated into alarm in the Jabbor Rasulov District earlier this week when it was learnt that an acquaintance of Shodiyev, a man called Hojimuhammad Toshev, had suddenly died of what health officials have attributed to heart failure. An official in the Sughd regional health department told Ozodi that Toshev too had been tested for coronavirus and the results had returned as negative.

There have been suspect incidents in other parts of the country.

On April 13, the Health Ministry announced the death of Oishamoh Alimova, a 58-year-old cleaner of the Khatlon Central Hospital in the city of Bokhtar. The official cause of death, which occurred on April 12, was given as complications arising from tuberculosis and heart problems. Her relatives deny she had tuberculosis, but confirm she suffered with a weak heart.

What is especially confounding about the official explanation for Alimova’s death is how health officials could have overlooked that fact that somebody with tuberculosis was working at the Khatlon Central Hospital, of all places, at that specific time.

Alimova was among multiple employees being required to live in the hospital together with people who had been placed there under isolated observation after returning from abroad in the wake of the intensification of the global coronavirus pandemic. As a result of that, Alimova may have been in close proximity to the quarantine subjects for a period of anywhere up to two weeks.

And then there is yet another episode that has been attributed to tuberculosis. Shodmon Rajabov, a 61-year-old cook, died in the Sughd province’s Shahriston district on April 11.

What is prompting suspicions is that Rajabov’s fellow villagers have told Ozodi that funeral rites were conducted without the body. One villager told the outlet that the people were told to come for the funeral at 2 p.m. on the appointed day, but they discovered upon arrival that Rajabov had been buried in secret by medical personnel earlier that morning.

Nobody knows the exact location of the grave. Officials have said Rajabov’s close relatives are at their home and not in isolation.

The denials are not reassuring the public as much as the government may hope.

“I have underlying conditions. I have problems with my heart, so I am afraid of getting infected with this virus,” Dushanbe resident Favziya Norova told Eurasianet. “I just don’t know whether or not I should be going to work.”

A Tajik political analyst who commented to Eurasianet on condition of anonymity said that he was convinced the government would emulate China’s initial policy of dissembling over any coronavirus cases, even if they are discovered.

“Until the virus becomes a mass phenomenon, the authorities will hide the fact. But if it does become a mass phenomenon, people in this country are going to be in trouble because we have a limited number of ventilators,” the analyst said.

The Health Ministry says it has 100 ventilators, but that claim too cannot be accepted at face value in light of how routinely the Tajik government trades in untruths.