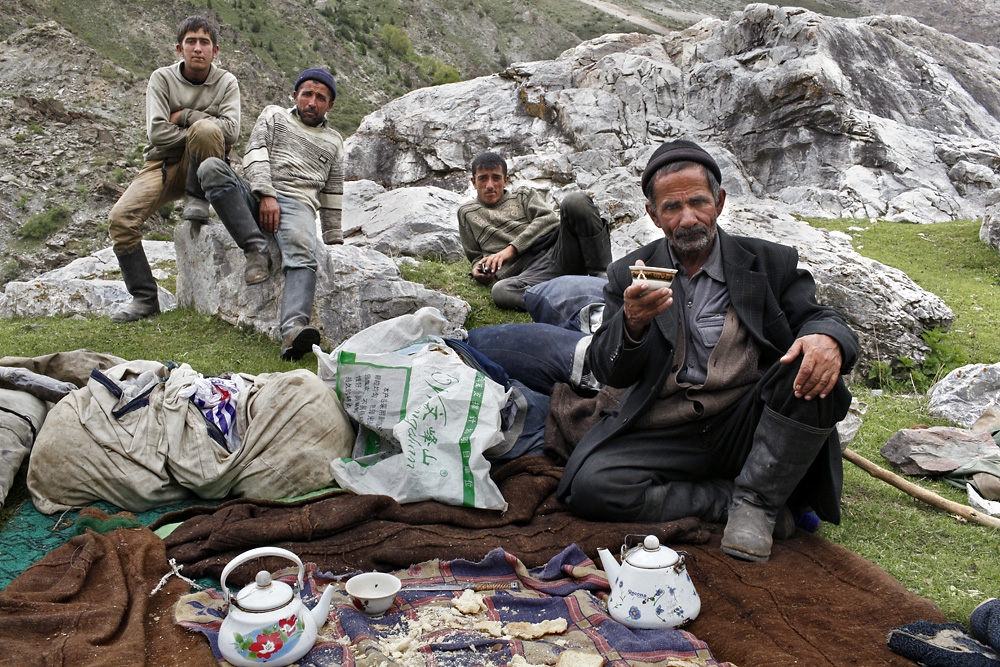 Yaghnobi shepherds take a tea break during the annual livestock migration to their ancestral grazing grounds. 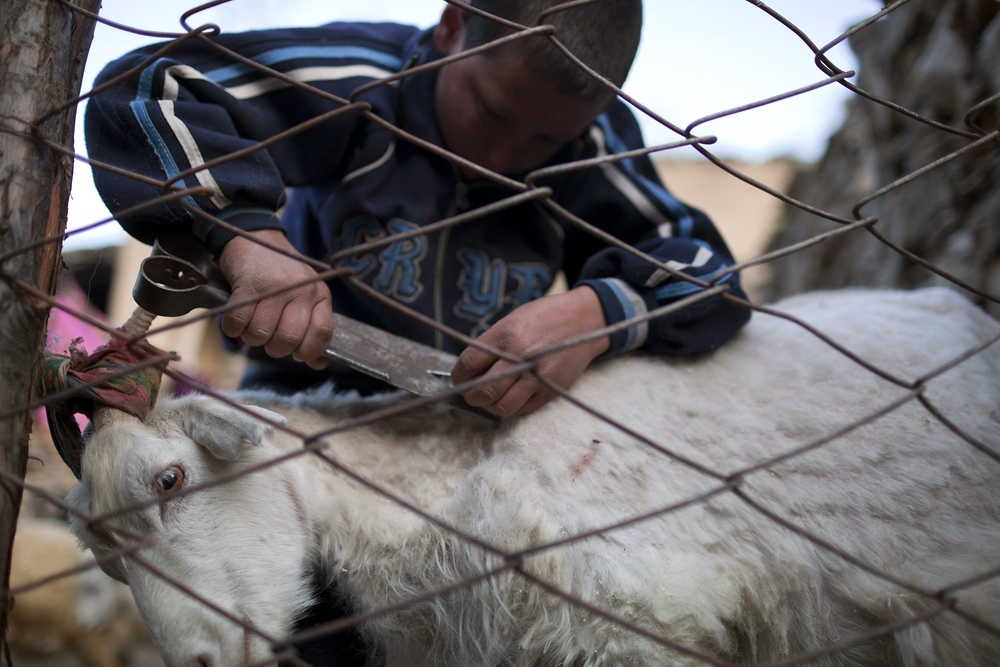 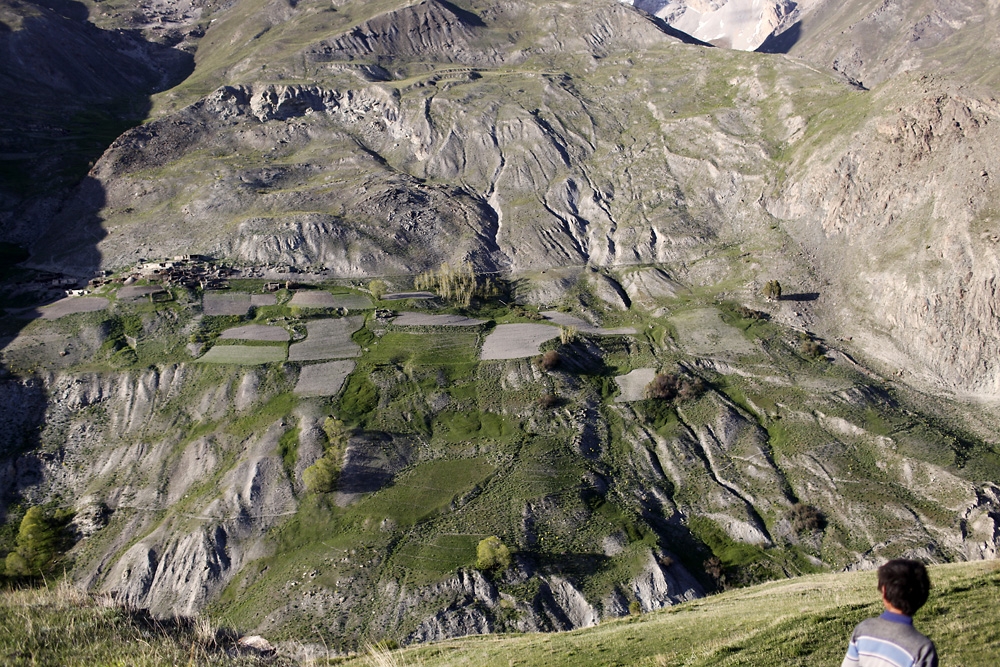 A Yagnobi boy looks across the Yagnob Valley to the village of Kashi. 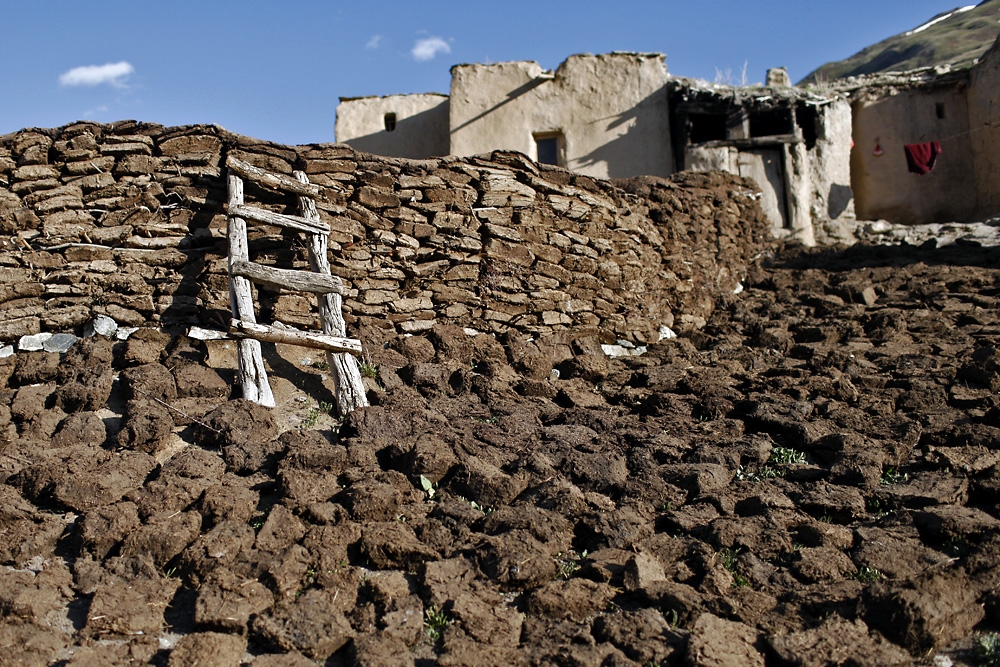 Cow dung patties dry in Nometkon in preparation for a long winter. 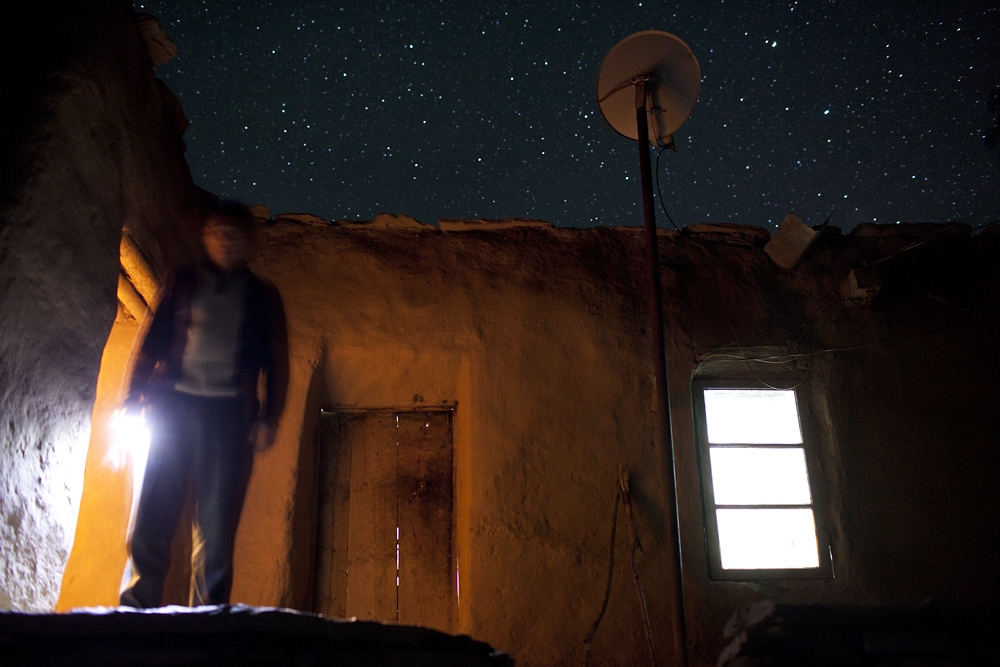 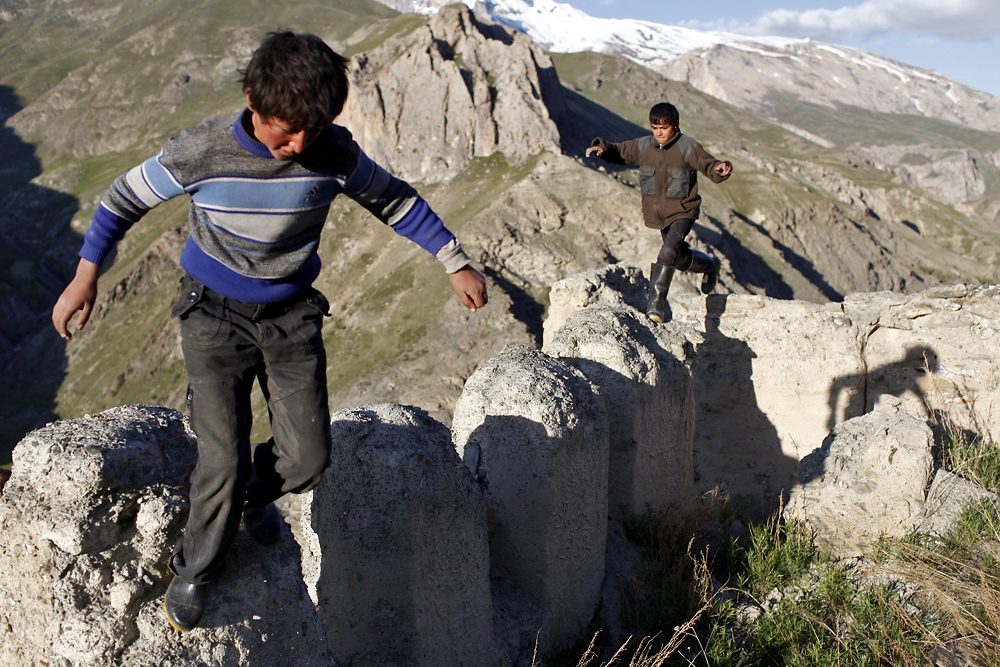 Boys hop between the ruins of an old house in Chukkat village. 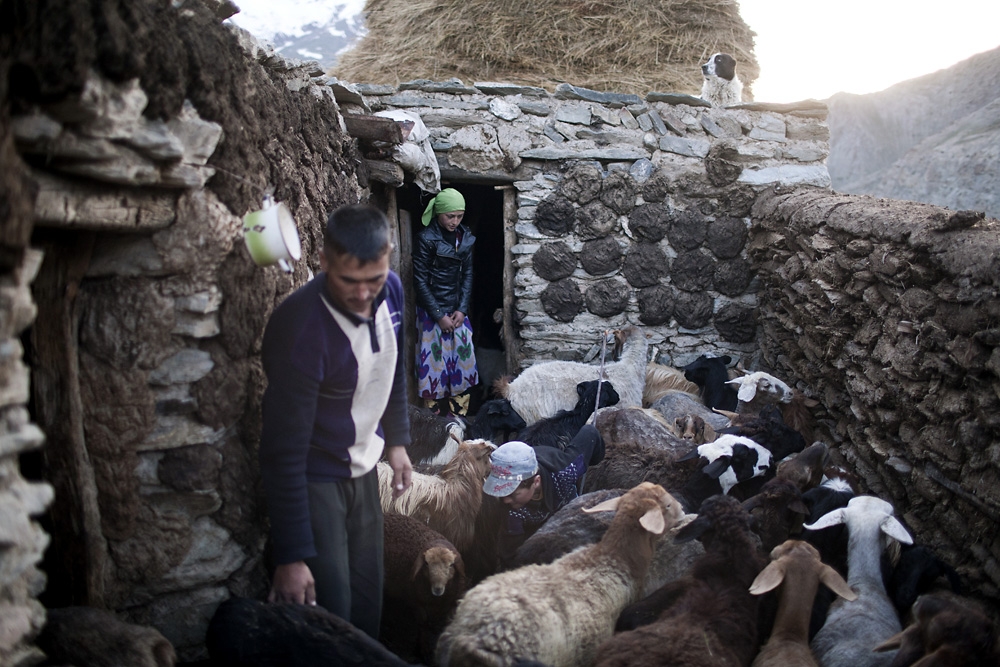 A Yagnobi family sorts sheep at the end of the day in Nometkon. 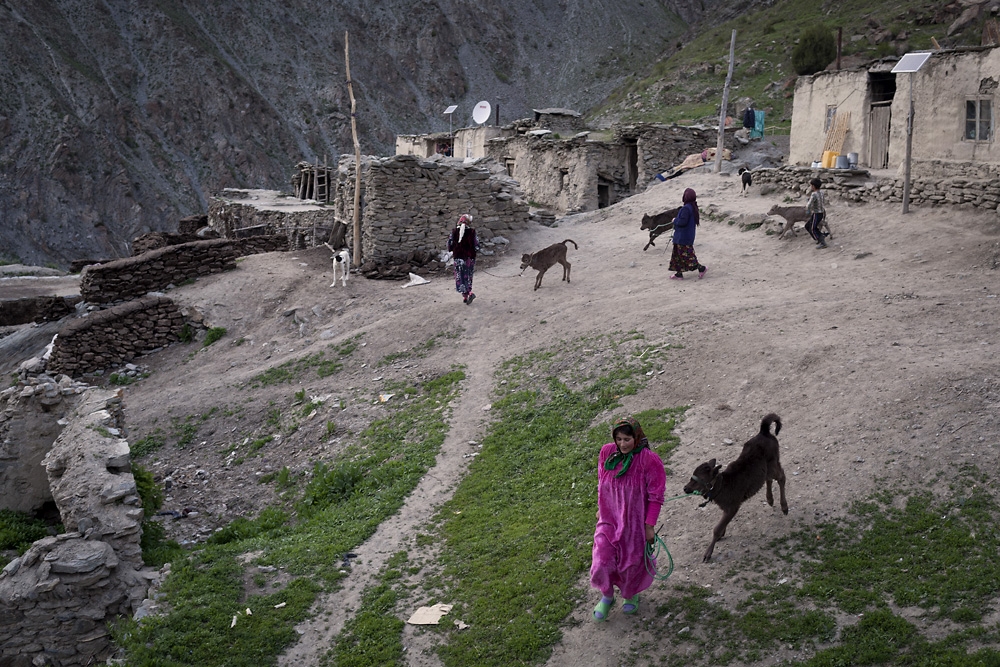 Families claim their livestock after a day of grazing in the village of Bedev. 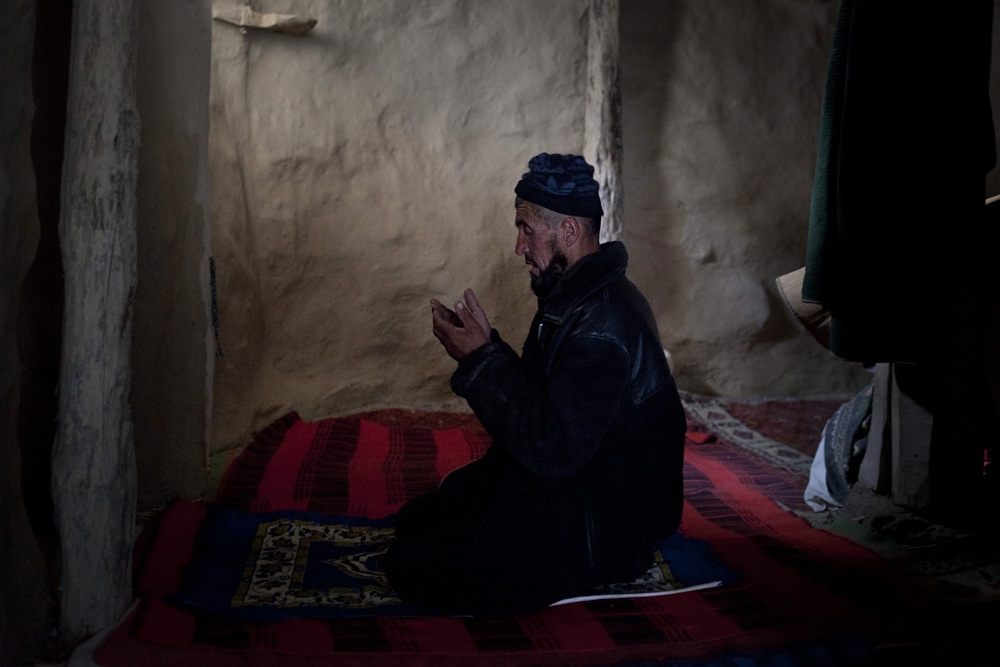 The village mullah prays in the local mosque in Bedev. 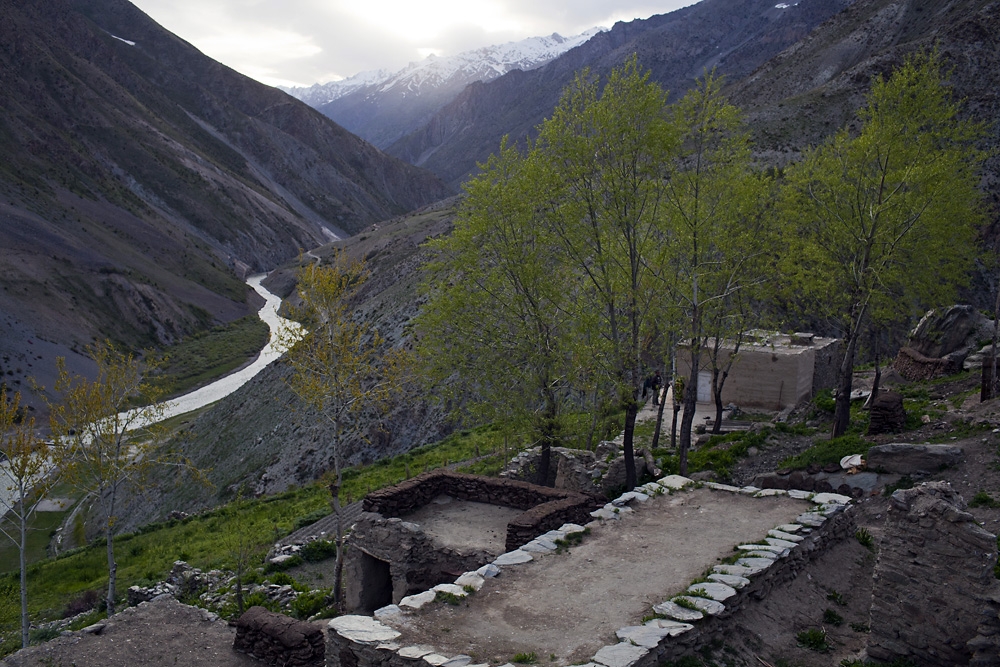 The village of Bedev is the first Yagnobi-speaking settlement in the valley - a 30-kilometer walk from the closest road. 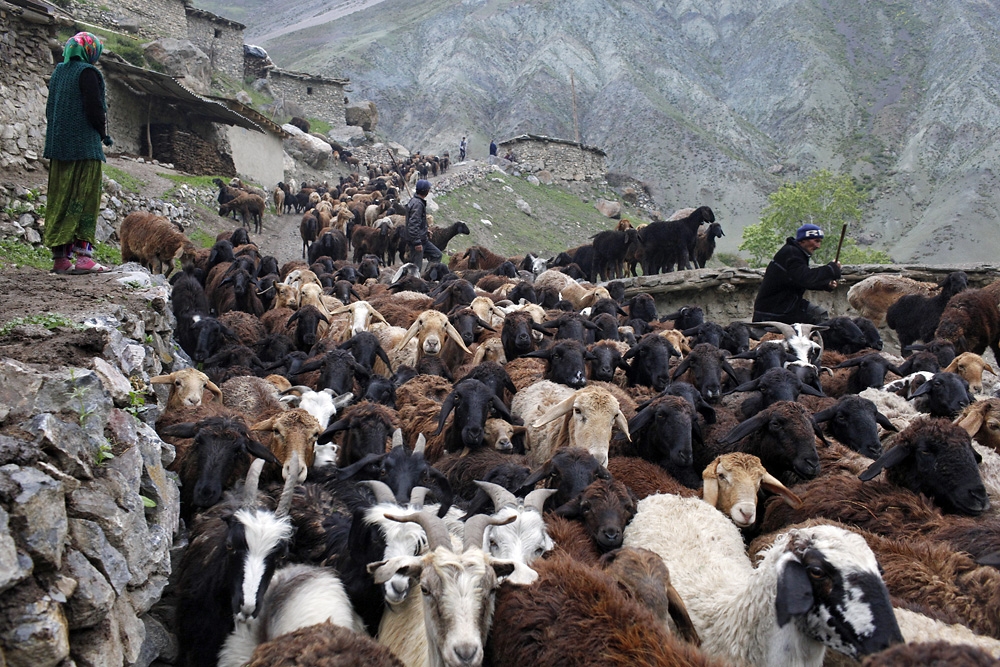 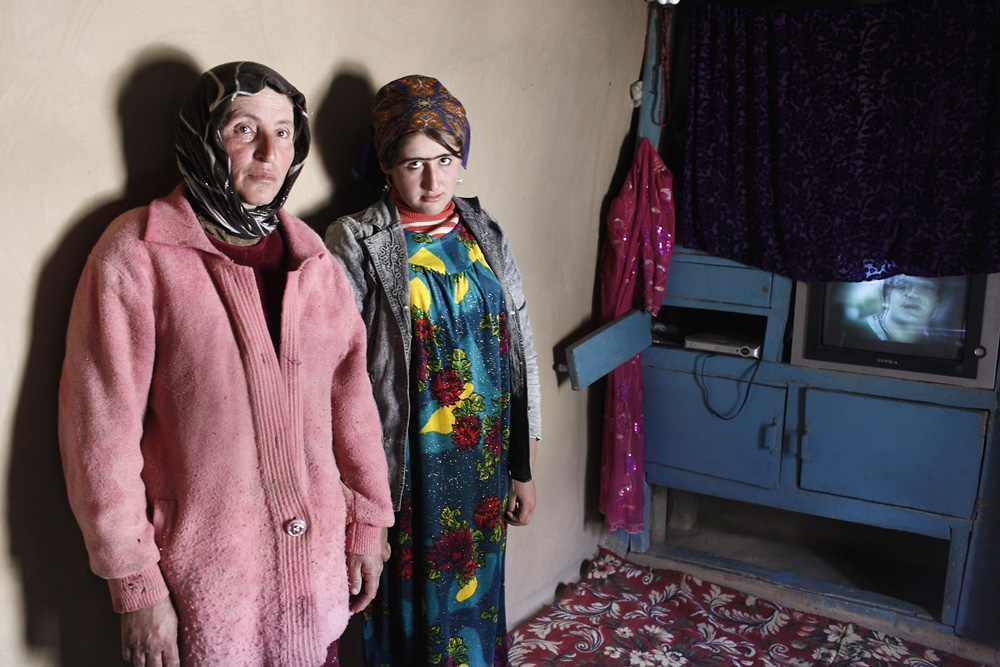 Women in Yaghob have few work opportunities and generally marry within the valley. 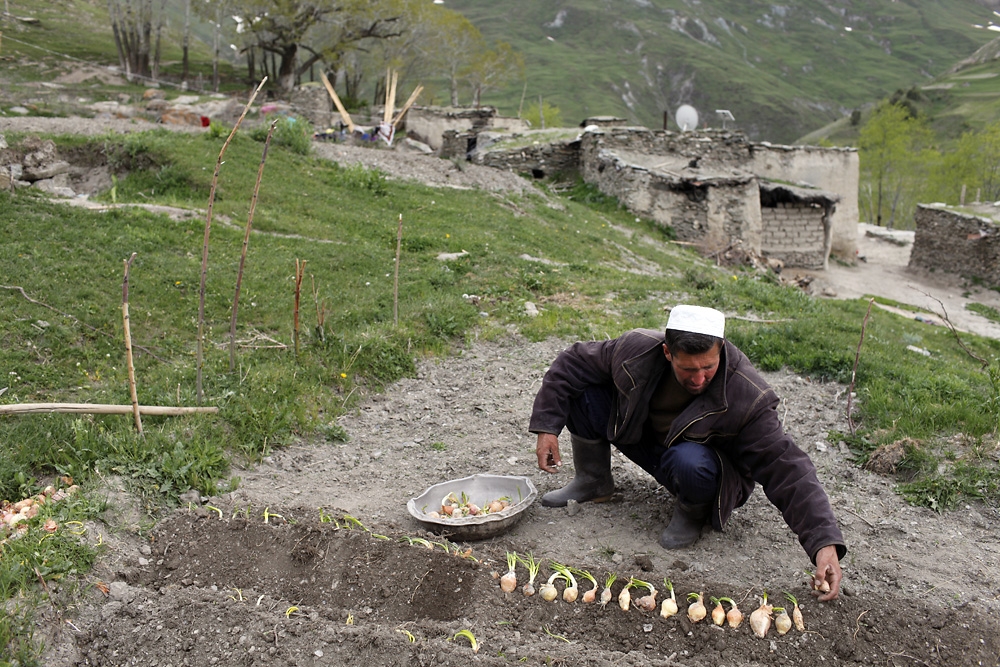 A Yagnobi man plants onions to save for the winter.
prev
next

For nearly 600 years, the lingua franca along a lengthy Central Asian stretch of the fabled Silk Road was Soghdi, a proto-Persian language. Even after the rise of Islam, a 9th-century king, Ismail Somoni, continued to promote a variant of Soghdi throughout his domains in what is today Tajikistan.

The leaders of post-Soviet Tajikistan now recognize Somoni as an important builder of the nation's cultural identity. His eponymous plaza is the central square of the capital, Dushanbe; and the Tajik currency is named in his honor. Yet the language he fostered is facing a survival crisis. Barely 200 kilometers from Somoni Square today, some 400 of the world's last speakers of a Soghdian dialect known as Yagnobi are scratching out an existence in a remote and breathtaking mountain valley.

Down through the ages, the Yagnob Valley has protected residents from the invaders, including Alexander the Great’s army. But the isolation that has helped preserve their language is now hindering their ability to adapt to 21st century conditions.

A pivotal moment came in the 1970s, when Soviet central planners relocated the Yagnobis wholesale -- roughly 3,000 people -- by helicopters and buses to Zafarabad, a cotton-producing lowland bordering present-day Uzbekistan. The rationale for this experiment in social engineering was to rescue the Yagnobis from living in a “geodynamic danger zone” prone to earthquakes. Historians suspect central planners were likelier motivated by a growing need for manpower in cotton-growing districts, as well as by a reluctance to build costly roads and infrastructure in the Yagnob Valley. Today, most of the country's remaining 4,000 Yagnobi speakers are concentrated around Zafarabad and Dushanbe.

During Mikhail Gorbachev’s liberalization in the late 1980s, Yagnobis were allowed to drift back to their native valley and even given some development assistance. But Tajikistan's independence and subsequent civil war diverted official attention again, and the Yagnob Valley was condemned to another cycle of neglect. In 2005, Dushanbe abolished a 1989 Soviet law that allotted children two hours of classes in Yagnobi per day.

Then, just last year, President Imomali Rahmon paid a visit to the valley to urge the remaining 400 Yagnobis there to develop the region as a tourist destination, apparently reviving a 2007 proposal to create an “Ethno-cultural Yagnob Park” under the joint auspices of UNESCO and the Tajik state. But it’s hard to imagine such a project taking shape in a country where the government is hard-pressed to provide even basic services.

Given the lack of infrastructure in the Yagnob Valley, several thousand Yagnobis – by far the bulk of the ethnic minority’s overall population – prefer to remain in Zafarabad rather than return to the valley. Even those few Yagnobis who have returned find it hard to hang on there, according to Ghoib Satarov, a farmer in Nometkon, the last village on the tenuous dirt track, often snow-blocked, that is the valley’s only "road."

“Every year, one or two families leave the valley, mostly to Dushanbe,” he says. “Some fail to find a new life or meaningful work in the cities, and then they return here. But most never come back. Those that settle in Dushanbe and other cities often forget the Yagnob language.” Ironically, this did not happen during the 1970's relocation precisely because the Yagnobis were displaced so systematically. Whole villages were transplanted together into concentrated Yagnobi neighborhoods in Zafarabad, allowing them to continue speaking their language.

Modernity has also served to undermine the Soghdian dialect. Yagnobi has no words for concepts like "car" or "radio," or even numbers greater than 10. These terms have to be borrowed from Tajik or Russian.

Imagine, then, how difficult it would be in Yagnobi to describe Rahmon’s official visit to the region last year. Speaking in Tajik for the benefit of EurasiaNet.org, a group of Yagnobis shared their mixed feelings about the president’s visit.

“He … gave a speech promising schools, roads and clinics. He urged us to continue speaking our language at home,” related a Yagnobi cotton farmer, taking a break from spring planting near Zafarabad. “Then he left – his visit in total was less than two hours. But he was the first big leader ever to visit our valley. So far, out of all his promises, only a school [building] has materialized.”

Another farmer chimes in: “How can the president simply urge us to continue to speak our language, but not help create dictionaries, classes or a support system? When he visited, the valley people had to import [Tajik] children from the district center to give the welcome speeches and poetry recitations. Our Yagnobi children are not educated enough even to welcome their ‘leader.’”

Other official visitors to Yagnob can receive a very chilly reception. One mother in Bedev relates how army officials came to the valley to search for military conscripts. "Some of our sons have never gone to school and have no idea even who the president is. How can you expect boys to serve in the army when they receive so little from the government? It’s no surprise that they [the boys] hid in the mountains until the soldiers left.”

But for a few of the hardiest Yagnobis, there's still no place like home. “I had the chance to leave but my father convinced me to stay,” relates Ghoib Satarov, a farmer in his early 30s who moved from Zafarabad back to the valley as a teenager. “In Zafarabad, space and water is limited, conflicts with neighbors arise, taxes and costs are many. Here in Yagnob, we are free. Our livestock can graze freely. If the government delivers on its promise to build a school and a hospital, we will not need anything more.”