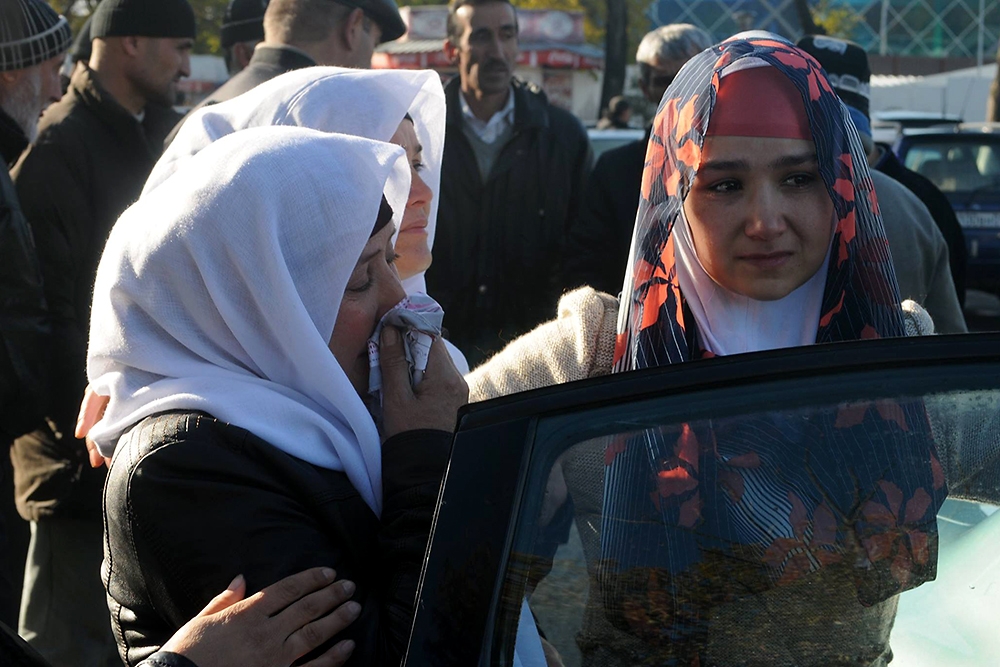 Zarina Yunusova (right), the mother of Umarali Nazarov, is comforted by friends and family upon her arrival in Dushanbe on Nov. 16 with the coffin bearing the remains of her five-month-old son. The toddler died in police custody in the Russian city of St. Petersburg more than a month earlier. (Photo: Avesta.tj)

On the morning of November 16, a plane flew into Tajikistan’s main airport from the Russian city of St. Petersburg bearing the grimmest of cargos — the body of five-month-old Umarali Nazarov.

The death of the child, under circumstances that remain mired in confusion, has sparked indignation in Tajikistan, where resentment has long simmered over the treatment Tajik labor migrants receive in Russia.

The tragedy unfolded on October 13, when police in Russia’s second-largest city detained Umarali’s mother, Zarina Yunusova, and his uncle, Daler Nazarov, on suspicion of violating migration laws. Many Tajiks live and work in Russia without proper documentation and are targeted in regular sweeps by migration authorities.

The adults were placed in a holding cell, while the baby was taken away into care to St. Petersburg’s Tsimbalina pediatric center for parentless children. Yunusova maintains that Umarali was separated from her by force; Russian police say the handover was voluntary.

Later that same night, Umarali died suddenly of causes that were not immediately apparent.

After several weeks of clamor and demands for a thorough investigation, Yunusova was quietly deported to her home country, where authorities appear intent on forgetting about the episode for fear of souring relations with Russia. Yunusova has been banned from returning to Russia for five years.

Yunusova’s uncle, Mirzo Shodiyev, who met her at Dushanbe airport, told EurasiaNet.org that the family was given assurances by Tajik authorities that a fresh medical examination would be pursued in her home country. Still gripped with grief, Yunusova declined to speak to reporters.

Shodiyev said he received a call from a representative of the Tajik embassy in Russia and was told not to collect the coffin carrying Umarali at the airport so that the child’s body could be taken to a laboratory for tests.

All the same, airport staff loaded the coffin into the car in which Yunusova waited in the parking lot for six hours, in vain. “The medical examiners never arrived, and we understood that Zarina was sent to Tajikistan so the whole affair could be hushed up, and so we decided to bury him that same day,” Shodiyev said.

Shodiyev said the family has received no visits from Tajik officials to express their condolences over Umarali’s death.

Medical workers involved in the case have volunteered several explanations for what happened. Initially doctors at the Tsimbalina center said the baby succumbed to a respiratory tract infection. Later, sudden infant death syndrome was suggested as a cause of death.

On November 10, medical experts finally concluded that Umarali had died from acute cardiopulmonary failure resulting from a cytomegalovirus infection. Forensic experts determined that Umarali suffered from a variety of illnesses, including pneumonia, degeneration of the liver and pancreas, damage to the stomach, anomalous changes to the adrenal gland, a chronic inflammation of the small intestine, and swelling of brain and spinal cord.

No independent examination has been carried out and Umarali’s parents have been denied access to the final medical report.

Lawyers for the family in St. Petersburg are deeply skeptical about the cause of death offered, as are health officials in Tajikistan.

No Tajik officials have been willing to go on record with their opinions, however, as they are barred from doing so.

“A cytomegalovirus infection is present among 80 percent of the population. But as for it affecting cardiopulmonary functions, that I cannot understand. How can a virus affect the functions of the heart and lung canals?” one senior health official told EurasiaNet.org on condition of anonymity.

The official said Umarali’s young age might have made him vulnerable, but that the suddenness of his death was difficult to explain. “Even if you look on the Internet, you’ll see that it is a widely accepted fact that viruses cannot affect such a rapid deterioration, and fatally at that,” he said.

Reactions in Tajik society have been emotive, but official ties between Tajikistan and Russia are of existential importance to the impoverished Central Asian nation, so few will air their criticisms openly, beyond online commentary boards and social media. Given the Tajik government’s authoritarian tendencies, citizens are reluctant to speak out.

Yunusova’s lawyers in St. Petersburg had organized face-to-face meetings, to take place on November 16 and 17, between her and migration officials and representatives from the pediatric center where her son died. As the only individual in the case legally registered as a complainant, Yunusova was theoretically at liberty to demand further clarity, but with her now out of the country, nobody is authorized to take on that role.

The November 12 court ruling to uphold a deportation order for Yunusova stunned even hardened human rights monitors. Mikhail Fedotov, chairman of the presidential council for human rights, appealed to the General Prosecutor to reconsider, but to no avail.

Still, Yunusova would have had time to attend the scheduled meetings with Russian officials, but left before her November 17 deportation deadline was up.

“The face-to-face meetings would have been a great help because the matter would have got going again, the investigation could be carried out, because the witness statements to date have been rife with contradictions. For example, Zarina states that her child was taken from her by force, while the female police officer says it was voluntary,” Yury Serov, a lawyer representing Yunusova in St. Petersburg, told EurasiaNet.org.

Serov said he was disappointed to see his client leave early, but that the decision appeared to have been made for her.

“Before Zarina’s flight, I was called by Tajik diplomats and told that on November 14 there was a gathering of senior figures in the Tajik diaspora and embassy officials, about 30 people, and that a decision was taken that Zarina should leave for Tajikistan as soon as possible,” Serov said.

Yunusova’s husband, Rustam Nazarov, has remained in Russia, but is only being recognized as a witness, not a complainant. That status denies him the right to press for certain further investigations. Nazarov has said he intends to stay in St. Petersburg to see the case to its conclusion, but there are concerns that he too could face deportation.