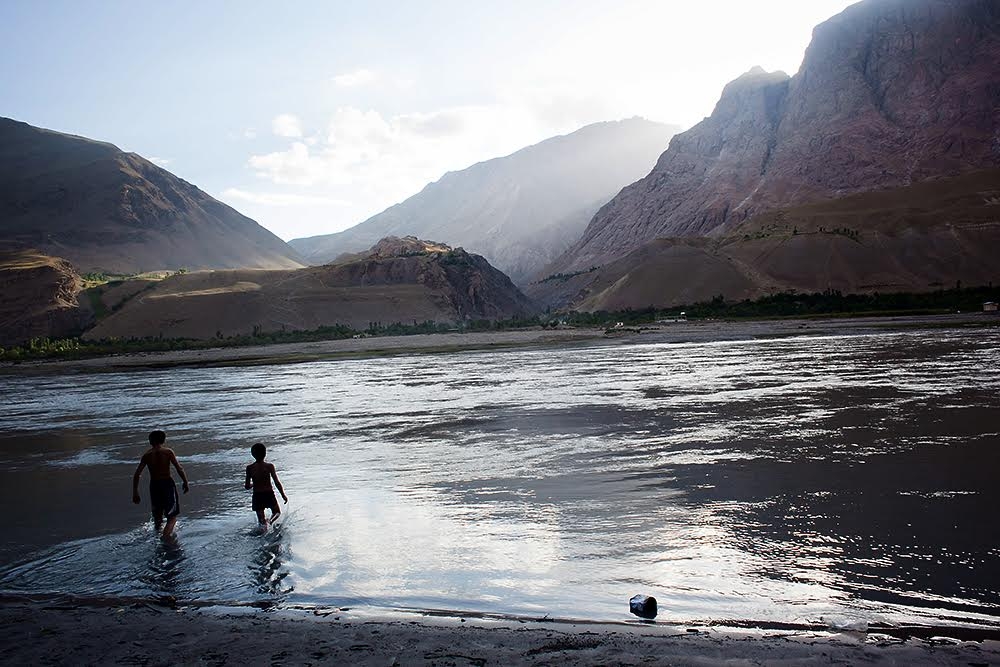 Two boys go swimming in the Panj River upstream from where the four border guards were kidnapped, allegedly by Afghan militants, in December. The Tajik government claims the four conscripts were fetching firewood across the river in Afghanistan when they were abducted. (Photo: David Trilling)

After six months of captivity in Afghanistan, nobody knows when or if four Tajikistani border guards are coming home.

The four conscripts were kidnapped, allegedly by Afghan militants, on December 19 along the wide and twisting Panj River, which marks the border between Tajikistan and Afghanistan. Their commander had sent them to search for firewood – reportedly on the Afghan side of the river. All four served in Unit 2610 of the Panj Border Service detachment, about four hours’ drive south from Dushanbe, Tajikistan’s capital, an area rife with drug smuggling. When they were captured, the young men were all between 19 and 24 years old.

Officials say the captured conscripts are fine, that they are being held by the Taliban (rather than one of the many other insurgent groups operating in the region) and that negotiations are ongoing. But the families of Farhod Kalonov, Tuichiboy Nurboev, Mehroj Shodiev and Sirojiddin Davlatov are nevertheless despairing. And critics say the government is not doing enough to secure their release.

“The [captured] frontier guards are healthy and alive. We continue negotiations about their release, but the Taliban have not named their conditions,” a source at the Border Service, which operates under the State Committee for National Security (GKNB), told EurasiaNet.org on condition of anonymity because he was not authorized to speak with the press. He said the Tajik conscripts were kidnapped on the Afghan side of the border, in a remote area where the river is wide, shallow and poorly guarded. The source insisted Tajik security officials are working with their Afghan counterparts to secure the conscripts’ release, but would not provide operational details.

In May, reports emerged from Afghanistan that the kidnappers had been killed in a firefight with Afghan government forces. Fighting in the region has been fierce this spring. But a month later, there is still no information about bringing them home.

Islomiddin Davlatov, 67, the father of 24-year-old Sirojiddin, told EurasiaNet.org that he talked to his son only once, six days after he was captured.

“We have addressed the president. … His security advisor, Sherali Khairulloev, told us that research and negotiations continue. What else can we do?” a tearful Davlatov told EurasiaNet.org. He added that he had not had an update from the Border Service for a month.

Sirojiddin’s sister-in-law, Adlyakhon Davlatova, told EurasiaNet.org that the boy had been in the military for only seven months when he was captured. “We don’t know what to do. His father is old, and he cries days and nights thinking about where his son could be,” Davlatova says.

Fatkhullo Shodiev, the father of 21-year-old Mehroj, told EurasiaNet.org he has approached anyone who will listen in government, including the military recruitment office, the Border Service headquarters and the president’s office, begging for help.

“I found out my son was captured 40 days after it happened – from him directly, when he managed to call us. He called, asked about our health, and then told us, ‘I was captured by mujahedeen while collecting firewood for our commander. About 20 Afghans surrounded us and took us to Afghanistan,’” the father recounted.

The boy then handed the phone to his Afghan captor. The Afghan said he wished not for money, but for a prisoner exchange, the elder Shodiev said. Reportedly, an Afghan citizen who was detained in Panj District on drug smuggling charges shortly after the kidnapping is related to one of the captors.

The elder Shodiev says Mehroj called several times, but could only say he was alive. Every time Shodiev tried to call back the numbers his son called from, they were not available. The last time they spoke was on March 28.

On April 6, a military court sentenced Alimuhammad Dodokalonov, acting chief of the Panj Border Service detachment at the time, to an eight-and-a-half-year prison term. He was found guilty of abuse of power, forgery and illegal logging. The military post driver, Umedjon Sanginov, who escorted the conscripts, was fined 28,000 somoni ($4,500), Radio Ozodi reported.

Some wonder if government officials are telling the whole story.

Tajikistan’s Border Service has a reputation for its sticky-fingered officials who act with impunity in remote locations. And Panj District is a known drug-smuggling route, where Afghan narcotics make it across the border by the ton for onward shipment to Russia. In 2013, five security officials at the Panj Border Detachment were arrested during a sting that netted 45 kilos of heroin and 66 kilos of hashish, local media outlets reported.

The UN Office on Drugs and Crime (UNODC) has found that narcotics production in Afghanistan has risen in recent years. Yet Tajikistan’s net seizures have fallen over the same period. Western officials often accuse corrupt Tajik officials of collaborating with major trafficking networks.

While local analysts are afraid to discuss publicly any link between the kidnapping and traffickers, there is a widespread feeling in Dushanbe that the authorities have not done enough to secure the conscripts’ release.

Dushanbe-based political analyst Parviz Mullojanov told EurasiaNet.org that the government could start by clarifying the identity of the kidnappers. “The government says in general that the Taliban did it, but in fact there are many smaller groups there,” Mullojanov said of the region in northern Afghanistan where the conscripts are believed to be held. He suspects the group is small and involved in drug smuggling.

“Usually, Afghan tribes sell hostages or trade them with other militant groups,” Mullojanov said. “Tajik diplomats should be more active, because from what the Border Service says, it is not clear [what the militants want].”