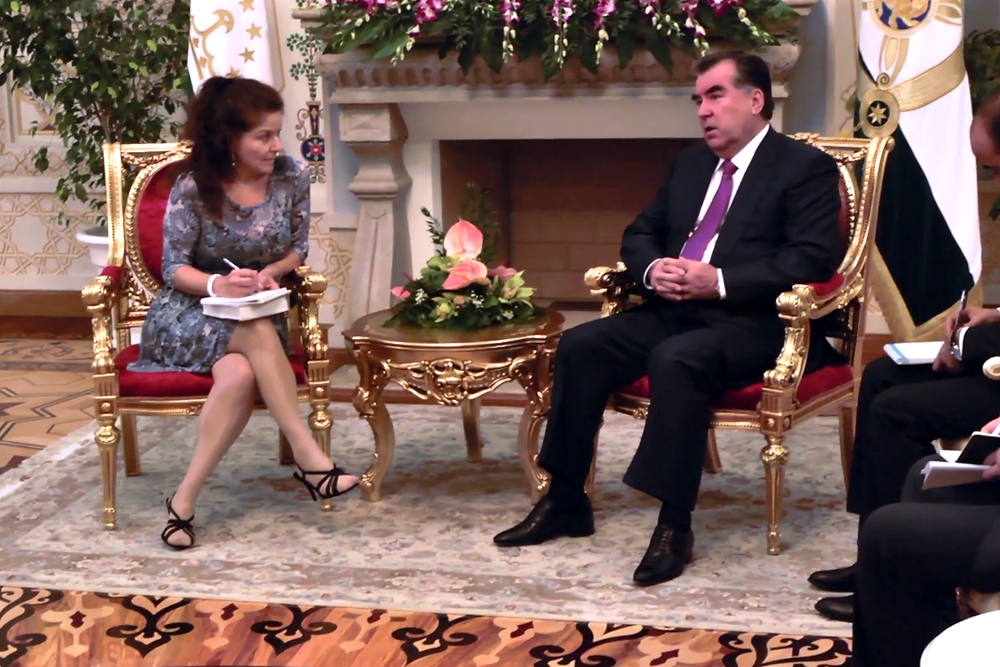 Tajikistan has one significant industrial asset, an aluminum smelter that dates back to the Soviet era. The state-owned plant, Talco, uses so much electricity it is responsible for regular, rolling blackouts around the country. Many Tajiks would like to know where Talco’s substantial profits go; the company keeps a tight lid on earnings information. But thanks to US disclosure laws, publicly available records show that a Washington lobbying firm has received a significant chunk of cash from the aluminum maker.

According to Justice Department filings, Talco pays the lobbying firm, Fabiani & Company, a $1.2-million annual retainer to “develop a favorable US-Tajikistan relationship” and “educate” American officials about Tajik President Imomali Rakhmon’s dream project: Rogun, the would-be tallest hydropower dam in the world. The contract, which began in October 2012, has led to dozens of meetings involving Fabiani representatives and US officials. Fabiani also has pushed story ideas that have evolved into puff pieces in US media.

A Fabiani employee told EurasiaNet.org that the company was hired to push back at negative perceptions of Tajikistan perpetuated by neighboring rival Uzbekistan, which is vehemently opposed to the dam. For Talco, Fabiani lobbies aggressively on Capitol Hill and targets “influential individuals and businesspeople,” while also striving to introduce Tajik officials to major engineering companies that might be interested in the construction of Rogun, said the lobbyist, who requested anonymity due to the sensitivity of the issue. He added that at the outset of many meetings with US officials and executives, few know where Tajikistan is located. But when the country is “tied to the Af-Pak narrative” – Inside-the-Beltway-speak for Afghanistan and Pakistan – people understand.

Fabiani disclosed its meetings with US government officials to the Justice Department under the Foreign Agents Registration Act (FARA) until the middle of last year. The firm’s employee would not say why Fabiani stopped filing FARA disclosure documents – although he said the Talco contract is “ongoing.” It is possible that Fabiani has decided that because Talco is not a foreign government, FARA fillings aren’t necessary. The lobbying firm’s House and Senate filings indicate it is still earning $100,000 monthly from Talco.

Fabiani’s contract is with Talco Management Ltd (TML), an entity registered in the offshore tax haven of the British Virgin Islands. Watchdog groups widely suspect TML is a vehicle for corruption. Acting as a middleman, TML buys Talco’s aluminum at a steep discount, sells it at market prices, and keeps the difference. Where the profits go is known only to a select few. TML’s registered address in the British Virgin Islands houses dozens of companies, including one that has been sanctioned by the US Treasury Department for laundering money and trafficking narcotics on behalf of Colombia’s notorious Cali cartel.

The International Monetary Fund has called Talco's financial operations “worrisome” and "nontransparent" and complained that the company’s financial figures are classified. The IMF added that the company could be a “major untapped source of tax revenues” in the impoverished country.

A 2008 US Embassy cable released by Wikileaks and attributed to then-US ambassador to Tajikistan Tracey Jacobson said Talco “serves as the president's cash cow.” Rakhmon sees Talco “as a means of generating income for himself, his family members, and his inner circle,” undermining the Tajik economy in the process, the ambassador allegedly wrote. “The people of Tajikistan effectively subsidize Talco, by living without adequate health services, education, or electricity.” Jacobson in the Wikileaks cable estimated offshore operations enabled Talco and top leaders in the country to steal “hundreds of millions or even billions of dollars” since 1992, the year Rakhmon came to power.

Tajikistan is the poorest country of the poorest region in the former Soviet Union. Over one-third of the country’s estimated 7.9 million inhabitants live below the poverty line, according to official statistics. Talco exacerbates the problem: According to a World Bank study, the smelter uses 40 percent of the country’s electricity at subsidized rates, which hurts the economy, Western diplomats say.

Talco’s reputation has been dented by international legal troubles. In 2008, following one of the most expensive cases in British legal history, the company settled out-of-court in London after trying to sue its former management for defrauding the company of some $500 million. The terms of the settlement are confidential. And in late 2013, Russian aluminum giant Rusal announced that a subsidiary had won a roughly $275 million judgment against Talco.

The Talco plant, located in Tursunzoda, about 40 miles west of Dushanbe, employs roughly 10,000 people in a country where unemployment is so widespread that hundreds of thousands of men must go abroad each year to find work. This winter, while it continued to pay Fabiani $100,000 per month, the company withheld employee salaries, citing lower aluminum prices, Asia-Plus reported on February 6.

It’s unclear what Fabiani has achieved for its client after dozens of meetings on Capitol Hill and at the State Department. In December, State announced it would provide $15 million in assistance out of the approximately $1-billion price tag for CASA-1000, a hypothetical power line for Tajikistan to export electricity to South Asia. CASA-1000 is an important element in the Obama administration’s New Silk Road strategy, but independent observers in Tajikistan worry that it would become just another income stream for venal officials. Without Rogun, CASA would not be profitable; but without CASA, neither would Rogun. In January, the Asian Development Bank, which had earlier promised to fund 40 percent of CASA, officially announced it was pulling out of the project, citing a lack of funds.

Rakhmon has staked his country’s future on Rogun, a project started in the 1970s and stalled since the collapse of the Soviet Union. Cost estimates vary from between $2 billion and $6 billion. And with downstream Uzbekistan fervently opposed to the project, few foreign donors are willing to get involved. To raise money, The Tajik government coerced citizens in 2010 to donate several months’ salary to the project. Cast as a patriotic duty, the ostensibly voluntary contributions saw teachers threatened with dismissal if they did not dip into their take-home pay – $30 to $40 per month at the time – to buy shares.  After several months, the campaign ended at the urging of foreign donors who asserted that it was increasing hunger in the country and risked plunging Tajikistan into recession. The campaign raised about $180 million, and there has been little accounting of the money.

In addition to lobbying US officials, Fabiani also has worked to promote a positive image of Tajikistan and Rogun among US media outlets. The Fabiani employee confirmed to EurasiaNet.org that he had been in contact with investment advisor Hilary Kramer, who has written four commentaries posted by the business news website Forbes.com that portray Tajikistan in a favorable light. Kramer’s writings began appearing soon after Talco hired Fabiani. “We go to her when there’s an investment angle,” the employee said.

In the commentaries, Kramer glosses over the topic of pervasive corruption in Tajikistan, even though the watchdog organization Transparency International ranks the country as among the most graft-prone states on earth (154th out of the 177 countries surveyed). Kramer -- who described herself at Forbes.com as “one of Wall Street’s most successful equity analysts” -- also repeatedly praises Rakhmon’s leadership, at one point describing the forced Rogun share-purchase campaign as an “IPO,” while urging the US Congress, Defense Department and USAID to help pay for the dam. The US Department of Commerce, for one, doesn’t share Kramer’s views on Tajikistan’s leadership, noting that the Tajik president, now in his 22nd year in power, is in charge of a country known for its “corrupt business environment and predatory behavior by government officials.”

Responding to a query from EurasiaNet.org, a Forbes representative said on February 13 that the magazine is investigating: “Forbes is investigating this matter. We have removed all of Ms. Kramer's posts about Tajikistan from Forbes.com while we look into this situation further.” EurasiaNet.org tried repeatedly to reach Kramer for this story. A member of Kramer’s “editorial staff” requested questions in writing. EurasiaNet.org complied with the request, but did not receive answers.

Kramer has also written favorable pieces about Azerbaijan, an energy-rich Caspian Basin state with a troubled record when it comes to corruption and respect for basic rights. In addition, Kramer has offered public praise on Forbes  for the Azerbaijan America Alliance, which also happens to be a Fabiani client.

It is uncertain whether Talco’s lobbying expenditures have brought a desired return for the company. The sad irony, diplomats in Dushanbe often point out, is that if it weren’t for Tajikistan’s breathtaking corruption, Dushanbe would probably have the resources to complete the dam.