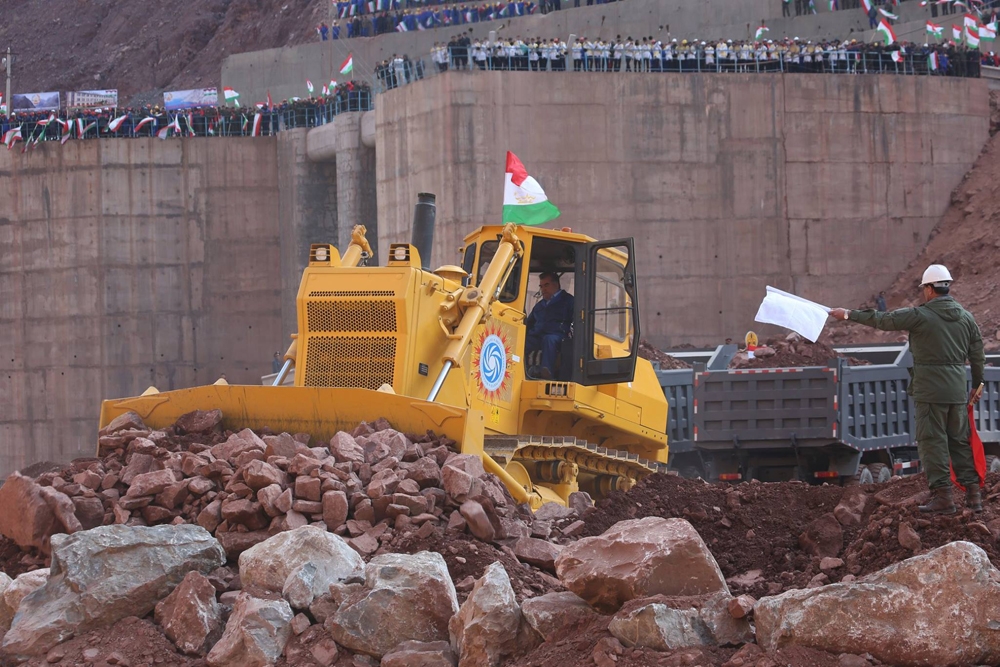 Demonstrating his hands-on management style, Tajikistan’s President Emomali Rahmon donned a hardhat in early November, clambered into a bulldozer and pushed rocks into the Vakhsh River to get work started on what is slated to become the world’s highest dam. (Photo: Tajikistani Presidential Press Service)

Demonstrating his hands-on management style, Tajikistan’s president donned a hardhat earlier this month, clambered into a bulldozer and pushed rocks into the Vakhsh River to get work started on what is slated to become the world’s highest dam.

The public relations exercise was intended to cast Emomali Rahmon as a practical man of action. But it also marked a major stride toward finally building the Rogun hydropower plant — a project that could, when completed, solve Tajikistan’s electricity shortage woes and turn the country into a net power exporter.

In the past, Rahmon’s actions would have quickly drawn an angry reaction from neighboring Uzbekistan, which lies downstream from the dam. But these days it is a different story. Instead of stamping their feet, officials in Tashkent are maintaining a studied silence, to many observers’ astonishment.

“I am amazed at how Tashkent is remaining so silent. The closure of the Vakhsh River is a threat to one of the main areas of our economy — the entire agricultural sector of Uzbekistan,” said Anvar Nazirov, a political analyst in Uzbekistan.

The change of temperature in relations is being attributed to the death of Uzbek president Islam Karimov and the ascendancy of Shavkat Mirziyoyev as the country’s interim leader. This equanimity marks a departure even for Mirziyoyev, however.

“Relations between the two countries seem to have improved, even though things are still opaque. When he was prime minister, Mirziyoyev was very vocal against the dam, and often engaged in a war of words with [former Tajik Prime Minister Akil] Akilov and Rahmon,” said Filippo Menga, a researcher at the University of Manchester.

Far from registering displeasure over the start of work on the Rogun hydropower dam project, Uzbekistan has signaled a desire to allow the resumption of direct flights between Tashkent and Dushanbe in 2017, ending a quarter-century-long aviation embargo. This came weeks after Uzbek Foreign Minister Abdulaziz Komilov visited Tajikistan to meet Rahmon on an apparent fence-mending mission.

At this stage, even if Uzbekistan wished to raise objections and persist with its previously intransigent position, the legal options available to Tashkent to stop the Rogun project are scant to non-existent.

“The fundamental basis of international law is that when a country does something, the reason should be reasonable and equitable, and there is an obligation not to cause significant harm,” Aaron Wolf, a professor of geography at Oregon State University, told EurasiaNet.org. “If you meet those two [conditions], there is very little a downstream country can do in any event … There is no water police or UN forces that can stop something.”

Upstream and downstream countries in Central Asia undertook tentative efforts in the early years of independence to coordinate on water usage, attempting to roughly follow rules that prevailed during the Soviet Union. Five-year plans devised by Soviet authorities in Moscow laid out how water should be shared among republics and which areas were to be privileged for irrigation. Basin Water Organizations were created to manage the allocation of water, but they only quite came together in the waning days of the Soviet regime.

Successor states agreed in 1992 on the formation of a body called the Interstate Commission for Water Coordination that was ostensibly intended to replicate the Soviet model. But this and a related initiative to try and mitigate the Aral Sea disaster made little headway in the face of divergent national interests. The chief hang-up was that water-rich but energy-resource-poor Tajikistan and Kyrgyzstan could no longer count on the provision of energy and power supplies from nations like Uzbekistan, thereby invalidating the symbiotic logic required for any water agreement to work.

The Rogun project has long remained on the drawing board. Uzbekistan’s traditional position on the dam has been that its construction would pose a risk to the sustainability of the country’s important agricultural sector, in particular cotton cultivation. Concerns have not dissipated. Farmers in the Ferghana Valley remain anxious about the start to work on the dam.

“Stemming the Vakhsh could lead to shortages of water not just in Uzbekistan, but also in Kazakhstan and Turkmenistan. They need to agree on how much water they are going to discharge. But the point is whose terms are they going to agree on. We farmers will see once spring comes around. If we don’t get enough water, we will have to reduce the size of the cotton crop,” said Meliboi Madaminov, a farmer in the Ferghana region who cultivates cotton, wheat and vegetables.

Wolf, the Oregon State professor, argued that zero-sum fears were unfounded. “If you look at sustainable development within a basin, dams upstream can make sense. They can lengthen growing seasons downstream [and] can bolster dry season flow. They can help, especially in a time of climate change, as we lose storage of snow — in a lot of basins you need to bolster storage,” he told EurasiaNet.org.

If Uzbekistan does eschew its customary aggression toward Rogun, it will have to start looking at how it proposes to make it work to its advantage.

“The series of questions I would be asking now is; what are the mechanisms by which Uzbekistan can ensure that their downstream needs are going to be met, and that has to do with negotiating an agreement for a flow regime. Maybe even helping to jointly manage, or jointly finance the dam,” Wolf said.

For its part, Tajikistan is being careful to avoid ruffling its neighbor’s feathers.

According to Salini Impregilo, the Italian contractor tasked with overseeing construction of the Rogun dam, the work being done so far should not impact water flows.

“The diversion of the Vakhsh River … will be done with confluence of two diversion tunnels in a mountainside in order to keep the foundations of the dam dry. It is a very complex task that, because of the strength of the river, will only be able to be done during the winter months when the mountains are covered in snow and the water level is lower,” the company said on its website.

And away from the public gaze, Tajik authorities have informally warned local media to refrain from any reporting on Rogun that has not been cleared by the state news agency. Sources in the government have told EurasiaNet.org this is to avoid the publication of any news that could sour the recent warming of relations with Uzbekistan.

But problematic technical decisions on how to progress with construction of Rogun — provided Tajikistan can find the large amounts of money needed to fund the work — will eventually have to be made.

“Tajikistan might decide to slowly fill the reservoir during the winter months with little consequence for Uzbekistan,” said Menga, the scholar at the University of Manchester. “However, the necessity to produce large amounts of hydroelectricity might lead Tajikistan to hurry things up, diverting more water from the Vakhsh River with consequences for downstream irrigation and potentially an exacerbation of the conflict.”