Tajikistan: Was Iran protest a fake?

A rehearsal for a protest organized a few days earlier raises suspicions the authorities are faking public discontent. 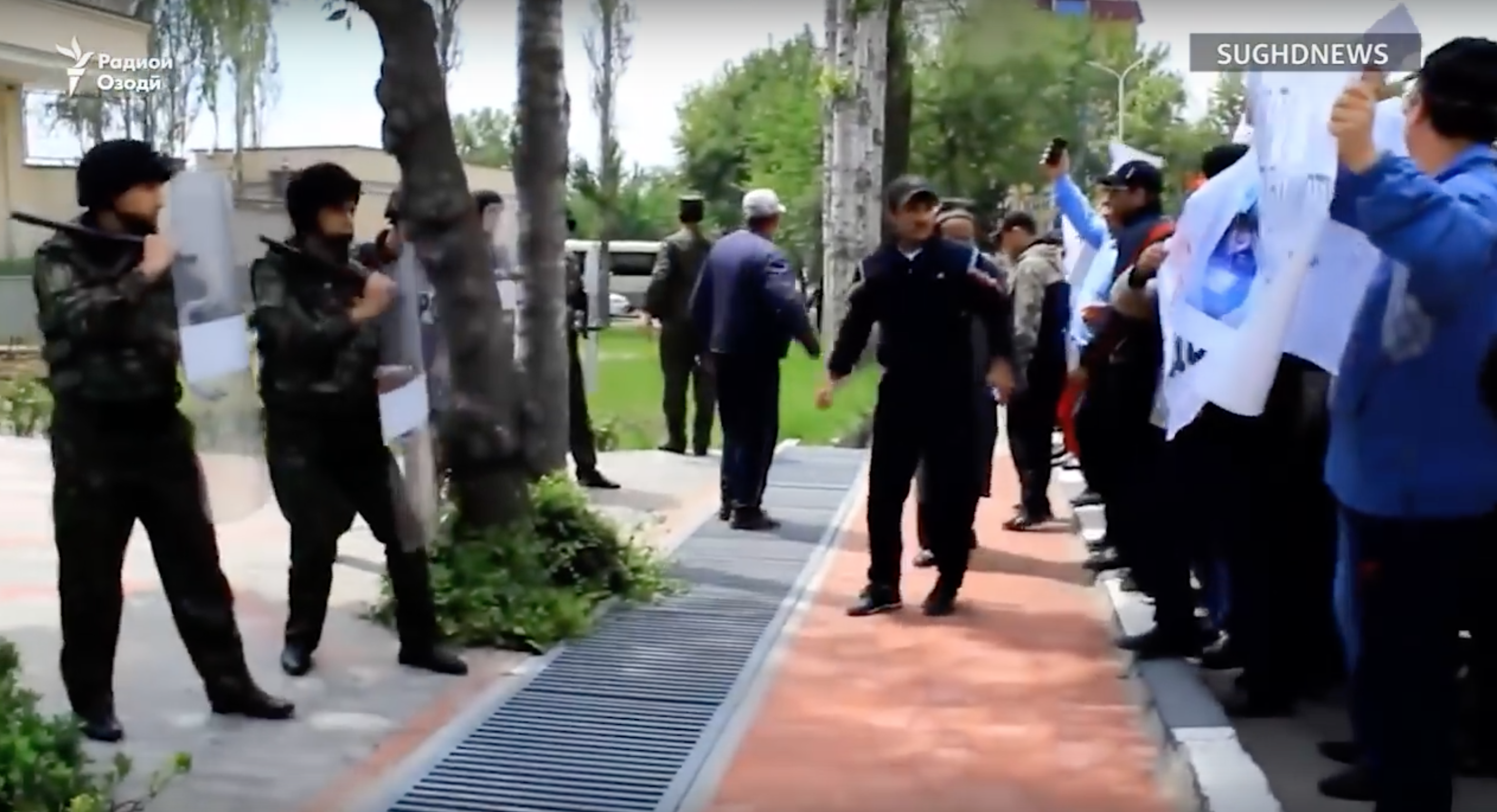 Screengrab of footage from the rally. (Photo: Radio Ozodi).

A protest rally that occurred in front of Iran’s embassy in Tajikistan this week was strange and unusual for a country where spontaneous public demonstrations can draw severe reprisals. So strange and unusual, in fact, that questions arise as to who precisely was behind it.

According to eyewitnesses cited by RFE/RL’s Tajik service, Radio Ozodi, several dozen people mustered on May 21 in front of the mission to shout slogans against the banned Islamic Renaissance Party of Tajikistan, or IRPT, which the authorities claim is backed by Iran.

“The protest was broken up because it had not been sanctioned,” one unnamed police official told Ozodi. “Police officers detained a few participants of this meeting. They were released after writing an explanatory note.”

Police seemingly volunteered no information about who had organized the rally.

Video footage shows some of the rally participants engaging in some very half-hearted shoving with a small smattering of riot police dispatched to oversee the situation. Some men dressed in sports gear at front of the demonstration appear to be directing the crowd.

Anti-Iranian rhetoric is once again de rigueur in Tajikistan. With Dushanbe seeking to curry favor with deep-pocketed potential sponsors in the Middle East — Saudi Arabia first and foremost — bashing Tehran is the default fallback position.

Speaking at a public meeting on May 12, for example, Tajik President Emomali Rahmon once again dusted off long-standing accusations that Iran had abetted the armed opposition during the civil war of the 1990s. At the same event, he claimed that the IRPT had adopted Shia Islam, implying that it was plotting in league with Iran to sow unrest in Tajikistan.

The implied chronology is that indignant members of the public, upon hearing such remarks, made posters and picketed Iran’s diplomatic mission.

But there is an odd kink to the story that cannot but provoke some skepticism.

Late in the evening on May 13, residents of central Dushanbe heard the rare sounds of baying crowds and rushing police sirens. Rumors quickly spread on social media that some kind of unrest had broken out downtown.

It was only the following day that amateur footage surfaced of what appeared to be a training exercise in crowd control. Officials have not publicly commented on what exactly was taking place, but it is quite clear the rally was not genuine.

The demonstration in front of the Iranian embassy now throws up the compelling suspicion that the crowd-control exercise may not have been a rehearsal for the benefit of the riot police, but for the protesters themselves.