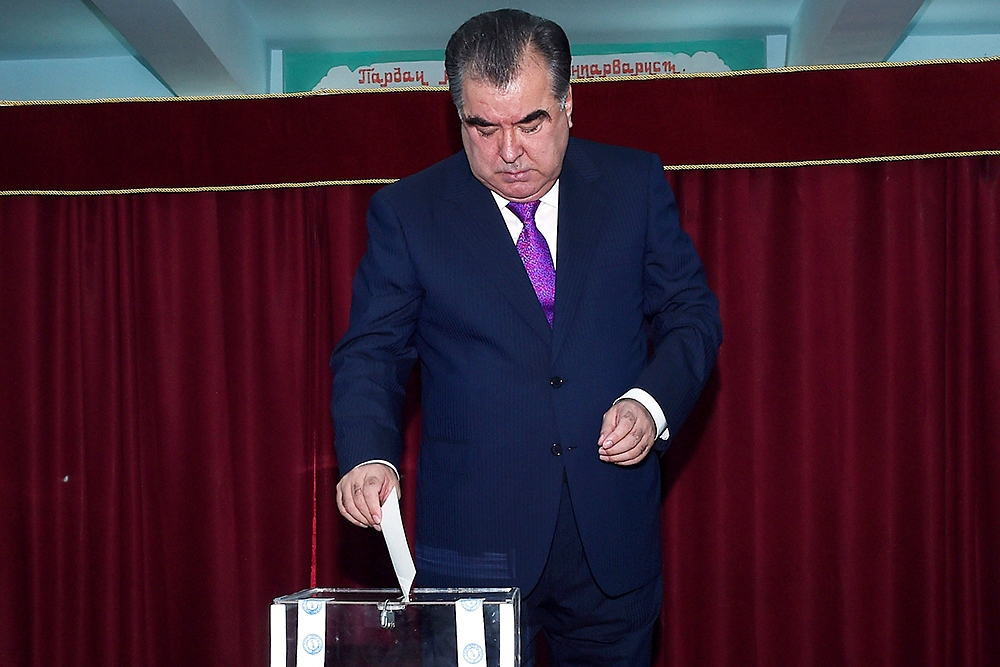 The ballot in Tajikistan’s weekend referendum was childlike in its simplicity. It comprised one plainly formulated question: Do you support changes to the constitution? Yes or no.

Preliminary official figures show that 94.5 percent of those participating in the May 22 referendum approved the scrapping of term limits for President Emomali Rahmon. The plebiscite also ratified 40 other constitutional amendments.

Pre-vote information campaigns did little to inform people about what it is they were casting their ballot for. “There has been limited voter education or information provided for the referendum. State television has aired short infomercials advertising the vote, and some billboards can be found announcing the election date,” International Foundation for Electoral Systems, or IFES, said in a briefing note published last week. “There has been little in the way of public debates on the merits of the proposed changes.”

It was no surprise then that voters coming out polling stations were unable to speak in anything more than generalities about the constitutional reforms. A need for stability — a notion that features heavily in the state’s rhetoric — was on many people’s lips.

In a speech ahead of the vote, Mahmadsaid Ubaidolloyev, the mayor of Dushanbe and the speaker of the upper house of parliament, said the constitutional changes could spur development and strengthen Tajikistan’s statehood.

Many of the constitutional amendments were formal in nature, relating to trifling substitutions of wording. But with attention focusing mainly on Rahmon’s legal entitlement to hold on to power indefinitely, other worrisome provisions tended to be overlooked.

One much-discussed constitutional amendment lowered the age at which candidates can stand for president to 30, from the current 35. That would allow Rahmon’s son and presumptive heir, Rustam Emomali, to stand at the next presidential vote, scheduled for 2020. Emomali, who will be 33 when that election is due to happen, has been carefully nurtured over the past few years in government positions of ever-increasing importance.

A man in his 20s hanging out with friends in Dushanbe Botanical Gardens on referendum day offered a cynical assessment. “It’s all being done for Rustam, isn’t it?” he said, asking that he not be identified out of fear he could be expelled from university.

The minimum age requirement for candidates for parliament, and positions in the constitutional court, has also been lowered to 30 from 35.

Another worrisome amendment bans religious-based parties — a transparent attempt to quash any potential resurrection of the Islamic Renaissance Party of Tajikistan (IRPT), which has been systematically liquidated over the past year.

A constitutional article allowing religious-based parties dated back to 1999, and was the product of the agreement that brought an end to a grueling civil war in the mid-1990s. All aspects of that peace deal have long been shredded in spirit, but the May 22 amendment officially enshrines its dissolution.

The constitutional changes will also impact local organizations that receive funding from abroad. One approved amendment restricts foreign funding for political parties or organizations — a change that looks intended to strangle whatever remains of non-government-sanctioned civil society.

“The notion of what constitutes a ‘political’ organization [will] be open to broad interpretation, though [it] effectively erects restrictions on domestic human rights monitoring groups or civil society organizations monitoring government performance. The proposed measure is akin to the ‘foreign agents’ laws adopted in the Russian Federation and elsewhere,” IFES said in its note.

The Organization for Security and Cooperation in Europe, which runs the most internationally respected vote-monitoring body, kept a wide berth of the referendum.

The United States mission to the OSCE, meanwhile, expressed worry about the potential ramifications of the constitutional reforms. “We are … concerned about the negative effect that some of the proposed constitutional amendments may have on democratic development in Tajikistan. Two of these concern elections and have the potential to further restrict citizens’ genuine choice in the democratic process,” said Daniel Baer, the US Ambassador to the OSCE.

Observers from the Shanghai Cooperation Organization and the Commonwealth of Independent States (CIS), two groups that have a long-established tradition of giving clean bills of health to elections in deeply authoritarian nations, lauded the conduct of the Tajik referendum.

“The CIS observation mission believes that the referendum that took place in Tajikistan on Sunday on changes to the constitution was fully in conformity to national laws and international norms,” CIS monitoring mission chief Vladimir Garkun said on May 23.

Local monitors were thin on the ground and comprised at many polling stations only representatives from the ruling National Democratic Party of Tajikistan.

Authorities are casting Sunday’s referendum as a success and are claiming a 92 percent turnout, with more than 4 million people participating. Even though the state typically resorts to various methods of marshaling large sections of the population — from government workers to students — into taking part in such votes, activity was notably lackluster at many polling stations in the capital, Dushanbe, as compared, for example, to the parliamentary elections in 2015.

TajInfo, a foreign-based opposition website, cited a source on the election commission as saying the real turnout figure might have been as low as 20 percent. “[The source] said that all local leaders and heads of election commission were given instructions to quietly hide the real number of voters,” the TajInfo report claimed.