Tajikistan: What is going on in the Pamirs?

The region has a storied past of resistance to Dushanbe, most recently during bloody clashes in 2012. 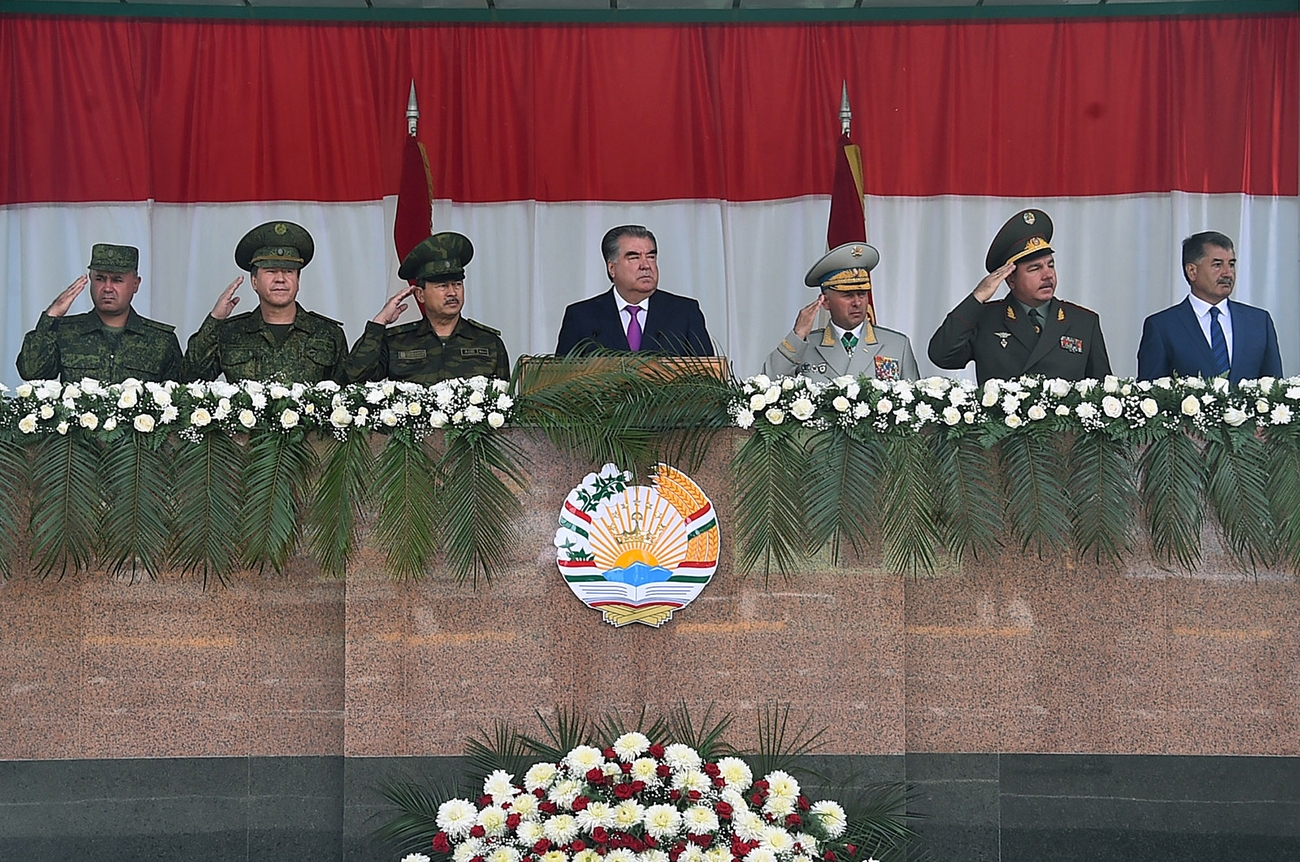 President Rahmon inaugurated a border guard training center in Khorog last week. After touring the new facilities, he attended a military parade including many troops brought in from other regions. (Tajikistan Presidential Press Service)

For around a week, reports have been trickling out of Tajikistan’s remote eastern Pamir region of a looming security crackdown by government forces.

The first public hints that not all was well emerged on September 15, when President Emomali Rahmon stated during a visit to Khorog, the capital of the mountainous Gorno-Badakhshan Autonomous Region, or GBAO, that he was growing fed up with lawlessness in the province. Addressing leading public figures in GBAO and top national security officials, Rahmon delivered a furious tirade and set a one-month deadline by which to resolve outstanding issues.

“There are 2,000 government employees in Khorog, and you cannot even deal with five or six criminals? I will take responsibility for this myself – if you need, use live arms,” Rahmon told an ashen-faced row of security chiefs in televised remarks. 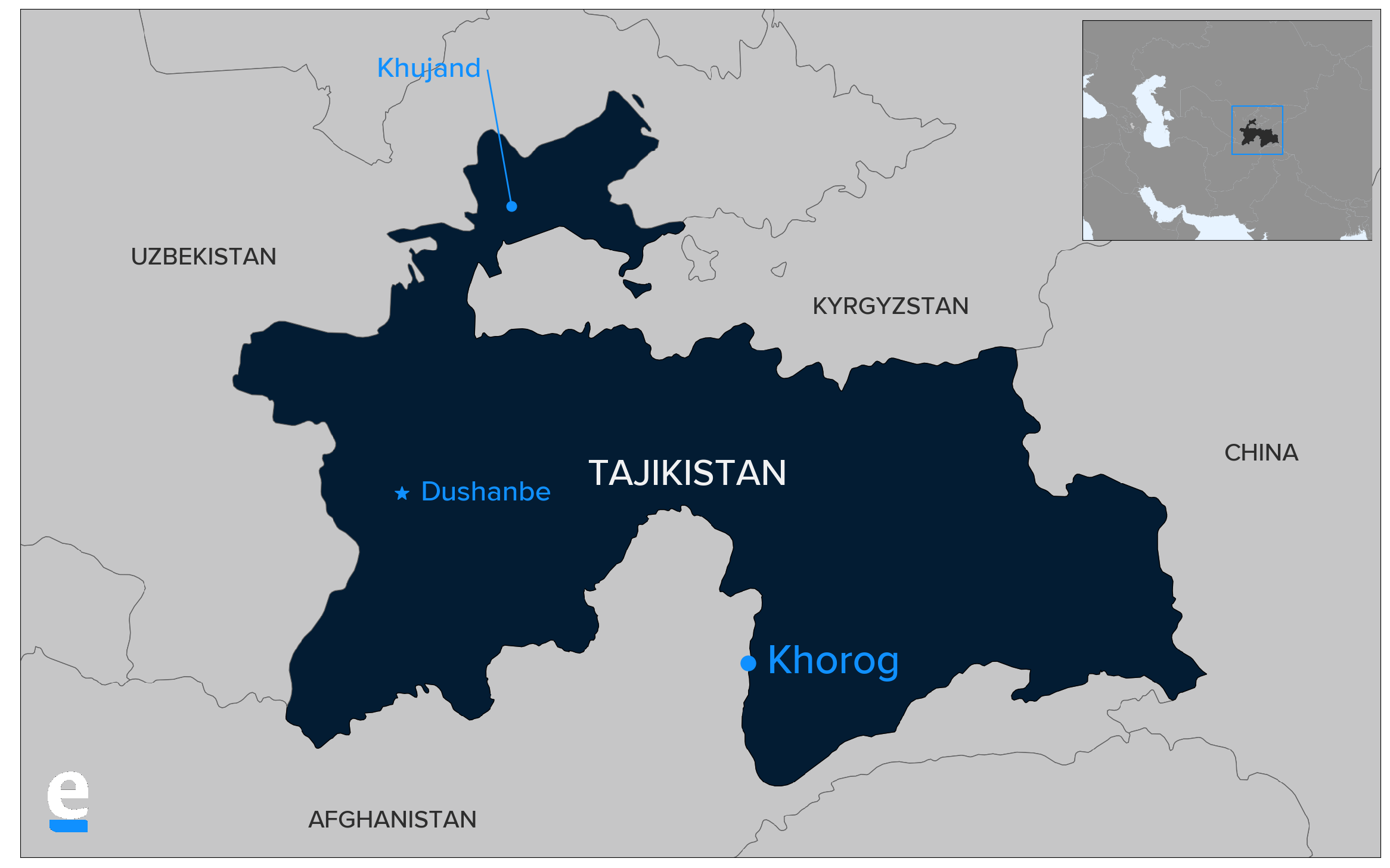 GBAO has a storied past of resistance against Dushanbe, most notably in the years of the civil war of the 1990s, but more recently during bloody clashes in 2012 that sowed a sense of abiding distrust and ill-will that endures to this day. The total size of the population stands around 200,000, although by territory, GBAO accounts for just under half the whole country.

The specific source of unhappiness for Dushanbe, as in 2012, is the role said to be played by local informal leaders – the “five or six criminals” alluded to by Rahmon – whose authority is believed to often outweigh even that of the government. Officials have let the central leadership down by playing a “double game” and dealing directly with these figures while assuring the government in Dushanbe that the situation was under control, Rahmon claimed. By most accounts, these informal leaders are engaged in an array of illegal practices, including smuggling, but they nonetheless enjoy considerable local support; indeed, they are often seen as protection from the central government.

A series of high-level personnel reshuffles were carried out following Rahmon’s angry speech. GBAO governor Shodihon Jamshedov appointed three new deputies and a head of the regional court. The man appointed first deputy governor was Alisher Mirzonabotov, who had been deputy head of the regional branch of the State Committee for National Security, or GKNB, since last September. Also, an outgoing deputy Interior Minister has been made head of police for GBAO. Khorog mayor Arambegim Mahtobshozoda, who had been in his post for two years, was fired on September 19.

There are clues that what is happening is both a long-term bolstering of central government forces in GBAO and a possible preparation for unrest in the immediate future.

On September 14, Rahmon officially inaugurated a GKNB border guard training center in Khorog. The garrison can accommodate up to 480 people. He also opened a new building for the military prosecutor’s office and laid the foundation stone for living quarters for military officers.

A newly commissioned border guard recruits training center in Khorog can accommodate 800 troops. Training there will focus, among other things, on the use of electronic equipment.

The account laying out all these details, as compiled by the president’s official website, was to convey the sheer volume of resources being devoted to the security presence being installed in GBAO. This even included a reminder that the canteen for border troops could accommodate 500 people and that troops were provided three square meals daily.

After touring the new facilities, Rahmon attended a military parade involving 3,500 troops, including many brought in from other regions.

“Those forces that are here now, let them stay. May they enforce order, and then they can leave,” Rahmon said, setting October 15 as a deadline for bringing the region to heel.

The most immediate visible result of this demand for enhanced security has seen police ordering drivers in GBAO to remove tinted films off the windows of their cars. Local residents have also reported that police have been appealing to owners of light weapons to hand them over to the authorities. It is not known that anybody has acquiesced to these requests.

On September 19, footage surfaced online purporting to show troops and military equipment being transferred to GBAO. It is not known when the footage was filmed and it is possible that it was dated to before the military parade.

A military source told Asia-Plus newspaper on September 19 that there are no plans to dispatch additional troops to GBAO as part of measures to implement Rahmon’s demands. The current security presence will be sufficient, the source said.

The genesis of this situation dates back to 2012, when government troops engaged in bitter battles against armed groups loyal to local power brokers. Accounts of that episode are mired in uncertainty as the government does not tolerate unfettered reporting by media or rights groups in the area, but a credible account describes its origins in the killing that July of provincial GKNB chief Abdullo Nazarov. That murder was pinned on associates of Tolib Ayombekov, one of the informal leaders almost certainly being referred to by Rahmon.

Within days, government forces launched an assault on the bastions of the informal leaders, who were also said to include Imomnazar Imomnazarov, who was killed in a blast at his house the following month, and Mamadbokir Mamadbokirov in their ranks.

A lengthy gun battle ended in a stalemate that compelled the government to agree to grant security guarantees to anybody that handed over their weapons.

Crucially, those negotiations were brokered by representatives of the Agha Khan, the wealthy Europe-based philanthropist deemed by the Shia Ismailis of the Pamirs to be a spiritual leader. It is clear that the face-reddening climbdown has rankled with Dushanbe ever since and that Rahmon’s remarks indicate he intends sooner rather than later to finish off the job.

Analysts have long been predicting a potential resurgence of unrest. In a report published in March, the International Crisis Group warned that GBAO’s informal leaders, which it said are known locally as the Authorities, are well prepared for such an likelihood.

“If clashes erupt, the Authorities can muster dozens of unemployed youth from Khorog and its environs, in addition to their regular gunmen,” the report said.

The timing for this potential renewed attempt by the government to consolidate power is explained by a couple of factors.

One theory is that Dushanbe is incensed by genuine cases of brazenness among the informal leaders. RFE/RL’s Tajik service, Radio Ozodi, reported on September 19 that Ayombekov was forced to deny claims he physically assaulted the GBAO governor, Jamshedov.

“There was no slap. We went to the head of the region to discuss the situation with prisoners. In the pretrial jail they beat up our guys, our relatives. We just demanded that the authorities take measures and monitor how people are being detained,” Ayombekov told Radio Ozodi.

The other line of reasoning, advanced in the ICG report, is that Rahmon is bent on extending his control over the whole nation in advance of a possible transition at the top in 2020.

“Rahmon is expected to hand over power to a younger family member. A rocky transition could lead Gorno-Badakhshan powerbrokers to seek a more influential role in the new dispensation. Their track record suggests they may be willing to use force to achieve their ends,” the ICG report noted.