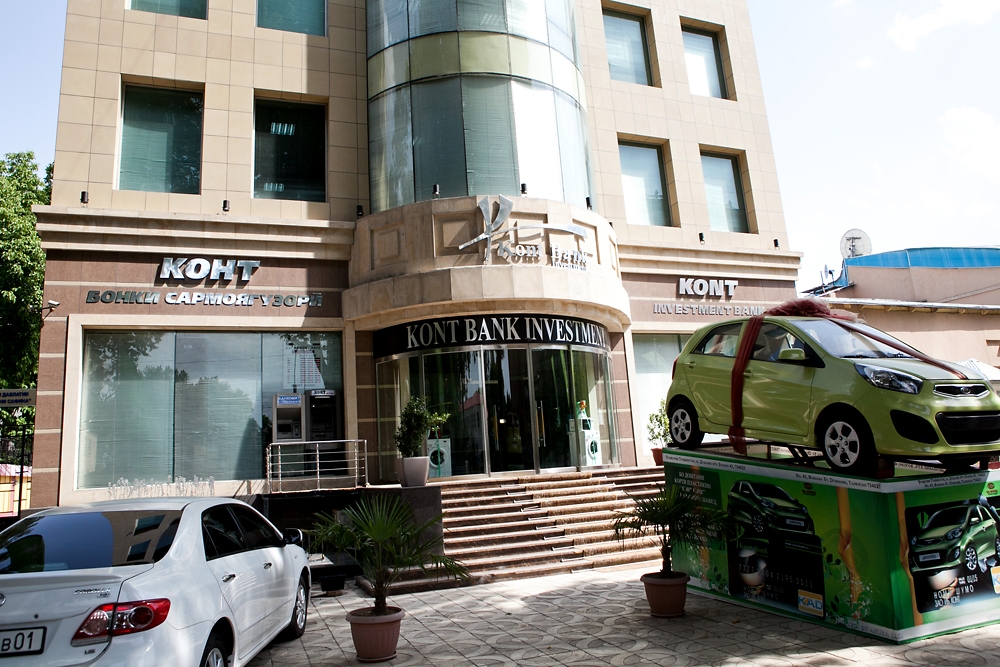 The Kont Investment Bank is one of several companies owned by an Iranian businessman targeted by the US Treasury Department. (Photo: David Trilling)

An Iranian entrepreneur who is the subject of US and EU sanctions for laundering oil money on behalf of Tehran is operating a successful family of businesses in Tajikistan.

Babak Zanjani’s Tajik empire includes a bank, an airline, a taxi service and a bus terminal that President Imomali Rahmon himself helped inaugurate in March.That cushy relationship, in a country where foreign businessmen say it is impossible to survive without top-level political connections, has coincided this year with increased international scrutiny of Tajikistan’s lax attitude toward money laundering.

Beyond Tajikistan, Zanjani’s business interests are sprawling. On its website, the Dubai-based Sorinet Group, which describes Zanjani as its chairman, lists at least two dozen companies engaging in construction, cosmetics, hospitality, transport, and oil and gas extraction. The site also lists the Asia Express Terminal in Dushanbe as one of its subsidiaries. A photo on the site shows Zanjani with Rahmon and Dushanbe mayor Mahmadsaid Ubaydulloyev admiring a model of the terminal.

It appears that Rahmon has embraced the head of a group of companies and financial institutions the US Treasury Department says “have been used by the Iranian government to finance its sales of oil around the world.” In April, the Treasury Department targeted Zanjani and a Malaysian bank under his control, along with “an international network of front companies” including Sorinet Commercial Trust. US officials believe the Zanjani-connected entities are “moving billions of dollars on behalf of the Iranian regime, including tens of millions of dollars to an Islamic Revolutionary Guards Corps (IRGC) company.” The Treasury Department is also targeting his Kont Investment Bank, based at 43 Bukhara Street in Dushanbe.

Last December the European Union sanctioned Zanjani for being “a key facilitator for Iranian oil deals and transferring oil-related money. Zanjani owns and operates the UAE-based Sorinet Group, and some of its companies are used by Zanjani to channel oil-related payments.”

EurasiaNet.org tried to reach Zanjani to give him a chance to explain his activities. His office in Dubai refused to connect us. But he told the Reuters news agency shortly after the European sanctions were announced that he does not do business with the Iranian government. He suggested that EU regulators were mistaken in their assumption that he was engaging in illicit activity.

BBC Persian reported in March that Zanjani has strong ties with senior Iranian officials and appeared in an unofficial video on a private plane with a senior Iranian security officer involved in the violent crackdown on demonstrators following contested elections in 2009.

Few in Tajikistan seem to know much about Zanjani. Last month, the head of Tajikistan’s National Bank, Abdujabbor Shirinov, said he had never heard of Zanjani or the US embargo on Kont Investment Bank, the Ozodagon news agency quoted Shirinov as saying on July 23.

Nevertheless, senior Western officials are concerned about Zanjani’s relationship with Tajikistan’s leadership and worry that Dushanbe is serving as a money-laundering hub. “Zanjani’s been embraced by the president. The president even opened the bus station, which is unheard of. It’s too cozy a relationship. We believe he’s using Tajikistan to launder Iranian oil money,” said one senior Western official.

Tajikistan enjoys strong cultural and linguistic ties with Iran – the Tajik language is a close cousin of Persian – leading to relatively high levels of Iranian investment for the region. Moreover, because vast quantities of Afghan heroin are said to transit through Tajikistan each year, analysts believe illicit money is sloshing around Dushanbe.

In June, the Basil Institute on Governance ranked Tajikistan the country fourth most-vulnerable to money laundering and terrorist financing of 149 countries in its second-annual Basel Anti-Money Laundering (AML) Index.

A few days after the Basil Institute index was released, and only five days ahead of an international meeting on money laundering in Oslo that Tajik officials were due to attend, Rahmon called an extraordinary session of parliament and pushed through new legislation that sets criminal penalties for money laundering. The Asia-Plus news agency noted that lawmakers did not discuss the legislation.  As in many of the post-Soviet republics, Tajikistan often passes legislation that is vaguely worded and poorly enforced.

While foreign diplomats welcomed the move in principle, the senior Western official told EurasiaNet.org the legislation was only "window dressing" to give Tajik officials something to boast about at the Oslo inter-governmental Financial Action Task Force (FATF) meeting.  Earlier in 2013, FATF criticized Tajikistan for having some of the weakest anti-money laundering legislation in the world.

In a small economy like Tajikistan’s, a business empire like Zanjani’s can be hard to avoid, even if US sanctions prohibit “transactions between the designees and any US person.”

A number of Westerners in Dushanbe said their embassies, including the US Embassy, recommend Zanjani’s taxi service, Asia Express, because it is prompt, reliable, and, unlike the few other local companies (most taxis are private cars), offers receipts.

The US Embassy – which rights advocates and some diplomats have accused of avoiding criticism of the Rahmon administration for fear of losing his support as NATO withdraws from neighboring Afghanistan – did not respond to a request for comment.