Tajikistan: Why go to Paris when you can go to Kulob?

Talco paid for the park, but it is taxpayers ultimately footing the bill. 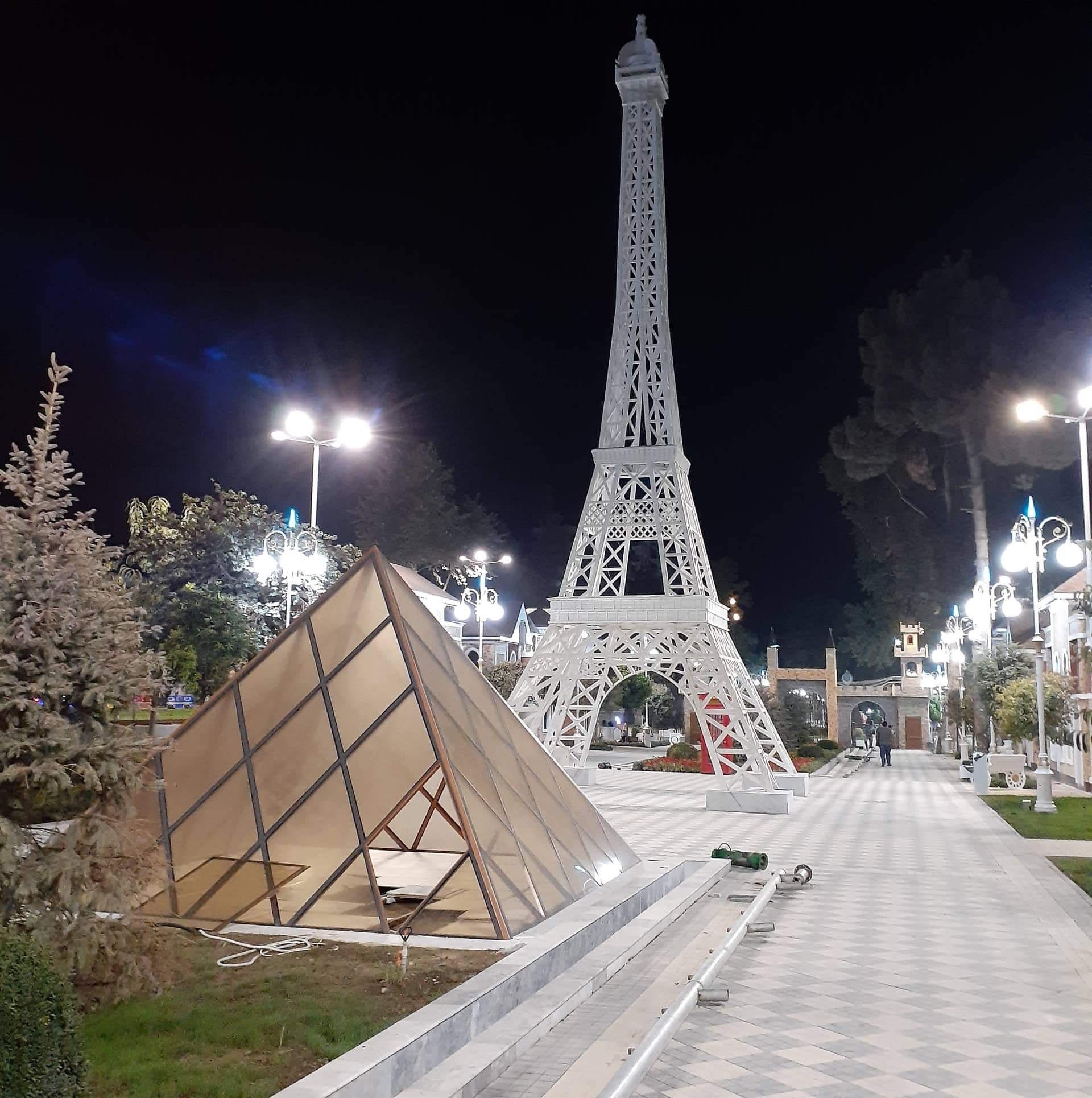 Just like the real thing: A model of the Eiffel Tower in Kulob. (Photo: Eurasianet)

A major industrial concern in Tajikistan has spent millions on dropping a slice of Parisian charm into the southern city of Kulob.

The newly completed French-themed park has a miniature Eiffel Tower and beside it a replica of the Louvre Pyramid. Something with a very passing resemblance to a country tavern is emblazoned with the words Tour De France.

A traditional British red telephone booth does slightly wreck the effect, however.

The ribbon on this novelty attraction is to be cut by President Emomali Rahmon on September 10 – one day after independence celebrations.

The $4 million bill was partly picked up by Talco, an aluminum manufacturer notionally swamped by debt. But local authorities compelled owners of cafes and shops in the already-existing park to remodel their premises in keeping with the Parisian theme at their own cost.

But can Talco, which is widely understood to be owned by Hasan Asadullozoda, the brother of Rahmon’s wife, truly afford such frivolities?

In 2016, the first and last year in which the Finance Ministry would publish details about the state of Talco’s finances, the company was shown to be in 2.5 billion somoni ($318 million) in debt.

Talco’s main creditors are the tax service and state-owned electricity utility company Barki Tojik.  Around half a million dollars is owed to CDH Investments, a British Virgin Islands-registered company also controlled by Asadullozoda.

But no fear, Barki Tojik has over the years written off more than $60 million worth of bills owed by Talco. The liabilities were instead picked up by the Tajik government.

This is not to say that Talco is in much trouble. The appearance of financial woes is quite illusory. Most of the money generated by the Talco plant is accrued by offshore-based tolling partners. The Tajikistan part of the operation sells its goods at reduced prices, thereby usefully avoiding onerous taxes and duties.

The Tajik taxpayer subsidizes Talco in other ways.

Talco’s facilities are estimated to consume around 30 percent of the electricity that Tajikistan produces. When it pays for that power, it does so at reduced commercial rates. Households pay 22.7 dirham ($0.02) per kilowatt hour, but Talco is charged 7.2 dirham for the same amount.

Despite these preferential terms, Talco has experienced rough times. In 2007, it had a bonanza year, turning out 419,000 tons of raw aluminum. But output has plunged heavily ever since. By 2018, annual production had fallen to around 100,000 tons.

Residents of Kulob have greeted their mini-Paris with characteristically resigned cynicism.

One commenter on the My Kulob online discussion group who signed off under the name Joni Safarzoda wrote: “Why would we need factories? When we run out of money, we can just steal the metal [from the Eiffel Tower] and sell it.”

Another visitor to the site, Nurullo Sadizoda, tried to see the bright side: “You want to see Paris, now all you need to do is go to Kulob. It is a cheaper way to take a photo by the Eiffel Tower.”