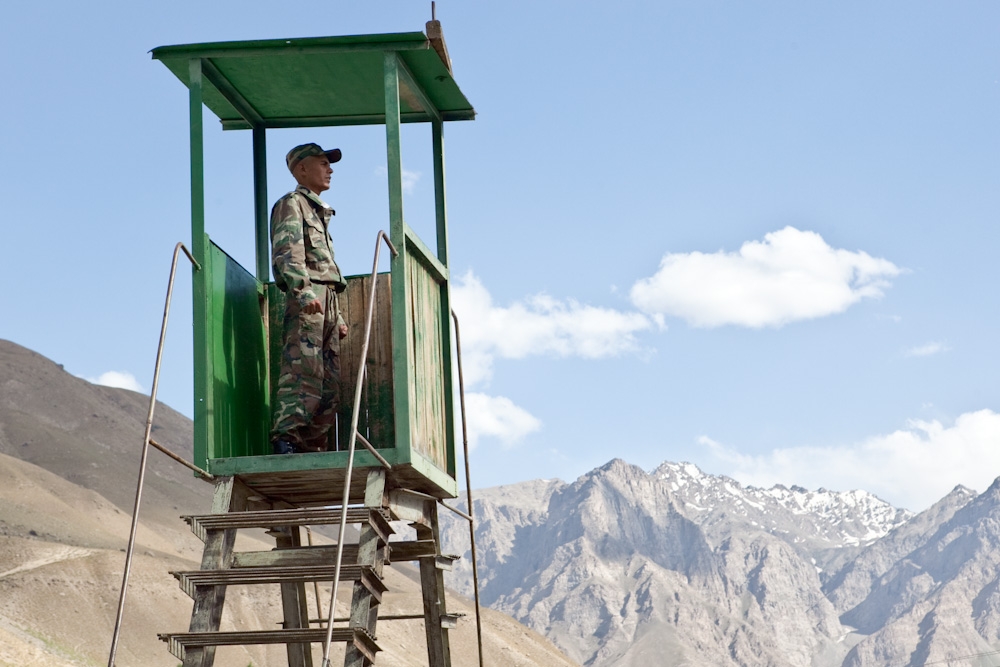 A Tajik soldier watches the Afghan border from a post in Khorog. The town in Tajikistan's Gorno-Badakhshan province, scene of fierce fighting between government forces and local warlords in recent days, is a major trafficking hub for Afghan narcotics. (Photo: David Trilling)

Reports of civilian casualties trickled out of Tajikistan’s mountainous east on July 25 as security officials announced a ceasefire and demanded militants hand over the local warlord targeted in the offensive, launched a day earlier. The fighting in Gorno-Badakhshan province (GBAO) is being described as the worst in Tajikistan since the 1990s civil war and raises concerns of a protracted new conflict.

According to the Interior Ministry and National Security Committee, 42 died during the operation on July 24, including 12 government soldiers and 30 militants. Though the government denies any civilian deaths, reports of such fatalities have been widespread. Radio Free Europe’s Tajik service says unidentified snipers killed at least six civilians, including children, early on July 25. The independent Asia-Plus news agency, which has been blocked throughout Tajikistan, reports approximately 20 civilians died. Unconfirmed reports put the civilian death toll as high as 100.

With the region still cut off from telephone and Internet, numbers are impossible to verify. Some Dushanbe residents unable to reach their loved ones in GBAO are panicking.

One of the few residents able to get through on a special line said he heard reports of children killed in the neighborhood of Khlebzavod (“Bread Factory”). “My son told me, ‘Daddy, it is so terrible to hear the real whistle of bullets,’” said the resident.

The military operation began after the government accused Tolib Ayombekov, the chief of a major border post near GBAO’s capital, Khorog, of arranging the July 21 murder of General Abdullo Nazarov, the provincial head of Tajikistan’s KGB-successor agency. Authorities also accuse Ayombekov, a former civil war-era commander, of organizing an illegal armed gang and drug smuggling. Some unconfirmed reports say he has fled to Afghanistan, directly across the Pyanj River from Khorog. A July 25 amnesty announced by the government does not apply to Ayombekov or three other militants wanted for the murder, according to Reuters and other reports.

The operation risks disenfranchising local Pamiris, a cultural and linguistic minority in Tajikistan that comprises the bulk of the population in high-altitude Gorno-Badakhshan. The sparsely populated region, which shares a long border with Afghanistan and is central to the Afghan narcotics trade, has long resisted the authority of President Emomali Rakhmon. Most residents sided with the opposition during Tajikistan’s 1990s civil war. Locals still complain of underrepresentation in government positions. The region remains the poorest in the country, itself the poorest in the former Soviet Union.

There were scattered reports of protests in Khorog on July 24 and 25, and outside Tajik embassies in Moscow and Bishkek. And on the night of July 24, a group of unidentified assailants beat Tajikistan's military prosecutor who was in Khorog as head of the task force investigating Nazarov's killing, Asia-Plus reported.

Analysts in Dushanbe believe the government’s ability to temper any anger in the Pamir Mountains, where GBAO is located, will depend on the number of civilian casualties.

“Given the type of battle that took place, it’s reasonable to assume civilians were killed. If there are many civilian casualties, than the government has a nightmare scenario on its hands. If there ever was a separatist movement in GBAO, this will be a big problem. The big question is how many civilian casualties there are,” said a well-informed analyst in Dushanbe. (The local government in GBAO has announced a 20-person commission will investigate civilian deaths, Asia-Plus reported.)

The analyst, who spoke on condition of anonymity due to fears of government reprisal, doubts the violence could spill into other parts of the country, as the Pamiris have few natural allies.

While sources in Tajikistan have been wary of going on the record, one strongly held view is that Dushanbe had been planning an operation to eliminate four to eight militant groups in GBAO, most of which are believed to be involved in drug trafficking. Since the civil war ended in 1997, President Rakhmon has steadily pushed out opposition commanders who received positions in the UN-brokered peace agreement, but he has not confronted commanders in GBAO so directly until now.

Speculation is rife that the operation is first and foremost political, to cement control in a mildly autonomous region, but also to increase leverage over the drug trade. Western diplomats have long accused senior officials throughout Tajikistan of involvement in heroin trafficking. Roughly 25 percent of Afghan narcotics pass through Central Asia each year, the majority through Tajikistan, according to the UN Office on Drugs and Crime. One of the major trafficking routes goes straight through Khorog.

“The primary goal of the operation is political – to get rid of armed opponents. But the second is to consolidate the drug trade,” said the analyst in Dushanbe.

Officials said 40 militants have been arrested, including eight Afghans. While some Russian media quickly drew links between the militants and the Taliban, it is questionable whether the Taliban, strict Sunni Muslims, would team up with Ismailis, whom they consider heretics.