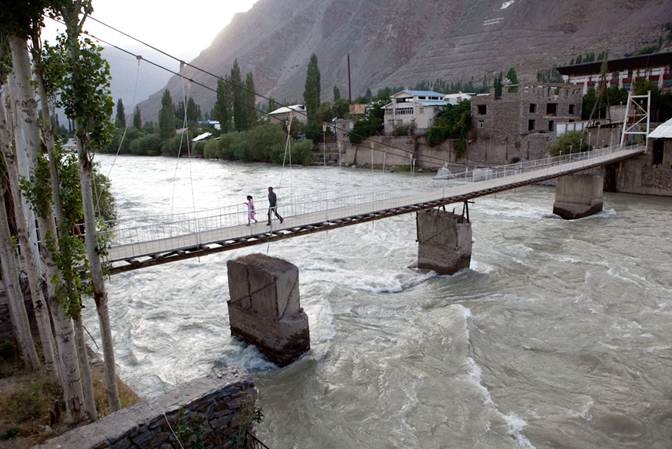 Khorog residents cross the Gunt River, which splices through the capital of Gorno-Badakhshan province, in happier days. (Photo: David Trilling)

Dennis Ryll, a retired doctor from Las Vegas, was looking to take an exotic vacation, but adventure-seeking turned scary when he found himself caught in the middle of a firefight between government forces and local armed groups in Tajikistan’s restive region of Gorno-Badakhshan.

As he was evacuating Khorog, he looked up at the hills and saw government snipers taking up positions. It crossed his mind that “there is always the possibility someone is [mad] and you just happen to be the guy standing there [in the crosshairs]."

Ryll was part of a contingent of 30 cyclists making a trans-Asia ride from Shanghai to Istanbul. The group was pausing July 24 in Khorog when government security forces launched an all-out assault against armed units loyal to a local warlord, Tolib Ayombekov. The cyclists were pinned down in hotels for three days before being evacuated, along with other foreigners in the area, to the Tajik capital Dushanbe. Despite encountering life-threatening danger, Ryll said he was planning to keep on cycling, making the next leg of the trip from Dushanbe into Uzbekistan.

“I really wanted to see Central Asia,” said Ryll, “but I ended up in a combat zone.”

Back in Khorog, some armed Ayombekov loyalists have begun handing in their weapons in exchange for an amnesty, EurasiaNet.org sources confirmed. On July 30, officials said that they would only seek to prosecute three people, including Ayombekov, whom authorities charge with organizing the murder of a KGB general on July 21.

A senior Western diplomat familiar with both parties to the negotiations confirmed that disarmament has begun, and said the other two most-wanted rebels – Yodgor Mamadaslamov and Imomnazar Imomnazarov – are engaged in talks with government representatives.

“The process is very delicate, but I think it is heading in the right direction,” the diplomat said. “One of [the rebels’] anxieties is that the law won’t apply to them in a transparent way. That’s what they are asking for. If they were to walk in without a prior agreement, perhaps their lives would be in danger. That is what they are now negotiating.”

Another witness to the Khorog fighting, an expatriate researcher who lives in the town and wished to remain anonymous so he can continue his work there, described panic at a “totally unexpected” government assault. “No one knew what to do.”

During a tenuous ceasefire on July 25, after the initial assault, locals walked the streets hoping to account for family and friends. Turning over the bodies of dead government soldiers, they made a chilling discovery: The majority of the soldiers were Pamiris, as members of the minority living in the Pamir Mountains are known. “The government had used Pamiri soldiers against Pamiris. It was really underhanded and increased tensions a lot,” said the expatriate.

Stories of civilians being shot by snipers just for walking to the bathroom began to surface, further deepening the divide between the Pamiris and majority Tajiks.

“The government has never given us a lot of support,” said one young Pamiri who now lives in Dushanbe but still has family in Gorno-Badakhshan. “It’s the warlords who gave us support.”

Some reports say Ayombekov was injured in the initial round of fighting, others suggest he fled to Afghanistan. In a July 28 statement credited to him, Ayombekov maintained his innocence and described the military assault as "genocide against the Pamiri people." With a profile that reads like a Western wanted poster, the former opposition commander-cum-border guard boss is accused of banditry, criminal connections with Afghanistan and the smuggling of tobacco products, precious stones, weapons, alcohol and heroin.

“It was likely a business deal gone wrong,” said a second senior Western diplomatic source in Dushanbe, referring to the chain of events that prompted the Khorog assault. The diplomat spoke on condition of anonymity, according to protocol. “It’s all mixed up with drugs and smuggling and is very murky.”

Belying the official story that Ayombekov was only targeted after arranging the KGB general’s murder, the diplomat said there had been government troops amassing in Khorog over the past few weeks. The killing just acted as a catalyst for government action in a region the president sees as growing increasingly lawless, he said, but the heavy-handed tactics could backfire. “It’s ironic that for years the president has been saying a return to civil war is the nightmare scenario, because this attack may well escalate,” he said.

“The president is likely embarrassed at having gotten this so spectacularly wrong,” the diplomat added. “The longer term price is difficult to determine, but there is clear discontent here at the overreaction of the authorities.”

Officials now say 17 government soldiers, 30 suspected criminals and one civilian died in the conflict, though there have been reports of dozens more killed, including women and children. With the road closed and no humanitarian aid getting in, there is rising concern over food shortages and hospital supplies, the director of Tajikistan’s International Committee of the Red Cross mission, Severine Chappaz, told EurasiaNet.org.

On July 30, one of Tajikistan’s most prominent clerics, Hoji Akbar Turajonzoda, condemned the military operation, calling it an “act of intimidation” that could harden Pamiri attitudes against the government. “We speak a lot about peace and accord, but it is impossible to reestablish unity by such methods,” Asia-Plus quoted him as saying.

Further aggravating tensions, the country’s leading opposition movement, the Islamic Renaissance Party, says its local representative, 32-year-old Sabzali Mahmadrizoev, was murdered shortly after being detained for speaking at a protest rally in Khorog on July 23. His body was found three days later near an army base outside the town.

Stories like that might explain why the government is still so intent on controlling information coming from the region. The leading independent news agency, Asia-Plus, remains blocked inside Tajikistan, along with YouTube. On July 30, the BBC was blocked. Troops in Khorog have confiscated satellite phones, the expat resident there said. And Asia-Plus reports that soldiers in Dushanbe airport deleted some photos and videos on evacuated tourists’ cameras.