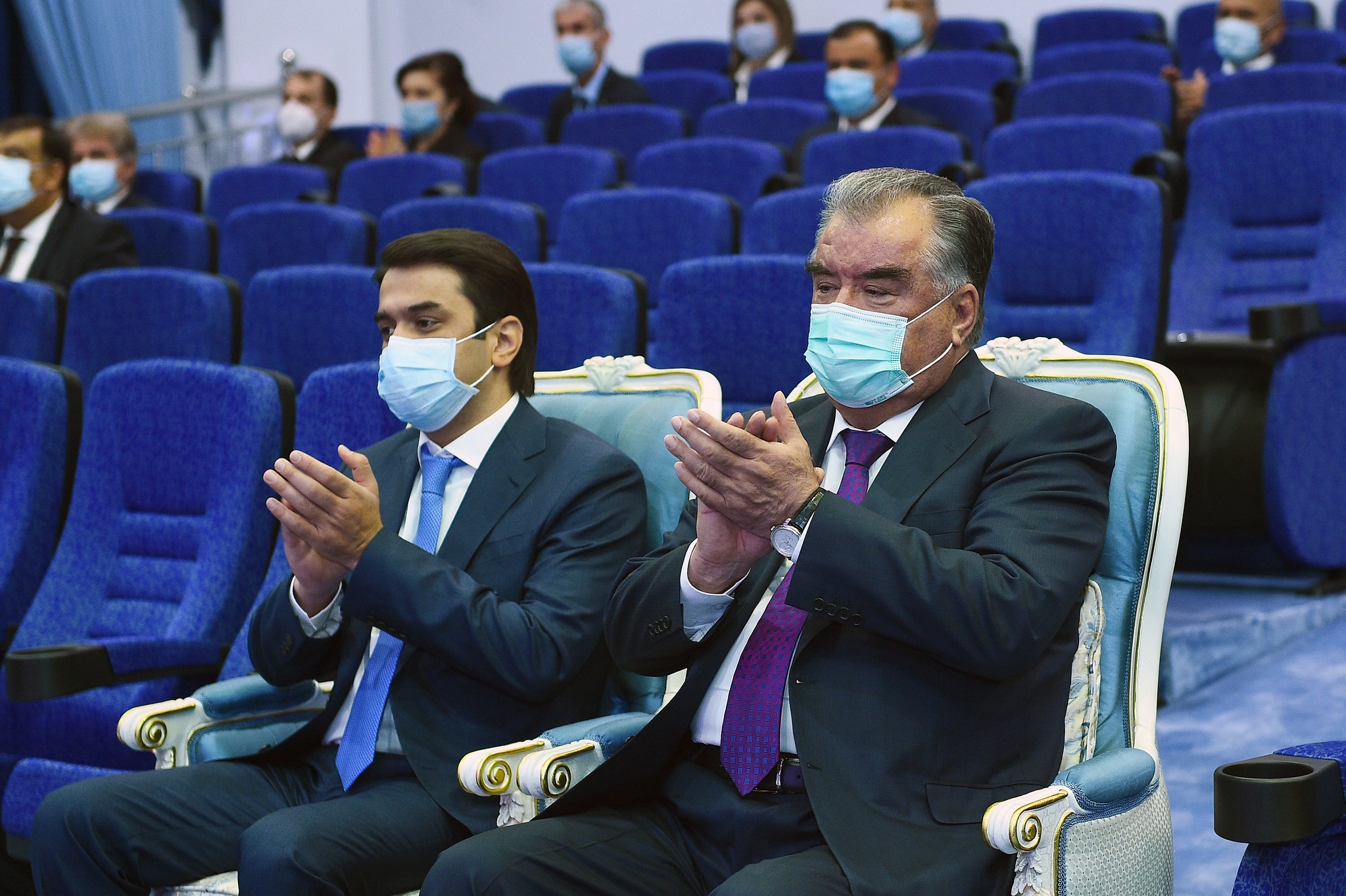 Like father, like son: Mayor Emomali and President Rahmon clapping at the opening of a preschool facility in September. (Photo: Presidential administration)

The man who is widely assumed to be in pole position to one day take over Tajikistan keeps a low profile.

But 33-year-old Rustam Emomali, son of President Emomali Rahmon, broke with his taciturn habits this week by granting an exclusive interview to state newspaper Jumhuriyat.

The remarks made by Emomali, who is currently serving in a twin capacity as mayor of the capital, Dushanbe, and the speaker of the upper house of parliament, are not encouraging about the fate of the nation’s finances should he indeed come to power.

The questions were not exactly hard-hitting, leading as they did with premises like “it is widely acknowledged that Dushanbe has become more prosperous and beautiful in recent years.” Recent changes effected to the city were the subject of most of the interview.

Emomali spoke, for example, about how city hall had over his time in office, which started in January 2017, built 47 new bus stops at a total cost of 12.9 million somoni ($1.14 million at the current rate). That breaks down to more than $24,000 per bus stop – enough to buy an entire home in many parts of the country.

The mayor listed ongoing construction of seven modern new hotels among his other achievements. His office has previously announced plans to build five five-star hotels at the state’s expense.

It is not at all obvious who is meant to stay at these facilities. Dushanbe already has three top-tier hotels and they struggle to reach full occupancy. Beautiful and welcoming as it is, Tajikistan has limited international transportation connections, severely constraining its ability to draw large numbers of big-spending foreign travelers.

Emomali said major strides forward have been made improving the city’s economy. Over the past year, 33 manufacturing enterprises opened, creating work for 1,600 people, he said. No details were provided about where these enterprises are or what they produce.

Summing up, Emomali said that more than 9,300 jobless people were provided with work in 2020.

It is difficult to be certain whether this is reliable information or mere fabrications. President Rahmon has praised advances in the country’s economy for decades at this point, but poverty is as deep and wide as ever and hundreds of thousands are still compelled to leave for menial work in Russia to keep their families fed.

Emomali’s interview may once more reawaken chatter about what is being planned for his future. There had been widespread speculation he was being primed to take part in last year’s presidential election.

That prospect had been made viable by the decision to hold a referendum in 2016 that amended the constitution to reduce the minimum age of eligibility for presidential office from 35 to 30 years. At a cursory glance, this appeared tailor-made to allow for Emomali to take the job. For whatever reason, this option was not pursued on this occasion, and so President Rahmon was reconfirmed to another term. Whether he will see out all seven years remains to be seen, however.

Exiled opposition leader Muhiddin Kabiri speculated in a recent interview that the crisis precipitated by the coronavirus pandemic may have disrupted plans.

“Apparently, they took account of the personal qualities of the successor and the socio-economic situation in the country and postponed the plan to transfer power for the time being,” said Kabiri.

And anyway, there must be more bus shelters to build.