Predictions of an imminent revolt may be wishful thinking. 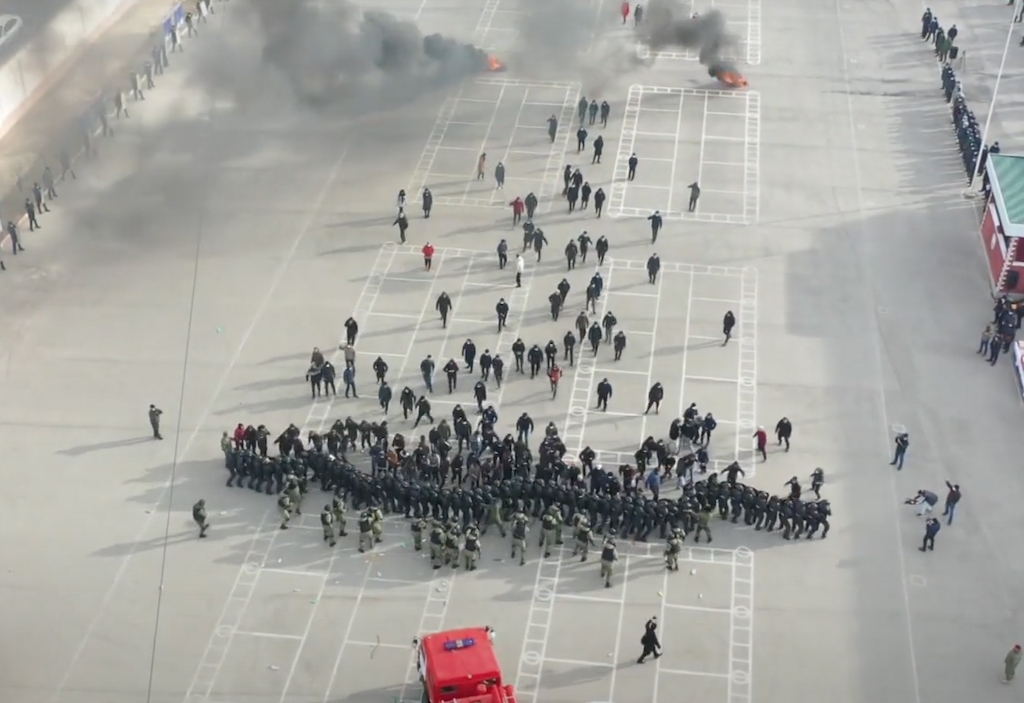 The writing is on the wall for Tajikistan’s president. Or rather, it was, until municipal workers scrubbed it off.

In what may or may not serve as evidence of changing moods, a foreign-based opposition outlet last week uploaded video footage showing a man in a Dushanbe underpass spray-painting graffiti demanding Emomali Rahmon’s resignation. A time stamp on the footage shows it was filmed on January 17. The writing was quickly washed away.

Muhammadiqboli Sadriddin, who is based in France and runs an outlet called Isloh.net, is certain about what this means.

“This is the first signal of the coming revolution,” Sadriddin forecasts confidently.

This looks like wishful thinking. And the way in which the graffiti appeared in the first place is a little suspect. There is no way of being certain that the perpetrator performed the deed out of political conviction or if he had been paid – possibly by foreign-based opposition groups.

Either way, it speaks volumes about the desperate lack of political freedoms in Tajikistan that this passes for a dangerous act of sedition. All opposition to the ruling regime has been hounded out of existence. Even when it had a presence in the country, criticism of President Rahmon was out-of-bounds.

The police state has its boot firmly planted on the people’s neck. Nobody is immune. When 80-year-old Doniyor Nabiyev, a resident of the Rudaki region, used his retirement savings to try help the desperate relatives of victims of political repression, he himself landed in trouble. As Human Rights Watch has reported, a court in December convicted Nabiyev on charges of “organizing activities of an extremist organization” and sentenced him to seven years in prison.

But the pain caused by the COVID-19 pandemic may be viewed as a fresh opportunity by Rahmon’s exiled foes to sow fresh resentment. The country was already in the doldrums before. Unemployment and low salaries drove hundreds of thousands to seek menial work abroad, mainly Russia. The coronavirus has put a stop to that since the spring. Food prices are rising, which means many have resorted to routinely skipping meals. The government is unable to provide even basic forms of support.

“Food insecurity remains seriously elevated, and far above 2019 levels,” the World Bank said in a December digest. “According to the findings of the World Bank’s Listening to Tajikistan survey, which monitors the social and economic wellbeing of the population, among those households seeking any medical care since the outbreak, 20 percent report being unable to obtain that care.”

Sadriddin claimed in remarks to Eurasianet that what happened in the Dushanbe underpass has been seen elsewhere. Similar slogans have appeared in the northern city of Khujand and in the town of Isfara, he said.

“People are tired of this regime. They want change. This is the end of the road,” Sadriddin said.

The government is evidently aware of there is some burbling of discontent and looks with disquiet at the ease with which a relatively small number of hardcore rioters were able, for example, to dislodge the president in neighboring Kyrgyzstan in October. It is taking precautions, though.

On January 21, police in Khujand simulated an incident of public unrest to envision how riot police might be deployed to put it down. In the scenario, the crowd is demonstrating angrily about power blackouts, which is a problem that genuinely afflicts Tajikistan on account of how badly the government has administered its electricity system. A few dozen, obligingly orderly protestors charged meekly at a row of anti-riot troops only to be easily neutralized. Footage of the training was repeatedly looped on news broadcasts. Some viewers actually believed, upon seeing the televised scenes at first, that they were real clashes.

The lack of imagination in play-acting unrest should probably trouble the national leadership. A genuinely angry mob would make swift work of sending poorly trained and paid police packing. Except that in real life, the authorities would almost certainly not hesitate in permitting the use of live rounds early into a crisis.

The other card that President Rahmon is playing is to bank on popular devotion.

The Leader of the Nation Museum will, according to the state news agency, “strengthen the sense of self-knowledge and patriotism, pride and the visitor’s aesthetic taste.”

Tajiks cannot say their president never does anything for them.