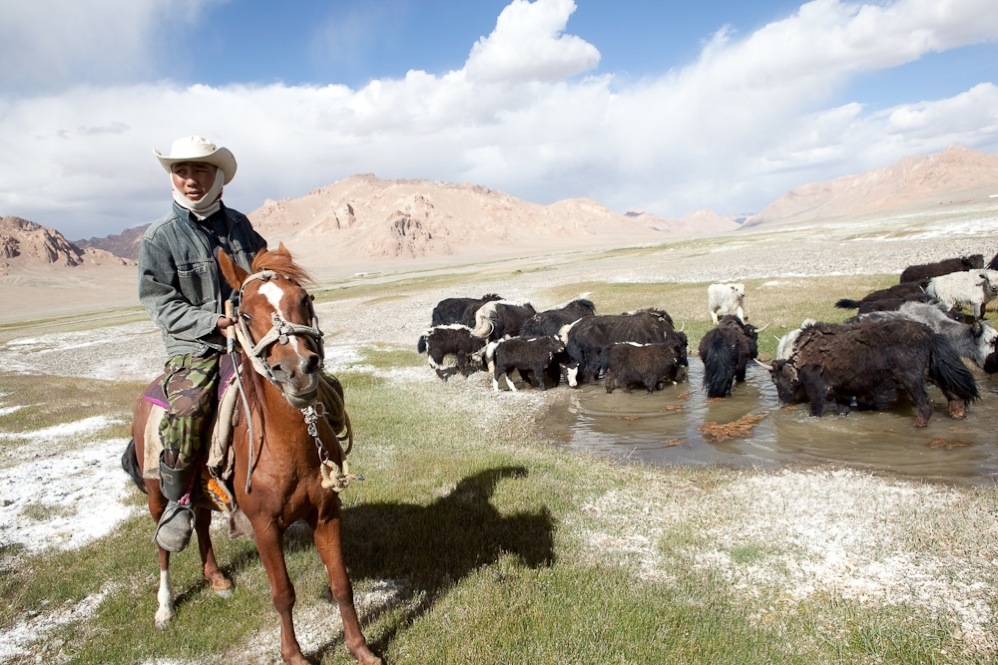 An ethnic Kyrgyz herder watches his group of yak drink from a stream. (Photo: David Trilling)

Orozbek's daughters are making green tea. As my eyes adjust to the darkness inside his family's yurt, the little girls fuss with plastic cauldrons of water around a small tin stove stuffed with yak dung.

Here on the Alichur Plateau (at approximately 3,900 meters/12,800 feet), we're closer to a provincial Chinese hub than the Tajik capital in Dushanbe, three days' drive in the opposite direction. The region is populated sparsely with ethnic Kyrgyz nomads such as Orozbek. Little vegetation grows here. The skittish yak is the only beast suited to the dry, cold and brawny sun.

It is the perfect animal, says Orozbek's neighbor, 70-year-old Maksataali. "Yaks can protect themselves from wolves, unlike cows. They are better than cows. They eat less. Their milk has more fat in it. When we move around, they carry the burden." They're independent, he adds: "When a yak delivers a baby, it starts walking right away. Their babies are much stronger. They are very wild and alive."

Female yaks return on their own to be milked in the evening, Orozbek adds as his wife dollops large spoonfuls of chunky yoghurt into a bowl before me.

Orozbek and his neighbors move 45 or 50 kilometers three times a year, searching for pastureland. They winter slightly downhill in the town of Alichur, a collection of mud brick homes without electricity or trees, so their children can attend school. At that time, with the land covered in snow and little for the yaks to eat, they purchase expensive hay.

For his 20-odd animals, "We buy two or three trucks of hay for winter," explains Orozbek. "One truck of hay costs 350 somoni" (about $80): a large sum for a region where most trade is completed by barter arrangements.

The end of the Soviet Union and the rise of independent states such as Tajikistan have brought difficult changes for headers such as Orozbek and his neighbors. Life is less predictable.

Collective farms were closed and the animals distributed, sometimes unfairly. During the Communist era, each family was allowed three yaks for private use.

"When the Soviet Union ended, yaks and sheep were distributed to families. If the family had 10 members they were given more," explains Maksataali. "Life is better now. People now live how they can. It was bad back then. People used to get little money. And the shepherd lived worse than everyone else."

Some long for the old days.

"It was better with the Soviets. The government brought us grass and food for yaks. Now, no one is helping, we are on our own, no one cares about us," laments 81-year-old Tokur, who, like most of the yak herders in their portable summer yurts, has lived as a semi-nomadic herder on these plains his whole life. The state also provided cheap coal to heat their homes.

"For animals, nothing remains. No grass remains. There is no food for the yaks." Suggesting the end of the collective farms has encouraged a baby boom amongst the hoofed herbivores, Tokur adds, "Since there is nothing in place to control them, now also the number of yaks has risen."

When it comes to protein, yaks are about the only source in this arid region. Their milk, churned into butter and yoghurt to last longer, and hard, bitter "kurut" cheese balls, keep the isolated herders alive through the nine-month winter.

Abdulafar, a butcher based in Murgab town, the dusty, quiet district capital, says his family business supplies the entire province with meat.

He distributes as far as the provincial capital Khorog, driving overnight the 300-kilometer broken road twice a week to supply the bazaar there.

As I watch his helpers complete the last kill of the morning, Abdulafar says the 30 to 40 animals they slaughter each week are killed according to Islam's halal regulations: "We say a prayer and ask god and the animal to forgive us, but we need the meat."

Blood splatters on my clothes. Two gallons must spill from the woolly female's neck into a rusty bucket before she stops kicking and groaning. Amongst the butchers, the conversation turns to religion and, gesturing to his knife, one of the gut-covered assistants asks if I'm circumcised.

Abdulafar says he pays herders 10 somoni ($2.30) per kilo for a female and 9.5 somoni for a male, marking up the meat by a somoni or two per kilo for sale in Khorog. A 250-kilo yak yields about 125 kilos of meat. Farmers sell him the live animal and come pick up the head and insides after slaughter.

The fatty female meat is more prized and expensive.

Life is better now, Abdulafar says, "if you're wealthy." Work is harder, he reasons, but the labors of capitalism present more opportunities "to make money and become a big man."