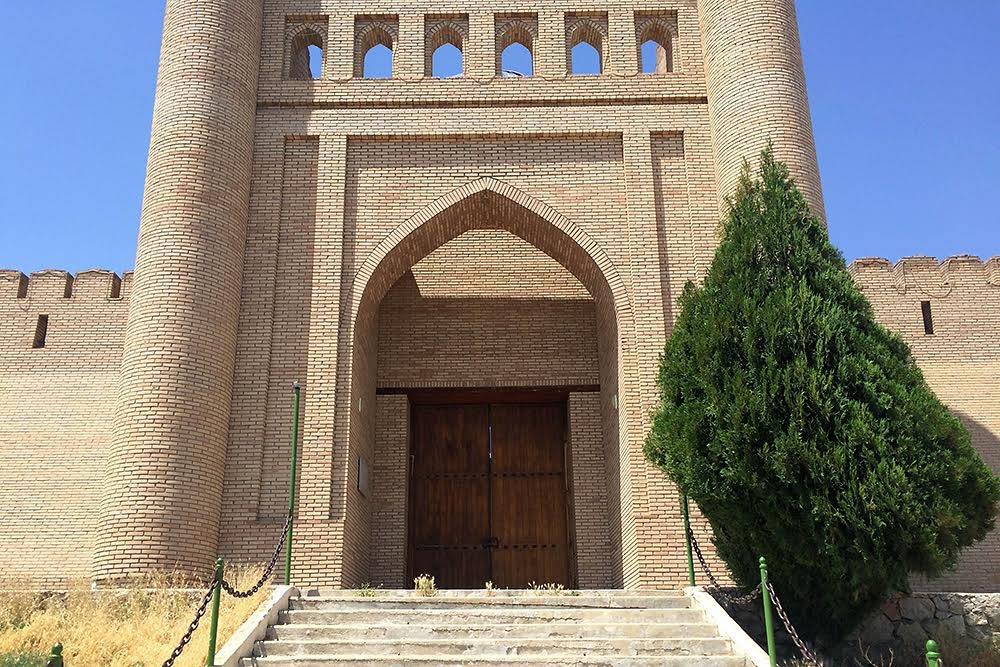 The gate, finished in 2002, is the modern entrance to the ancient Mug Tepe citadel in the northern Tajik town of Istaravshan. Restoring the ancient citadel and keeping the site attractive to tourists has slowed since the 2500th anniversary of Istaravshan more than a decade ago. (Photo: EurasiaNet)

After a brief, winding trek up the hillside along a main thoroughfare, visitors to the northern Tajikistan town of Istaravshan reach an imposing, modern bricked gate leading to the remains of the ancient Mug Tepe citadel. The fortress represents a centerpiece underpinning Tajikistan’s claims to a proud historical legacy ranging back to the First Persian Empire and beyond.

But the heritage site today is in dismal condition.

Cyropolis, as classical authors knew the place where Istaravshan now stands, was founded by Achaemenid emperor Cyrus the Great as one of several defensive bulwarks against nomadic peoples inhabiting the steppes east of the Caspian Sea. Those defenses were not enough, however, to hold off the invading armies of Alexander the Great, who reduced Cyropolis to ruins when its residents put up fierce resistance.

Tajikistan’s government has for decades talked about honoring the country’s Persian past. But if the state of sites like those in Istaravshan is anything to go by, officials are better at talking up history than they are at preserving it.

It was not always that way.

In 2002, Tajikistan marked the 2500th anniversary of Istaravshan with pomp. For the event, they unveiled the imposing arched gateway, topped by a cobalt blue dome, which now fronts Mug Tepe. For many years after the opening, the gate and the cascade of steps leading up to it served as the stage for festive events.

A small prototype of Mug Tepe was raised ahead of those anniversary celebrations. A circular stage was built in the middle of the hill to mark Tajikistan’s ninth Independence Day.

But Mug Tepe these days sees more stray dogs than tourists. Visitors to the fort find parts of the once formidable walls crumbling. Plastic water bottles and other garbage strewn across the hill where the fortress once rose only worsen the experience.

Even the relatively new dome and gate are showing signs of disrepair.

Firuza Ruhulova, a guide who works for the museum of Panjakent, another city in northern Tajikistan, told EurasiaNet.org that when she brings tourists to Istaravshan, many express disappointment. “When tourists come to Istaravshan, most of them say the city lacks the means and effort to preserve historical sites,” she said.

Ruhulova said the government is responsible for preserving the Mug Tepe site and that neither UNESCO nor any other international bodies are contributing upkeep funds. An official involved in the restoration of heritage sites in Tajikistan said the government has set money aside for repair works, but nowhere near enough.

In 2012, the government set out a budget of 2.5 million somoni (worth roughly $520,000 at the time) to refurbish Mug Tepe over an eight-year period running to 2020. “Last year, the central government (in Dushanbe) provided 200,000 somoni (out of the earmarked 2.5 million), and this year they allocated 100,000 somoni to start construction of the site. Yet, the local government of Istaravshan did not set aside even 100,000 somoni to draw up a construction project. [The local government] took 2-3 years to complete the plan. But if you look at the project, you can still find a few mistakes,” said the official, speaking on condition of anonymity.

Pointing at a 20 meter-long section of a wall, the official said that 920,000 somoni was needed to restore only that part. Because of the devaluation of Tajik currency, the allocated money is insufficient to surround the hill with a wall, the restoration official explained.

“We are restoring the walls gradually. We get around 100,000-200,000 somoni every year to build some parts of the wall. But we will need around 12-13 million somoni to build the walls and a small market to accommodate craftsmen inside Mug Tepe,” he said.

The list of neglected sites does not end with Mug Tepe. Kok Gumbaz, a 15th century mosque and madrassa, along with the Rustambek madrassa, are other victims of inattention in Istaravshan.

Writing in the May 2015 issue of Perspectives on Central Asia, Edward Schipke described the disheartening experience of touring Kok Gumbaz. “On an autumn visit in 2014 the gate was unlocked and no caretaker was present. Local kids had assumed the role, guiding visitors on a spiraling staircase to the dome, around which brown and yellow weeds have gone airborne and taken root,” Schipke wrote.

A five-story building has sprung up at the foot of the hill where Mug Tepe is situated. That has elicited the ire of those battling against the odds to preserve heritage sites.

The restoration works expert said that graft makes it easy for developers to circumvent rules in Tajikistan, where, he said, officials “sell off land and stuff themselves because they know that in two or three years they will lose their positions anyway.”

Construction works on the five-story building was halted after a visit from the Deputy Culture Minister in 2013, but with money at stake, it is uncertain for how long.

“They have bought everything, and if we let them, they will buy the Mug Tepe fort itself,” the official said.