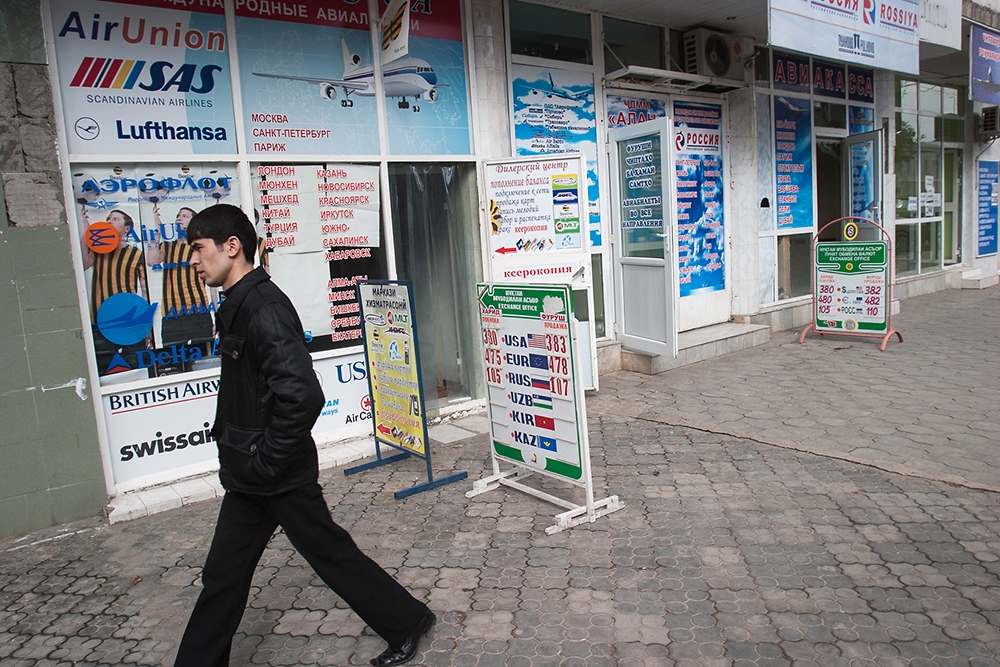 A pedestrians strolls along a street loaded with air-ticket agents and money-changing offices in Dushanbe in February 2009. The Tajik somoni has slid almost 17 percent so far this year, to 6.23 somoni per dollar, according to the official exchange rate. (Photo: David Trilling)

Tajikistan's government is struggling to prop up its currency amid downward fiscal pressure emanating from Russia. Dushanbe’s policies appear to be creating a black market for currency traders with potentially long-term repercussions for the ailing economy.

Tajikistan’s top export is workers: labor migrants – mostly men working in Russia – send home the equivalent of 49 percent of GDP in the form of remittances, according to the most recent World Bank figures. That makes Tajikistan the most remittance-dependent country on earth. But with the Russian ruble’s crash in 2014, the dollar value of those remittances – which are critical for keeping many Tajik families afloat and for boosting local spending – fell dramatically, by 8 percent in the fourth quarter. The World Bank expects remittances to shrink another 23 percent this year.

Meanwhile, with less currency flowing into the country, the Tajik somoni has slid almost 17 percent so far this year, to 6.23 somoni per dollar, according to the official exchange rate. Aiming to better manage the rate’s fluctuations, on April 17 the National Bank ordered all private exchange offices to close, accusing them of speculating on the currency. A few days later, law enforcement agencies announced 200 investigations into currency trading violations.

Since then, currency traders have moved into the shadows, where they are now selling dollars at 7 somoni per dollar. One says that he has plenty of customers. “Demand is high; the banking rate is [artificially] low. Banks are not selling hard currency. They are either hoarding their dollars and euros or they simply do not have them,” Khotam, the owner of a private currency exchange office near the Shohmansur Market in Dushanbe, told EurasiaNet.org.

Khotam (who declined to provide his last name out of fear of reprisals) complained that the order to shut down his business is costing him dearly, and that he and his partner have no choice but to trade currency illegally. “We have rented premises for our office, we paid taxes,” he said.

“This is not the most profitable business, given the significant risks,” he said, adding that officials would be hard-pressed to stop the black market currency trade, as traders like himself can simply buy protection from Dushanbe’s notoriously venal police.

Economists warn that Tajikistan could emulate neighboring Uzbekistan, where the difference between the National Bank rate and the black market rate has grown to over 40 percent. “Currency is a commodity – just like bread. According to the laws of market economics, the growth of demand over supply causes a deficit,” the Asia-Plus weekly quoted Nozim Ishankulov of the Tajikistan Free Market Center as saying. “Money changers will simply withdraw into the shadows […] charging extra for the [new] risk.”

A black market for currency will make the somoni less tradable and Tajikistan even less attractive for international investors than it already is. The country already has a tenuous reputation among investors, given its rank of 152nd out of 175 countries surveyed in Transparency International’s most recent Corruption Perceptions Index.

Meanwhile, the government is burning through reserves to defend the somoni. It is unclear how much it has spent overall, but in March Asia-Plus quoted the National Bank First Deputy Chairman Jamshed Yusufiyon as saying the Bank was spending between $1.5 million and $3 million a day.

Amid the somoni’s decline, retail turnover and imports have fallen. Foreign trade turnover fell almost 16 percent in January and February, compared with the same period the previous year, according to the Ministry of Economic Development and Trade. Home sales also appear to be slowing in the absence of buyers – the market had long been fueled by remittances.

It is unclear what the government’s long-term plan for the somoni is. The National Bank promised on April 22 that the trading restrictions would be lifted once the currency stabilized, but gave few details. That does not inspire confidence among some analysts, who fear the effect of surging inflation. The Asian Development Bank predicts inflation in Tajikistan to hit 10 percent this year. “With very limited currency stocks, the authorities need to seriously think about the prices of basic food products and to provide incentives for [food] importers and domestic manufactures,” local economist Shuhrat Azizov told EurasiaNet.org.

Instead, authorities are acting like money grows on trees. Last month, the president launched construction of a new $100 million National Theater – the biggest in Central Asia – though the capital has no shortage of theaters, only of theatergoers.

New government buildings are rising on large swaths of the old city. The Dushanbe mayor’s office announced on April 24 that it will soon build a giant new tower – dubbed “The Symbol of National Unity” – which, from designs made publicly available, seems like a hallucinogenic riff on the Eiffel Tower, complete with shops and an observation deck.

All this construction could create jobs, and be part of an anti-crisis measure, optimists say hopefully. But imported Chinese laborers build most official projects in the capital and building materials are largely imported.