The authorities have made little effort to disguise their disregard for the polls. 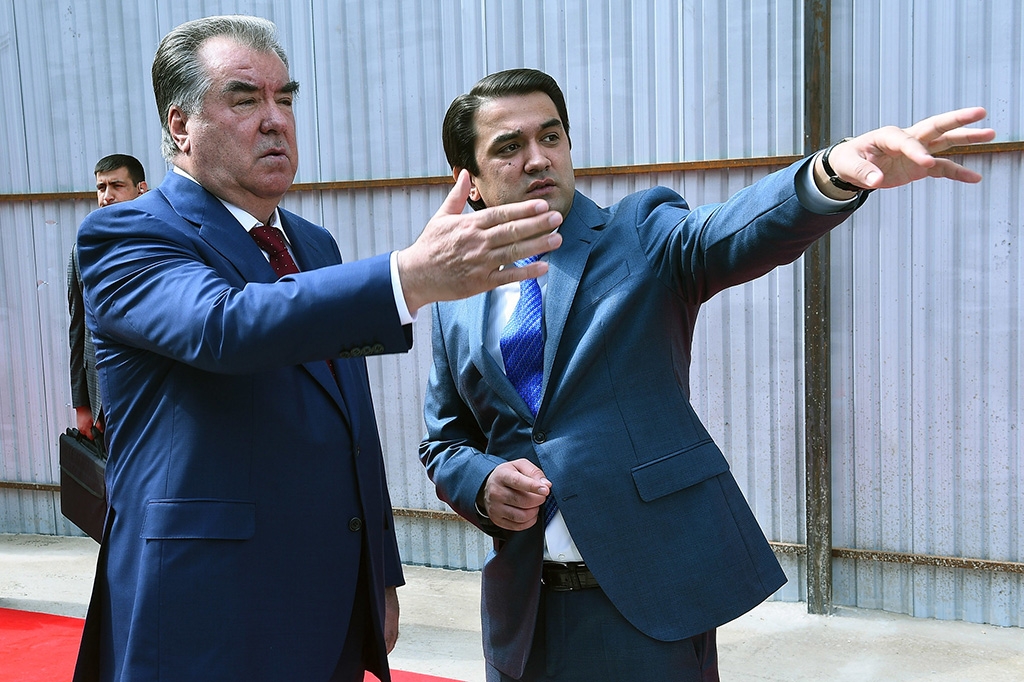 Strongman and scion: Emomali Rahmon and his son Rustam Emomali, the mayor of the capital. (government handout)

An election is about to take place in Tajikistan. Not many people know why.

The date of the March 1 vote to pick a new 63-member lower house of parliament is a mere matter of schedule. The last vote was in 2015 and the legislature has a five-year mandate.

As an exercise in democracy, however, the process is devoid of significance.

“These elections mean nothing for the government, for MPs and for the population itself. Parliament is a body of secondary importance, it has no impact and represents nothing of interest,” political analyst Parviz Mullojanov told Eurasianet.

The authorities, the ruling People's Democratic Party of Tajikistan, or PDPT, which will win almost all the seats, and the handful of pocket parties also in the running have made little effort to disguise their disregard for the polls.

There has been next to no campaigning. In the capital, Dushanbe, in the final days before the vote, some bland leaflets appeared scotch-taped to trees and walls. There are countless billboards and posters up and down the country carrying the image and sayings of President Emomali Rahmon, who is the official leader of the PDPT, but those are there all the time.

Rahmon is one of only a handful of national politicians that most ordinary members of the public recognize.

Of the dozen or so people queried by a Eurasianet correspondent on Dushanbe’s streets this week, only one was able to name an MP currently sitting in parliament – the combover-sporting speaker of the chamber, Shukurjon Zuhurov. More than half were uncertain whether the election was to elect a president or the parliament.

Those who are politically aware are often cynical.

“I am not even going to vote since I know that the outcome of the elections is already known. The people who get into parliament will be the ones pressing buttons and approving the decisions of the president,” Dushanbe resident Muzaffar Davronov told Eurasianet.

The ruling party does have fans who are willing to talk about their preference though. Shakhnoza, an 18-year-old first-year university student, reprised familiar mantras in explaining her intentions.

“These are my first elections and I will be voting for the president’s party, the PDPT,” she said. “The Leader of the Nation [an official honorific designation for Rahmon] has brought us peace and stability. Let him lead the country in the future too.” 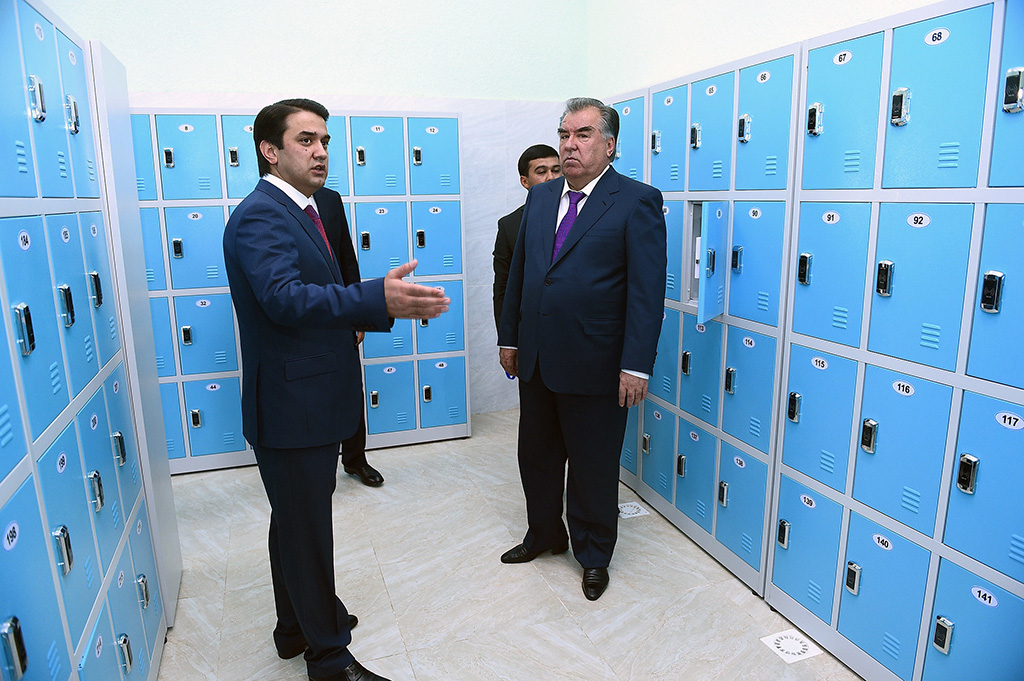 Despite the general indifference, official turnout at the elections will be strong. The electorate, which is currently more than 4.7 million people, is routinely mobilized into participating through a variety of means.

“At our polling station, if we do not go to vote, they come knocking at our door,” Ikhtiyor, a 34-year-old Dushanbe resident, told Eurasianet. “For that reason, I will go and vote first thing in the morning […] but I don’t know a single deputy standing, or anything about their platforms.”

The unlawful practice of one person voting for the whole family is so commonplace that it is typically done in full view of polling station officials, none of whom bat an eyelid.

“I have never voted, and I have no idea who is taking part in these elections,” said Zaytuna, 25, from Dushanbe. “Our father goes with our passports. He will vote for the communists. He still remembers how under communism they got a salary that lasted until the end of the month, how bread cost one kopeck and that student stipends were enough to pay for trips to the cinema and transport.”

That is something of an outlying position. Six parties were elected to parliament in March 2015 elections. The PDPT got 51 seats. It was followed by the Agrarian Party, with five seats, the Party of Economic Reforms, three seats, the Communist Party, two seats, and the Socialist Party and the Democratic Party, one seat apiece.

“The results are already known – it will be the same parliament we have now,” he said.

The 2015 election was the last one to see the involvement of Tajikistan’s only serious and viable opposition force – the Islamic Renaissance Party of Tajikistan, or IRPT. It lost its only two seats in a heavily engineered contest.

IRPT’s campaigning used to be done in the face of copious harassment and intimidation. Party representatives touring the country were routinely assaulted by stone-throwing mobs and denied venues in which to speak to prospective voters.

But that was nothing compared to what came in 2015. In September that year, the government claimed, without ever providing credible evidence, that the then-deputy defense minister Abduhalim Nazarzoda had mounted an attempted coup in concert with the IRPT. Almost all the IRPT’s leadership was then sentenced to long terms in prison and the party was banned.

The only ostensibly opposition group taking part in these elections, if merely to offer the proceedings a thin veneer of credibility, is the Social Democratic Party, or SDPT. Ever since the SDPT was formed in the late 1990s, it has operated on a minute budget and failed to make much impact, not least as it too has endured harassment and denials of registration.

The party’s deputy chairman, Shokirjon Hakimov, said that it only received formal clearance to participate in the elections 18 days before the vote. That has limited the scope of its campaigning.

Still, Hakimov is optimistic. Some might even say deluded.

“If the elections are transparent and fair, as the president has promised, there is a chance that we could end up in parliament,” he said.

Observers from the Organization for Security and Cooperation in Europe, the most reputable transnational vote monitor, have never given a Tajik election anything remotely resembling a clean bill of health.

Temur Varki, a spokesman for the exile-run National Alliance of Tajikistan, or NAT, a coalition of opposition groups that includes the IRPT, said that foreign-based opponents of the regime decided after much debate to endorse the SDPT.

“Notwithstanding the fact that Emomali Rahmon has usurped power for 27 years, elections remain a legal right and an instrument for society to effect peaceful, non-violent change,” Varki said. “Political consciousness among voters will give them the grounds on which to demand respect for their vote and choice. Our call for participation in the elections in favor of the SDPT is designed not only for today. Participation in elections is necessary for the formation of mature public consciousness.”

A very substantial number of eligible voters will not even be able to cast their ballots. Hundreds of thousands of Tajik adults live and work in parts of Russia where polling stations have not been set up. Varki speculated that the authorities might vote on behalf of absent electors, thereby boosting their numbers.

“We intend to test an alternative electronic voting in these elections,” Varki said. “We hope this will give us a picture that we can compare with the one shown by the authorities.”

Some mild intrigue involves the election for the Dushanbe city council – a series of local elections is taking place in parallel with the parliamentary polls.

Candidates for the Dushanbe legislature include the president’s son, Rustam Emomali, who is currently the mayor of the capital and is often seen at his father’s side at public events. Other shoo-ins are known members of Emomali’s posse. These include Dilshod Saidzoda, who is the son of the head of the presidential guard, Zaynullo Sharifzoda, a brother of one of the president’s sons-in-law, and Khurshed Fayzullozoda, a former schoolmate of Emomali’s.

Eyes are trained on 32-year-old Emomali because there is considerable speculation that he is being primed to eventually take over from his father. The Dushanbe council election looks like a stepping-stone in that direction, although there is no clarity when and if his turn will come.