The government has given itself little room for compromise by grouping the Islamic State and ordinary opposition parties. 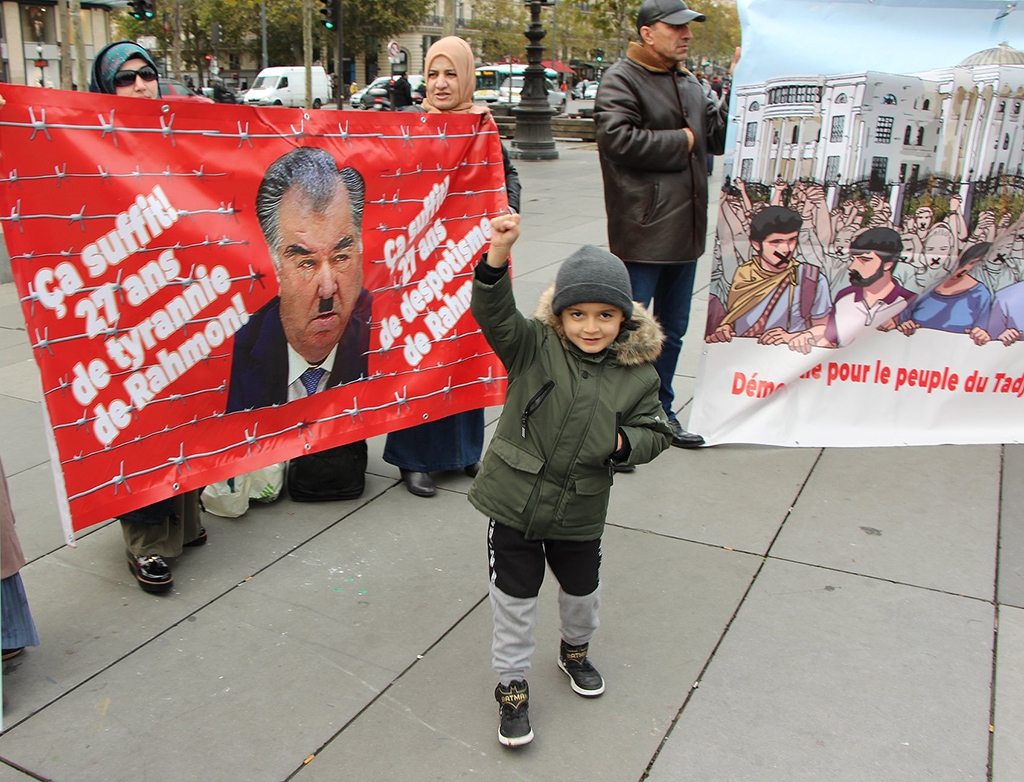 A protest during Rahmon’s visit to Europe last year (Facebook)

In their state of forced exile, critics of President Emomali Rahmon’s regime have struggled to remain relevant – a challenge that has been compounded by suspicion and relentless infighting.

Distance has not made activists immune to repression. Dushanbe has successfully repatriated some of its opponents against their will. Some have been murdered. Others yet have family back home who face unrelenting harassment at the hands of the authorities.

The opposition-in-exile, which is largely based in Europe, is composed of an array of disparate groups. The most prominent among them is the Islamic Renaissance Party of Tajikistan, or IRPT, which was hounded out of the country in 2015 – a year that saw it lose its two seats in parliament, the arrest of its leadership and its designation by the Tajik courts as a terrorist group.

In September 2018, the IRPT and three other groups – the Forum of Tajik Freethinkers, Reforms and Development in Tajikistan, and the Association of Central Asian Migrants – merged to form one body called the National Alliance of Tajikistan.

Other notable organizations are Group-24, led by Suhrob Zafar, who was confirmed to that position after an internal vote this year, and the Vatandor movement led by Germany-based Dodojon Atovulloyev, who has seemingly made peace with the Tajik government in recent years.

The bulk of what could pass for activism is conducted on social media and platforms like YouTube. IRPT leader Muhiddin Kabiri does monthly live online broadcasts in which he addresses viewers’ questions. Other movements engage in similar forms of outreach.

Politically minded Tajiks abroad are notoriously paranoid and profoundly reluctant to communicate with loosely acquainted compatriots or even one another. That cautiousness is fueled by fears of entrapment at the hands of the Tajik security services, which are known to be active in Europe.

Kabiri said that it took two years of groundwork to bring about the National Alliance of Tajikistan.

“By 2018, it had become clear who was prepared to unite and who preferred to work separately,” Kabiri told Eurasianet. “Recently, another organization of Tajik migrants submitted an application and we will consider this matter at the next NAT council.”

What unifies Tajik opposition figures, even many of those outside the NAT, is their shared contempt for President Rahmon, who has run an increasingly despotic and nepotistic regime since the early 1990s. Policy-wise, whatever Rahmon has resisted bears an immediate appeal.

Sharofiddin Gadoyev, who leads Reforms and Development in Tajikistan, a constituent group of the NAT, had called publicly for Tajikistan to join the Moscow-led Eurasian Economic Union, or EAEU, trading bloc. Rahmon has refrained from doing so, seemingly over misgivings about excessive dependence on Russia.

But Gadoyev has said that with the remittances of migrant laborers in Russia equivalent to almost half of Tajikistan’s GDP, it only makes sense to seek accession into a body that would ensure an end to the headache of work permits and deportations.

“We have more than a million migrants working in EAEU countries. If they receive additional benefits, it will help the country's economy. Even if we lose some of our economic independence, we hope that the situation will be compensated by (the improvement in the situation for) migrants,” he told Eurasianet.

Like political exiles the world over, Tajik opposition politicians removed from the realities of life back at home struggle to preserve relevance. Zafar Sufi, founder of the now-defunct independent news website Ozodagon, said that this pushes activists to seize any opportunity available.

“The violation of basic human rights means the number of opposition supporters is growing. But the question is whether they can influence the situation,” he said.

Edward Lemon, an assistant professor at the Washington-based Daniel Morgan Graduate School of National Security (and a former Eurasianet contributor), said that the government has been effective in marginalizing the opposition by “portraying them as extremists and cowards who fled the country.”

“Despite forming a National Alliance, the opposition is hampered by infiltration by the security services, repression targeting their family members and infighting within and between groups,” Lemon told Eurasianet. “Their audience within the country remains small, and the government has taken steps to prevent them being heard within the country,” such as blocking the social media networks they use to broadcast their messages.

It is not just the Tajik authorities that have historically sought to exploit and undermine activists, according to Tajik political analyst Parviz Mullojanov.

“The Russian security services used opposition groups, most of which were based in Russia, as a bargaining chip and an instrument of pressure on the Tajik leadership,” Mullojanov said. “As soon as Russia reached a compromise, they began deporting opposition figures back to their homeland.”

Gadoyev’s sympathy for the EAEU is striking for this reason. When Gadoyev was snatched off the streets of Moscow in February 2019 and unlawfully spirted to Dushanbe, it was done with the full connivance of the Russian security services.

There are other camps to consider.

One is the minute and token opposition still left inside the country. The embattled Social Democratic Party, led by Rahmatillo Zoirov, intends to take part in the perfunctory March parliamentary elections. This will be a largely pointless exercise since only slavishly pro-government parties are in effect allowed to sit in the legislature.

Then there is a virulently anti-government, militant Islamist contingent whose size and scope for action is impossibly to usefully assess for a number of reasons. Hundreds of Tajik nationals traveled to Syria to join forces with militant forces engaged in the war there, but many, not to say most, of those people were either killed or captured.

But there is evidence that economic despair and disaffection continue to broaden the ranks of nihilistically inclined individuals in Tajikistan, such as the young, Islamic State-affiliated men who murdered a group of cycling tourists in July 2018. If the Tajik authorities are to be believed – and there are constant reminders they should not – the country’s prisons and areas beyond the border with Afghanistan are teeming with Islamic State militants.

The government has given itself little room for maneuver by, in effect, putting groups like Islamic State and ordinary political formations on the same plane. That makes the prospect of opposition movements being readmitted into Tajikistan a remote one.

“Even if there were an opening of the political system in Tajikistan, it is difficult to see the government reprieving and rehabilitating the opposition,” said Lemon. “We are likely to see more of the same: the opposition voicing their criticisms in the independent media and in international forums, but ultimately lacking extensive influence in the country.”