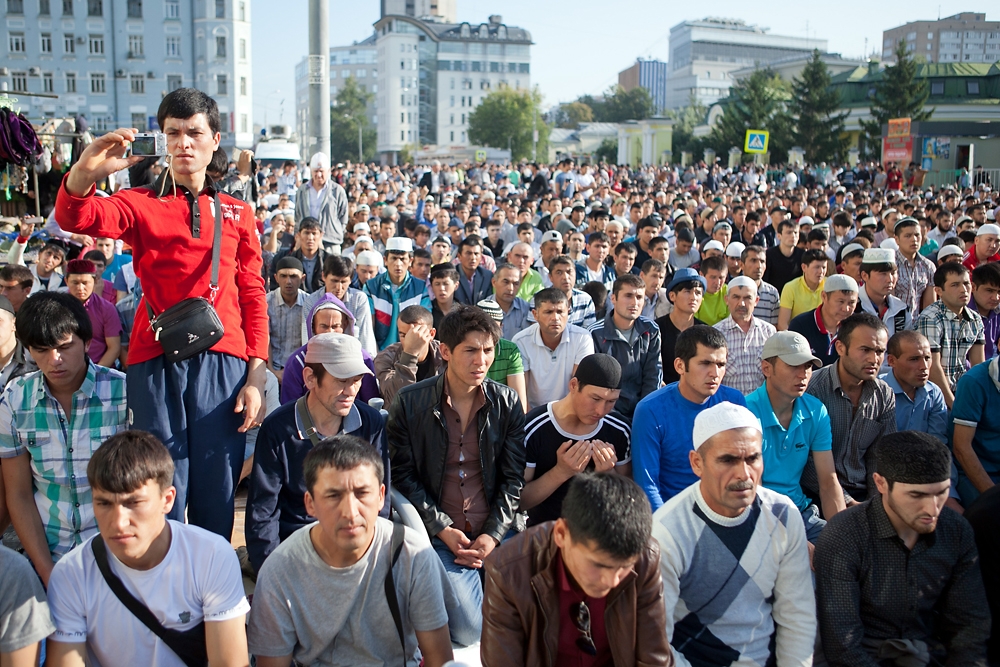 Migrants contribute the equivalent of 48 percent of Tajikistan’s GDP, according to the World Bank, making the impoverished country the most remittance-dependent in the world. Estimates vary, but almost half of Tajikistan’s male workforce is thought to be working abroad, mostly in Russia.

The migrant-labor role in the economy is having trouble fitting in with the image of Tajikistan that President Imomali Rakhmon’s administration wants to project to the outside world. Rakhmon has spent huge sums on mega-projects in the capital Dushanbe partly in an effort to distance the country from its reputation as Central Asia’s poorest state.

The government also doesn’t look kindly upon those who would like to honor labor migrants. The most recent such initiative began in February, when Tajik blogger and journalist Isfandiyor Zarafshoni started a petition calling for the construction of a monument to migrant workers.

“Every city in Tajikistan has a monument to Ismoil Somoni, founder of the Tajik state. Many cities and regional centers still have monuments of Vladimir Lenin. Some cities and regions have monuments of [medieval poets] Rudaki and Ferdowsi. But why don’t we have the most necessary and most important monument, to the Labor Migrant?” Zarafshoni told EurasiaNet.org. “They leave behind their families and children, parents and dreams. With their hard work, they build the Tajikistan in which we live today.”

“They are often treated badly, insulted and humiliated, go unpaid, are beaten and even killed,” Zarafshoni continued. In 2013, 942 Tajik guest workers returned to Tajikistan from Russia in coffins.

The government has not formally commented on the latest initiative, but officials tell EurasiaNet.org the idea is a non-starter. “I don’t see a need for a monument,” said Suhrob Sharipov, an MP for Rakhmon’s People’s Democratic Party of Tajikistan.

This isn’t the first time recently that the Tajik government has appeared uneasy acknowledging the country’s economic reliance on migrants. Last July, the National Bank stopped publishing remittance data, arguing it could be “politicized.” The change has done little to hide the information, as data is still available from transfer points in Russia.

Critics say the government is trying to bury its head in the sand. On April 1, the Asian Development Bank said Tajikistan’s robust 7.4 percent growth in 2013 was “supported mainly by remittances,” and warned the economy is slowing as the government does too little to attract private investment. The International Monetary Fund has repeatedly said Tajikistan’s dependence on migrant transfers leaves it vulnerable to external shocks and has encouraged the government to focus on local job creation.

In 2011, Olga Tutubalina, editor of Dushanbe’s Asia Plus newspaper, also proposed a monument to migrants. Back then she wrote an open letter to the government, noting that Tajikistan’s population survives because of the labor migrants working in Russia and Kazakhstan. “Why don’t we replace the billboards featuring photos of the president with pictures of the people who feed us every day?” Tutubalina told EurasiaNet.org.

A spokesman for Rakhmon’s party says monuments are installed for heroes. Migrants, he argues, go abroad to enhance their personal lives. Therefore, they’re not heroes. “There are 200 million migrants worldwide, but none of their countries have installed a monument to them,” People’s Democratic Party spokesman Usmon Soleh told EurasiaNet.org. His claim is not exactly accurate: Mexico, for example, boasts monuments to its citizens who have gone to the United States to better their lives and the lives of their families back home. Meanwhile, Istanbul has a monument to the unnamed and overlooked porter, outside the famous Grand Bazaar.

Building a monument would “acknowledge that labor migrants play an important role in the internal politics of Tajikistan,” said Shokirdjon Hakimov, deputy chairman of the opposition Social Democratic Party. Authorities will not permit a monument because their own “ineffective economic policy” has forced migrants to leave the country, which is embarrassing. The National Bank’s decision to stop publishing remittance data was “a political decision,” added Hakimov.

Sharipov, the MP close to Rakhmon, insists the government is not embarrassed. He dismissed the idea the country is financially dependent on migrants and rejected accusations the National Bank’s decision to withhold data was political.

But outside of those in government, few in Dushanbe’s chattering classes seem to buy official explanations. Any acknowledgement of labor migrants’ significance, said political scientist Saimiddin Dustov, “would mean admitting the impotence and the irrelevance of the government’s economic programs.”