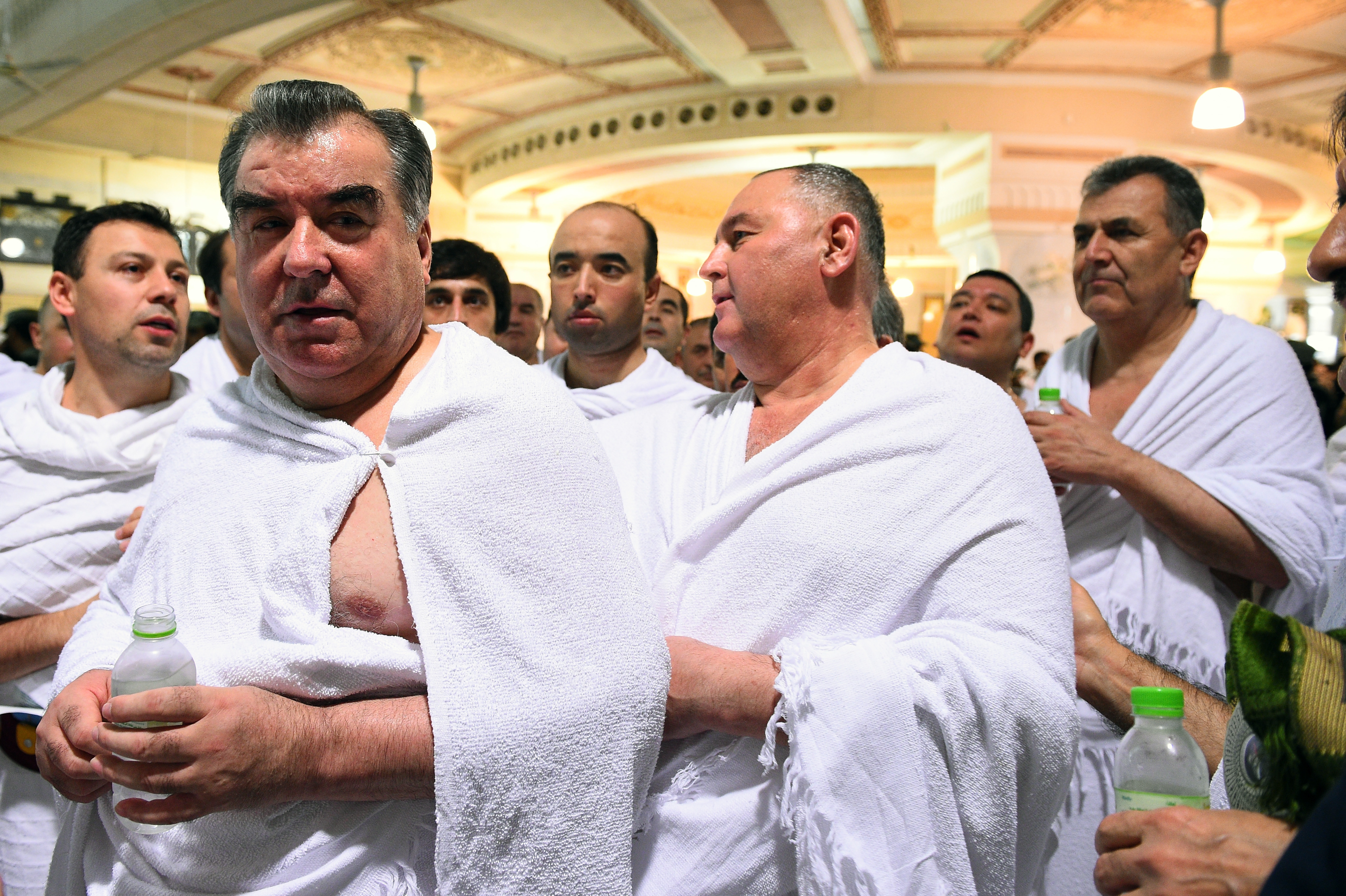 Emomali Rahmon during his pilgrimage to Mecca, in Saudi Arabia, in January, 2015.

In a striking change of tack from his regular aversion to all things Muslim, the president of Tajikistan has flown to Saudi Arabia with a bevy of relatives and senior officials to go on a pilgrimage to Mecca.

Emomali Rahmon performed the Umrah — as the pilgrimage is known when not carried out during the period devoted to the Hajj — as a bonus excursion during his begging visit to Saudi Arabia.

An extraordinary series of photos, published on January 5m, show Rahmon wrapped only in a flimsy robe, which struggles to contain his not unsubstantial girth, and reveal how many members of his family he took along. There is the first lady, Azizamo Asadullayeva, Rahmon’s eldest daughter, Firuza, another daughter, Ozoda Emomali, his youngest son, Somon, and a son-in-law, Djamoliddin Nuraliyev. Other faces visible in the crowd belong to the education minister, the economy minister, the transport minister, the head of the country’s largest bank, the head of the committee for religious affairs and the sports and tourism minister.

The presidential website reveals that the gang prayed collectively for the future of Tajikistan. By the intercession of the Saudi king, Rahmon was admitted to the Kaaba, the building at the center of Mecca’s most sacred mosque. Officials in the presidential administration say this was Rahmon second visit inside the Kabaa — a special privilege — and his fourth pilgrimage to Mecca overall.

This level of professed piety may all be very surprising to Tajikistan-watchers, who have seen the government increasingly clamp down on outward displays of devotion among Muslims.

Women below the legal age are not permitted to attend the mosque and wearing hijabs is forbidden in universities. Men wearing beards are routinely stopped by police and taken in for questioning. Last year, markets began banning the sale of overtly Islamic clothing, which the authorities deem to insufficiently Tajik.

Rahmon has said in broadcast remarks that women adopting the hijab — like the one worn by his wife and daughters in Mecca for instance — were “lost” and should be taken to task.

Tajikistan has also suspended all its madrassas and civil servants are discouraged from attending Friday prayers.

Rahmon’s top priority while in Saudi Arabia appears to have been more mundane and in addition to his robes, the president also brought along his begging bowl.

The Tajik delegation has come away with multiple intergovernmental agreements, pledging cooperation in the areas of crime prevention, youth and sports, air transportation, science, technology and education.

Though perhaps not religious education, since Tajikistan made a splash in 2010 by recalling more than a thousand students from madrassas in Egypt, Iran and Pakistan amid concerns that they might come under the influence of radicals Islamists.

On a more substantive front, Rahmon also managed to secure a commitment from Saudi Finance Minister Ibrahim Abdulaziz  Al-Assaf for the Islamic Development Bank to fork over $108 million for the reconstruction of roads in southern Tajikistan.

Rahmon may have prayed, among other things, that his Saudi benefactors prove as relaxed about their credits as the international financial institutions that have helped Tajikistan’s corruption-ridden government totter along over the years.