Tajikistan’s Pamir Highway: A Decaying Lifeline to the East 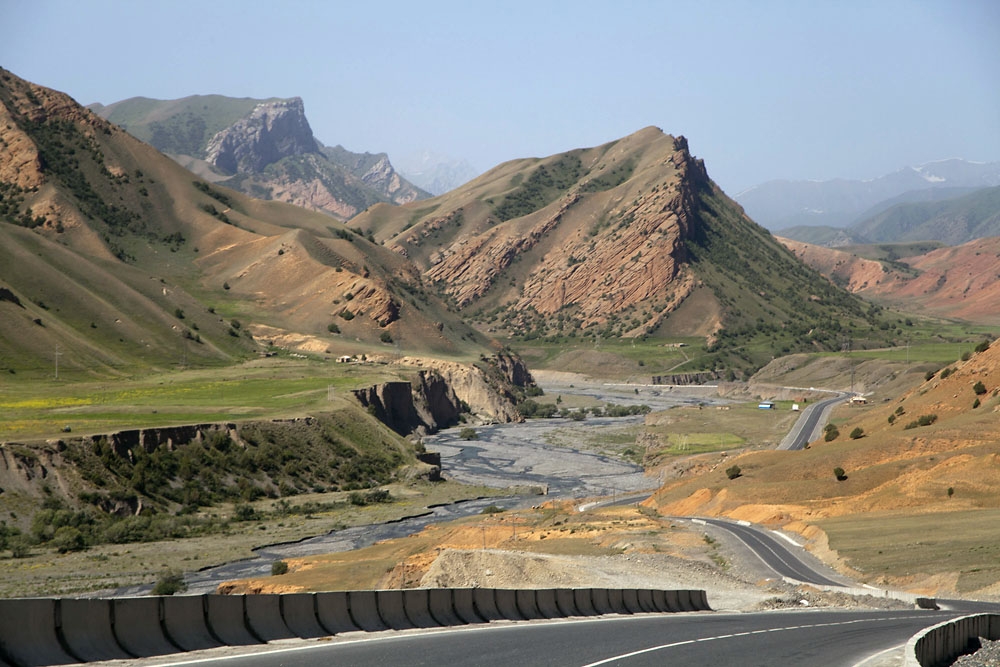 The Pamir Highway between Osh and Sary Tash, Kyrgyzstan, is paved, painted, and somewhat maintained. 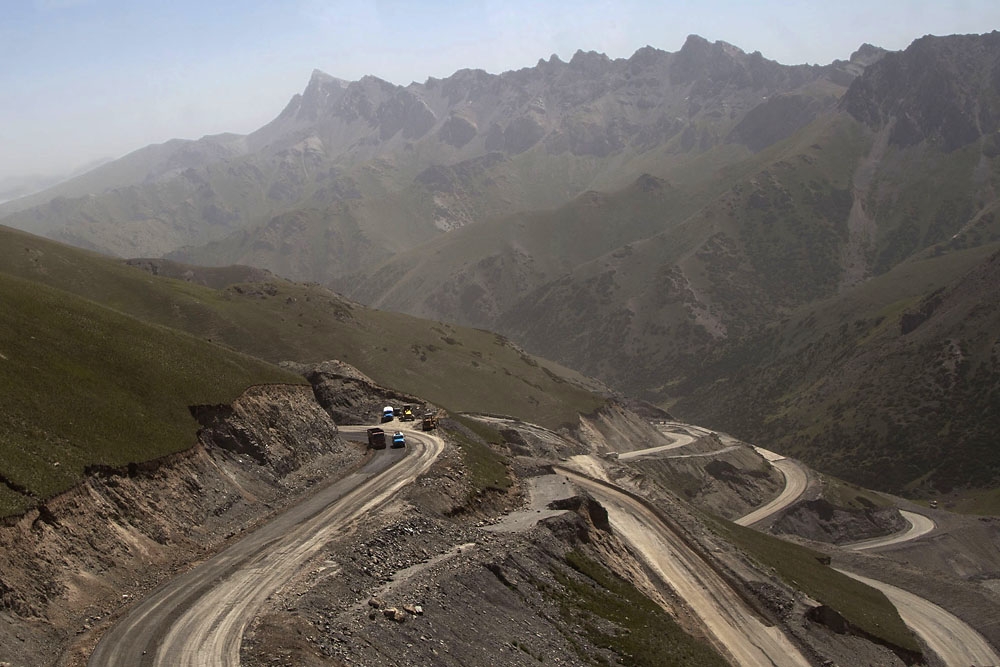 As the road reaches the mountains it snakes its way over the peaks. 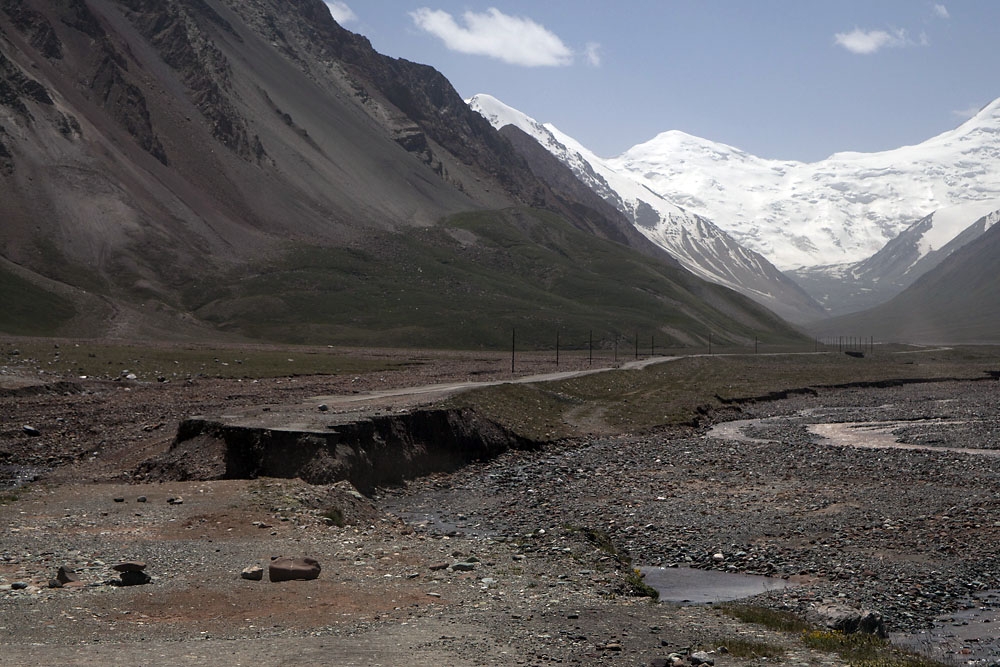 A section of the highway in Kyrgyzstan has been washed away. 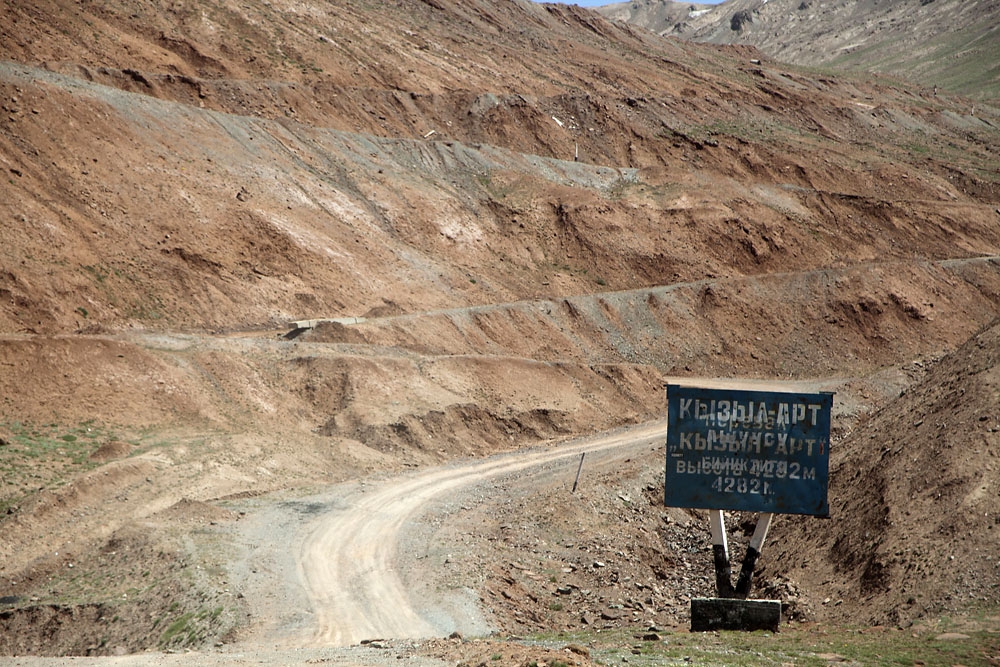 A sign marks the ascent on the Kyrgyz side to the 4,282-meter Kyzyl-Art Pass between Kyrgyzstan and Tajikistan. 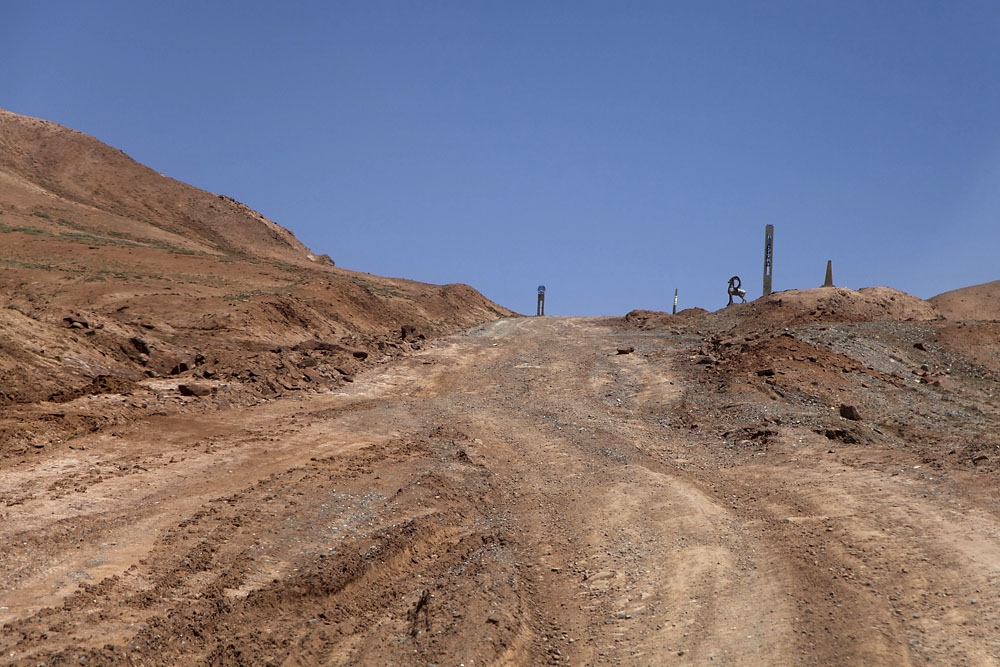 The approach to the Kyzyl-Art Pass is a rutted dirt road. 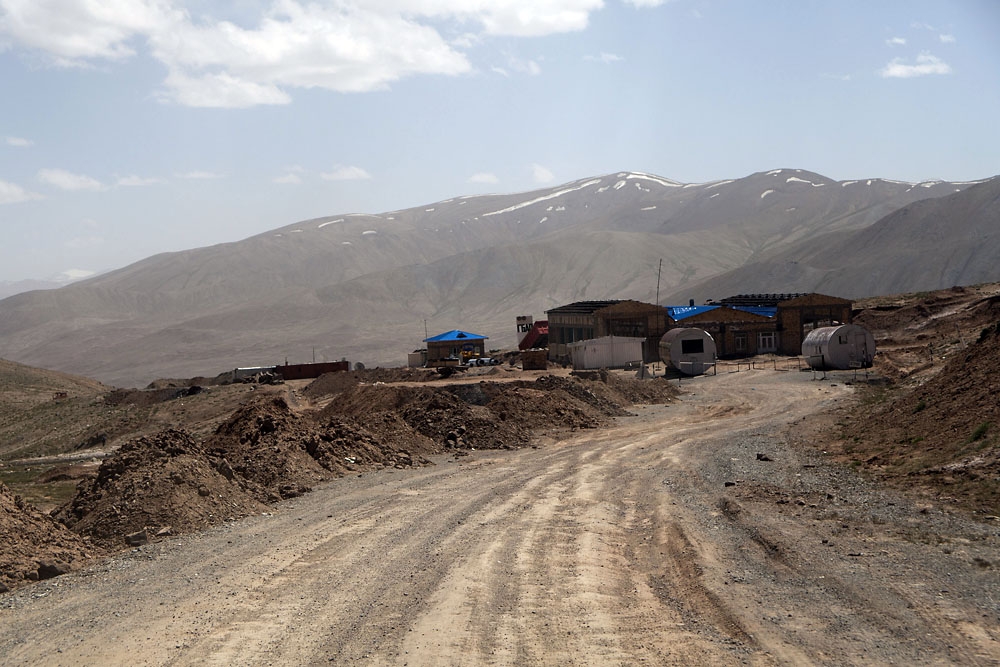 Down the other side of the pass leads to the Tajik customs and passport control checkpoint. 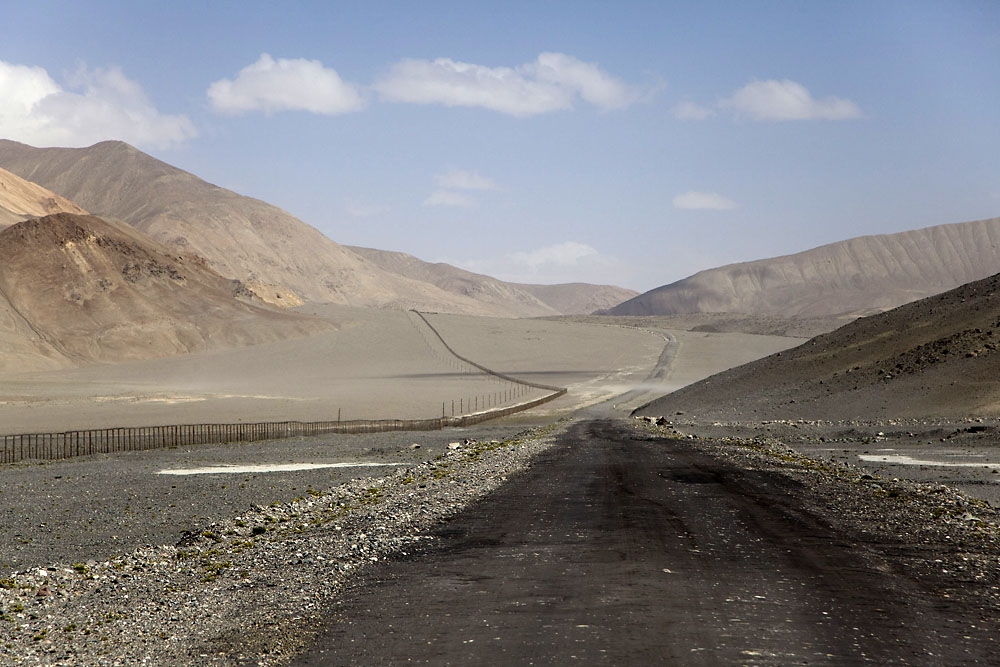 Once in Tajikistan the road runs along a fence showing the Chinese border. 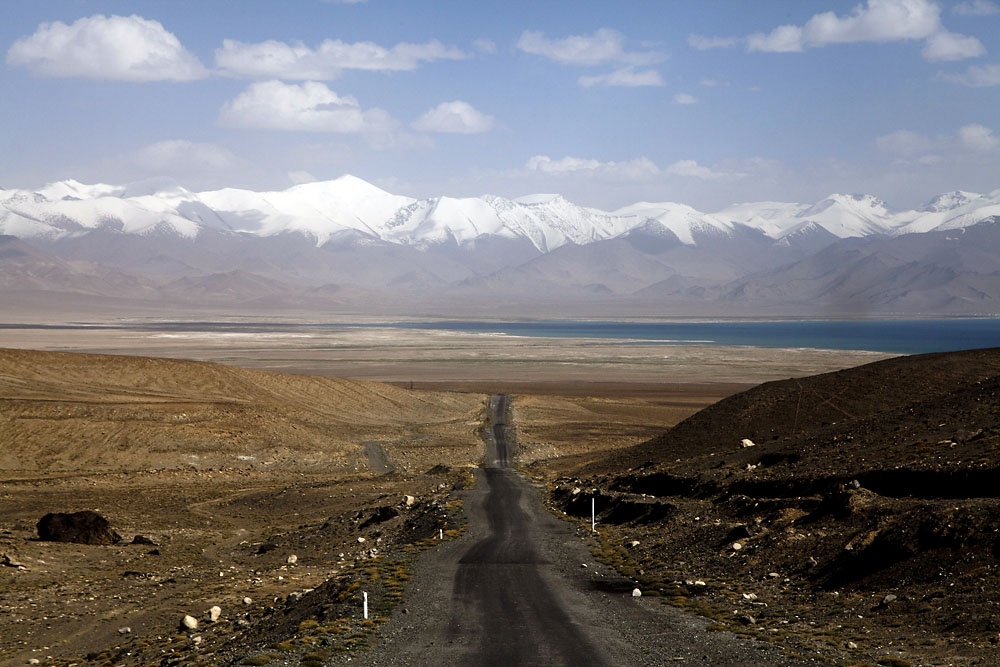 The highway leads south toward an alpine lake and snow-covered peaks into Karakol. 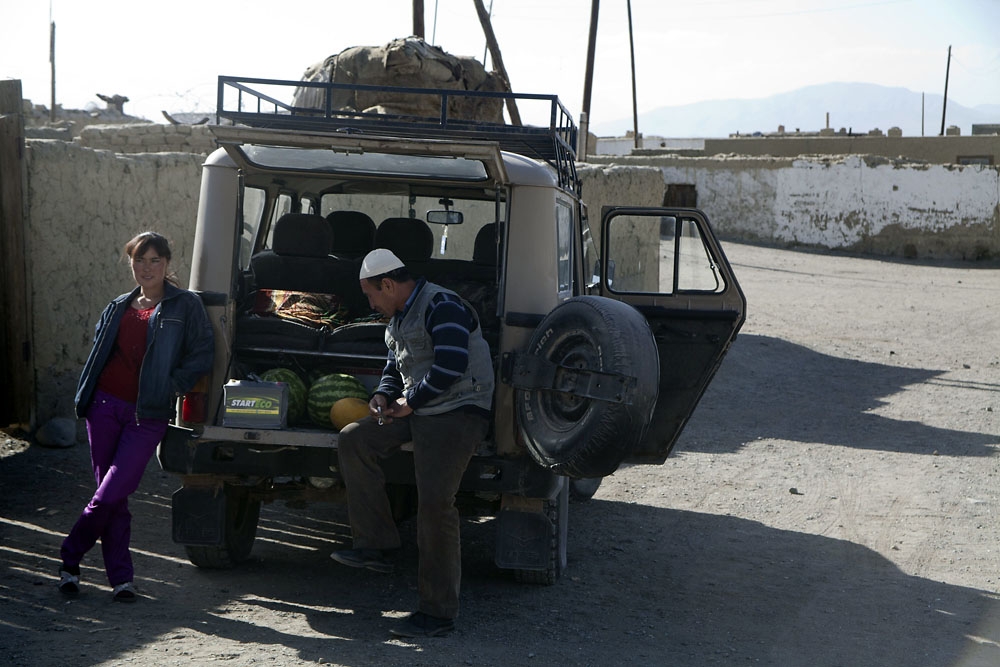 Along the way Khalli, an ethnic Kyrgyz driver, sells fruit and vegetables in Tajikistan that he bought in Osh. 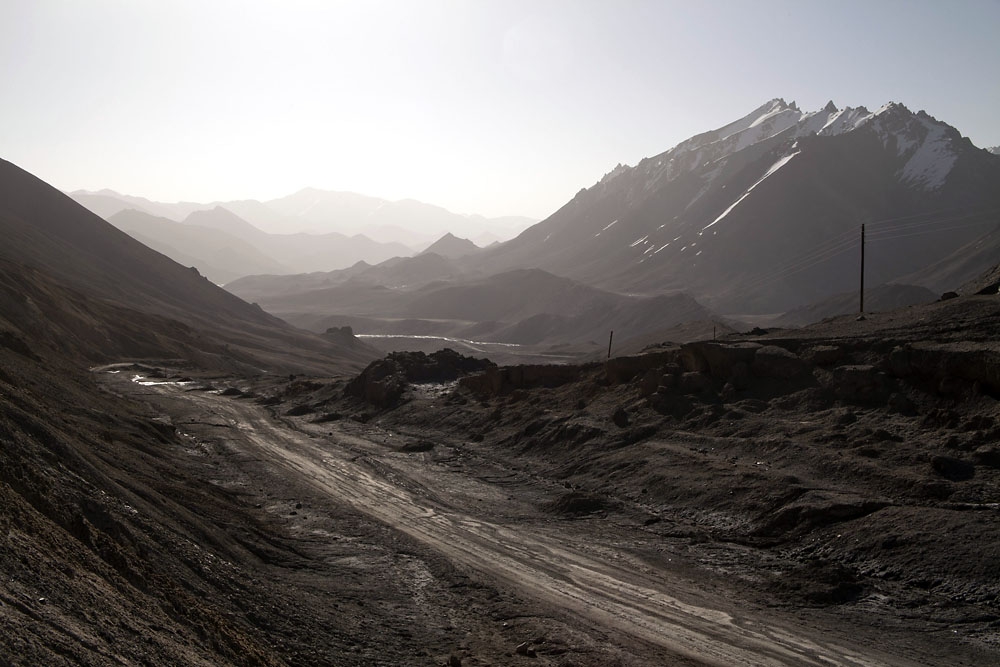 The Ak-Baital Pass between Karakol and Murgab rises 4,655 meters in Tajikistan. 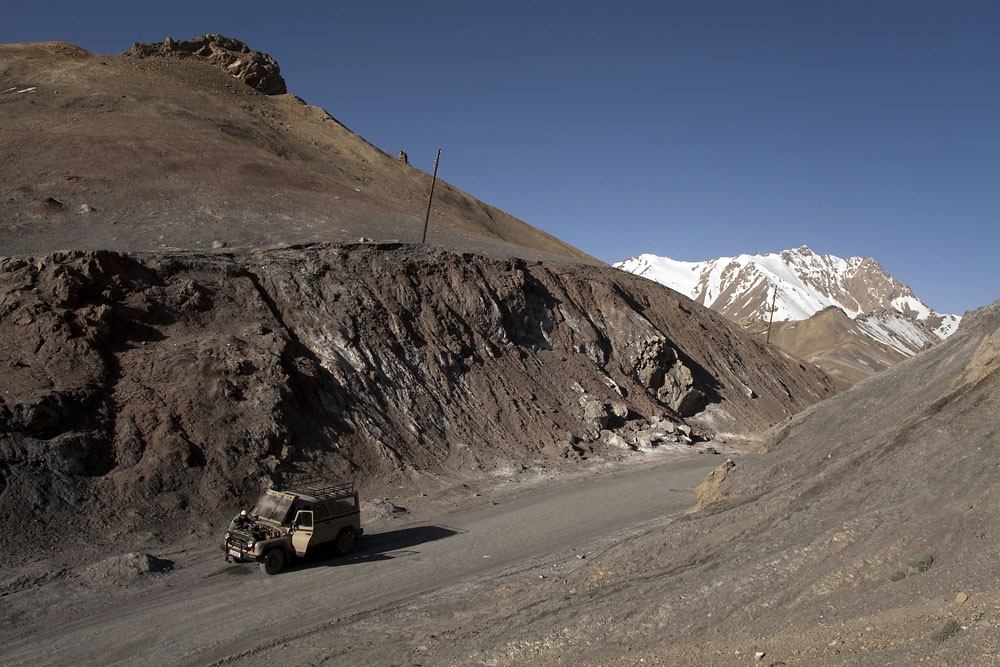 Khalli works on his Soviet UAZ after it overheats on the Ak-Baital Pass. 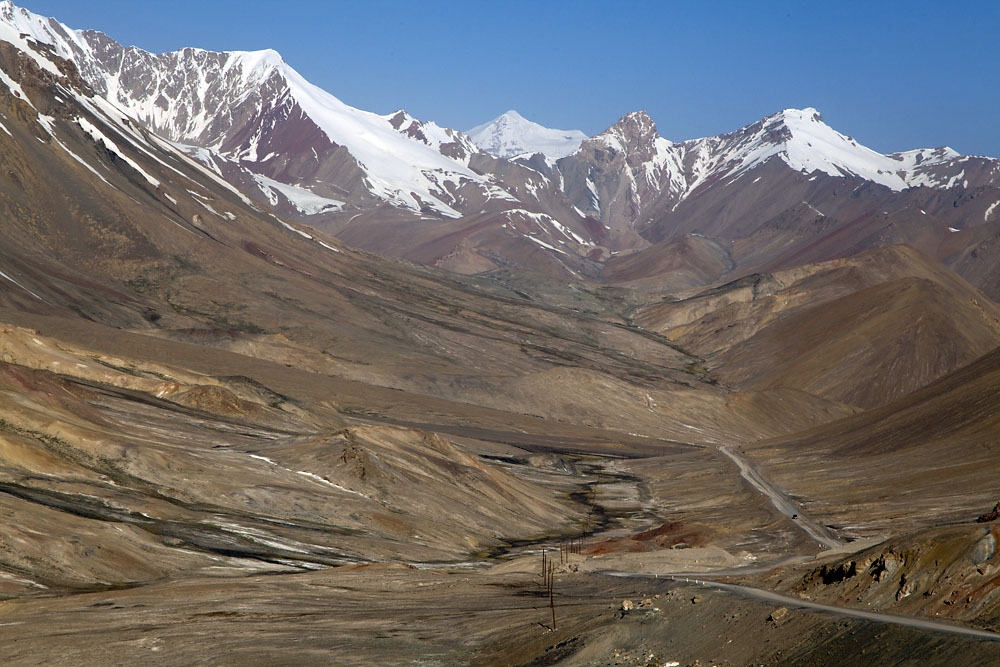 Officially the M41, the Pamir Highway runs 1,252 kilometers between Osh and Dushanbe. 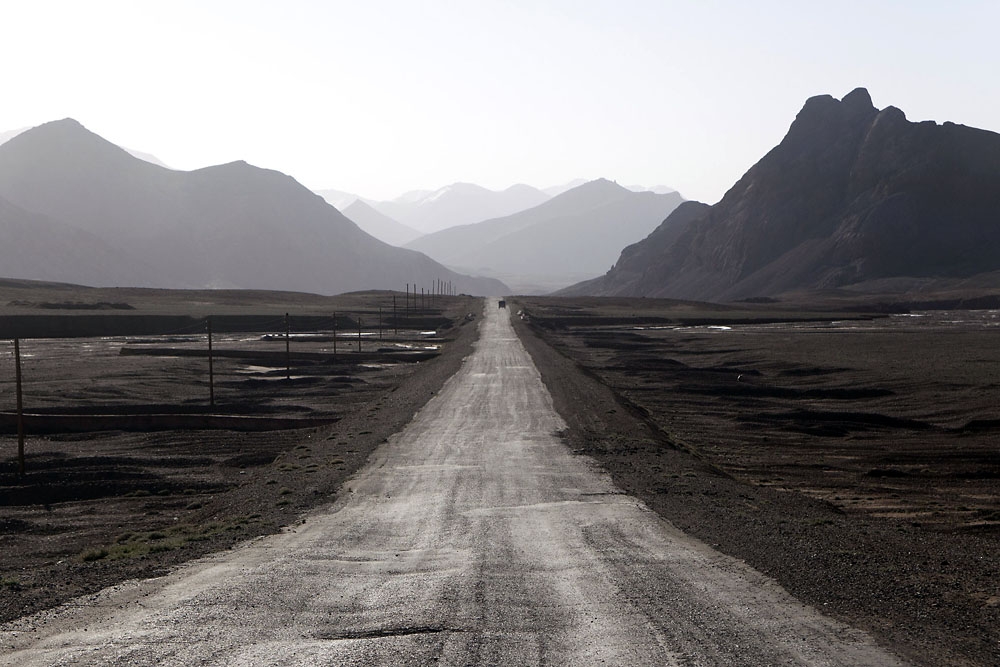 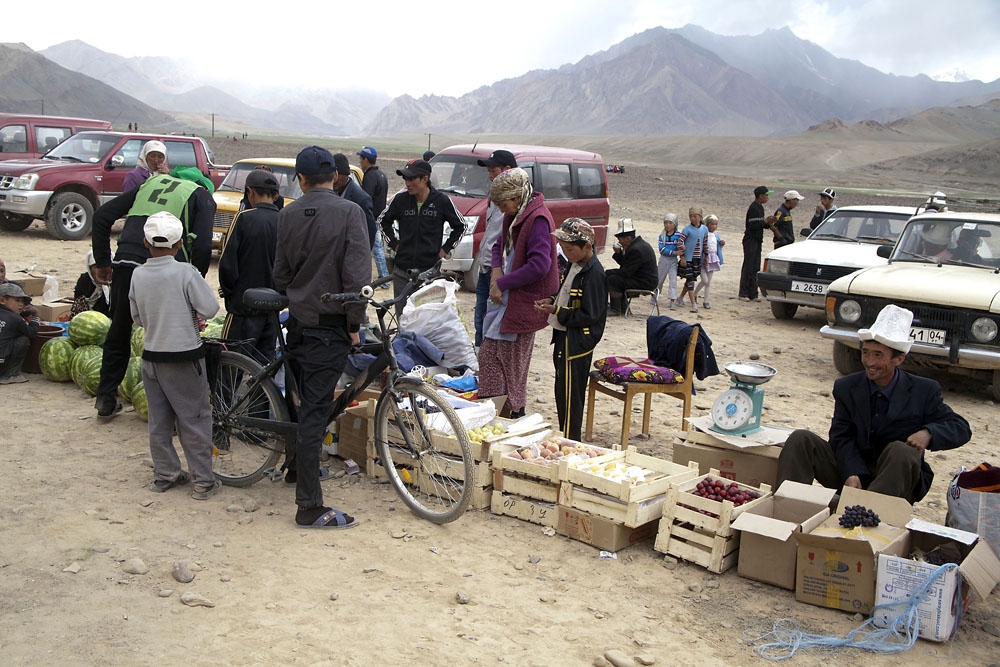 Along the highway Kyrgyz traders sell produce at a horse festival in Murgab, Tajikistan. 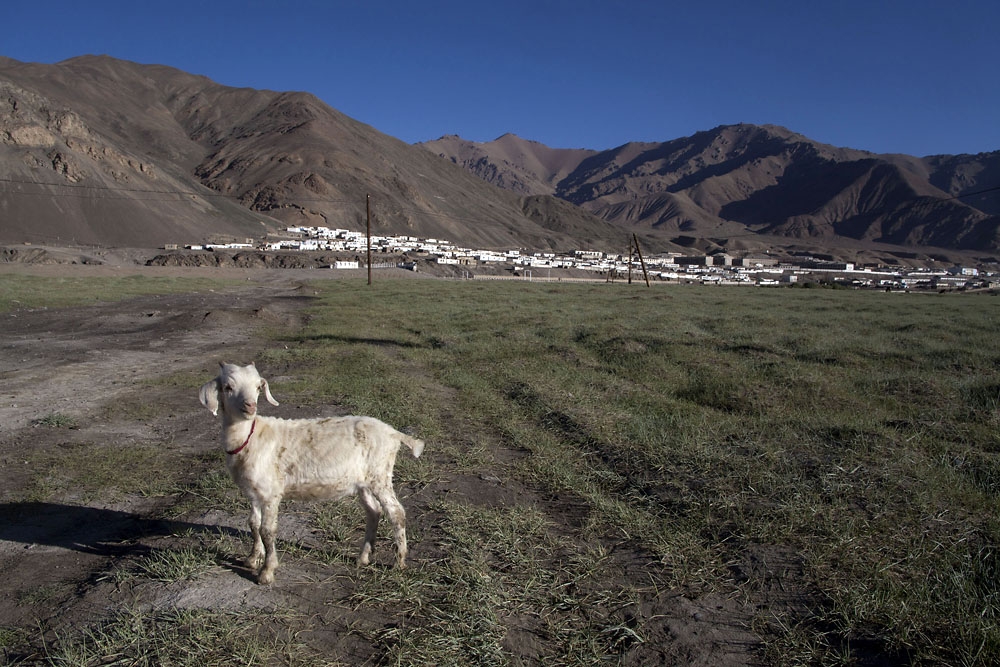 Almost all food is brought to Murgab - a town of approximately 5,000 ethnic Kyrgyz and Tajiks. 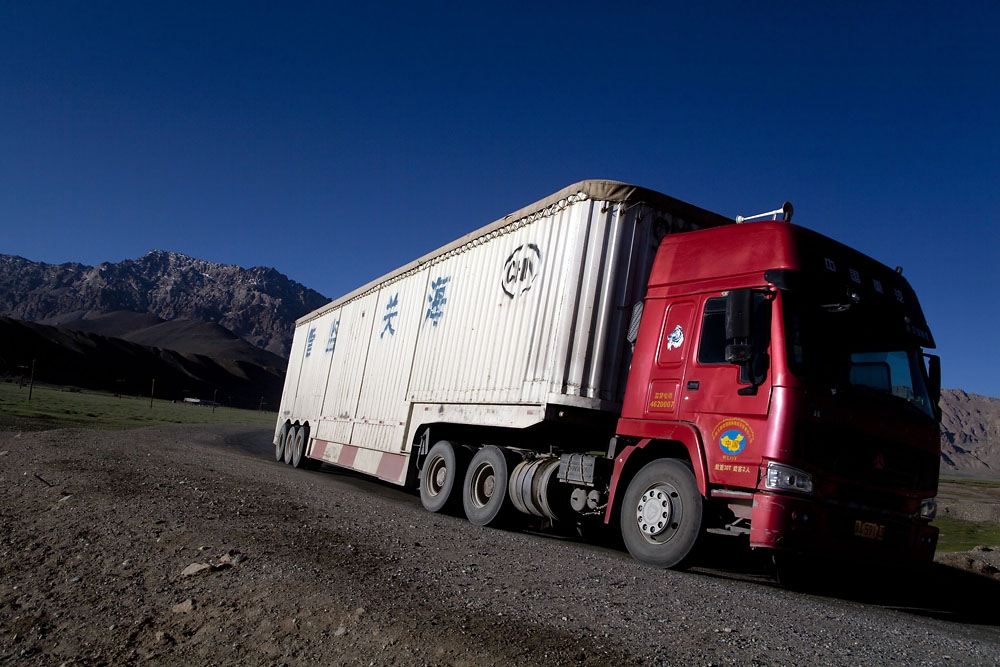 On a new asphalt road near Murgab a Chinese long-haul tractor trailer passes by in the early morning heading west.
prev
next

Ask anyone selling just about anything in Tajikistan’s lonely eastern outpost of Murgab where they got it, and odds are they’re going to give the same answer: Osh, Kyrgyzstan.

At over 3,600 meters above sea level, little grows in dusty Murgab. Food is imported. Locals burn short, dry shrubs and yak dung to keep warm and cook their food. Seven hundred years ago, Marco Polo described the region as “nothing but a desert without habitations or any green thing, so that travelers are obliged to carry with them whatever they have need of.” It seems an unlikely location for any kind of settlement.

The town of approximately 5,000 ethnic Kyrgyz and Tajiks was the site of Pamirskii Post, a Russian garrison established at the end of the 19th century.

Positioned less than 100 kilometers from both the Chinese and Afghan frontiers – and over 4,000 kilometers from Moscow – Murgab grew in the 1930s to supply and support the newly constructed Pamir Highway, which connected the Pamir Mountains with the rest of the Soviet Union. The Soviets hailed their road as an engineering and ideological triumph. The Bolshevik historian M.M. Slavinskii proclaimed, “instead of isolated districts there is now one connected and unified economic whole where there used to be inaccessible periphery.”

For another 60 years, the region depended heavily on Moscow for food and fuel. With the end of the Soviet Union, government subsidies for both the community and the road evaporated.

Despite its decay, the Pamir Highway – officially the M41, which runs 1,252 kilometers between Osh and Dushanbe – remains a lifeline in the desolate alpine plains of eastern Tajikistan. Murgab drivers make the 12-hour journey to buy foods from the lush valleys of Kyrgyzstan and sell them in Pamir towns.

“I can get some fruits and vegetables in Khorog” – capital of Gorno-Badakhshan province, at least six hours in the other direction – “but the quality, variety, and price are much better in Osh,” said a fruit seller in Murgab’s small bazaar.

Although Tajikistan opened its border to Chinese trucks in 2004, those vehicles bypass Murgab completely on their way to Dushanbe, stopping only to rest for the night on the edge of town.

Khalli, an ethnic Kyrgyz driver who regularly ferries tourists the 400 kilometers between Murgab and Osh in his Soviet-made UAZ jeep, has recently begun trying his hand in the market, scooping up watermelons, tomatoes, and grapes while in Osh. “I can buy a watermelon for about six somoni ($1.25) and sell it in Karakol for 15 or 20. In Murgab for 29! Maybe.”

Fruits and vegetables are regularly sold at four to five times their original cost, but it’s that “maybe” that makes all the difference. Drivers like Khalli don’t have much ready cash and their vehicles take a beating on the M41. As the second-highest paved roadway in the world, it’s ravaged each year by the spring thaw and destructive snowmelt. Entire sections have been washed away, requiring regular river crossings; boulders are strewn throughout the passes; and in many sections the crumbled pavement has been abandoned in favor of relatively smoother dirt sidetracks. Few repairs are ever made.

The journey crosses three major mountain passes and, after entering Tajikistan, seldom drops below 3,800 meters. The highest point, Ak-Baital Pass, culminates at 4,655 meters. The border itself is at 4,282 meters and is delineated merely with a sign declaring, “Tajikistan,” and a statue of an ibex. Customs posts stand guard more than 20 kilometers apart at lower – but still chilling – elevations, along unpaved stretches of dirt. A simple metal bar to halt vehicles, a few soldiers in heavy coats, and an ad hoc flagpole suffice to regulate traffic between the two countries.

Although Khalli has made this drive for years, on a recent trip he was unsure how customs agents on either side of the border would respond to his trunk full of goods. “I gave them each a watermelon and that seems to be okay this time,” he said with some relief. “They always want something.”

Turat, another ethnic Kyrgyz from Murgab, shrugs his shoulders about the road. “Nobody is going to fix it for us, but the plows clear the snow in winter and it’s open all year round, with a few exceptions. I can drive to a hospital in Osh; my daughter takes a minibus to Bishkek for university; I have regular business driving tourists between Osh, Murgab, Khorog, and Dushanbe. What do people expect? Tajikistan is a poor country.”

Although he often reminisces about how the Soviet Union supplied everything Tajikistan needed, Turat feels it’s time for the region to find its own opportunities. The road, in any condition, helps with that. “The Pamir Highway is beautiful, and it brings good business for people who know how to look for it,” he said. “Today we are seeing tourists instead of Soviet military vehicles coming over the road. This is a good thing.”