The small community has been thrust back into the news by the Taliban advance. But there are no easy answers to questions about their future. 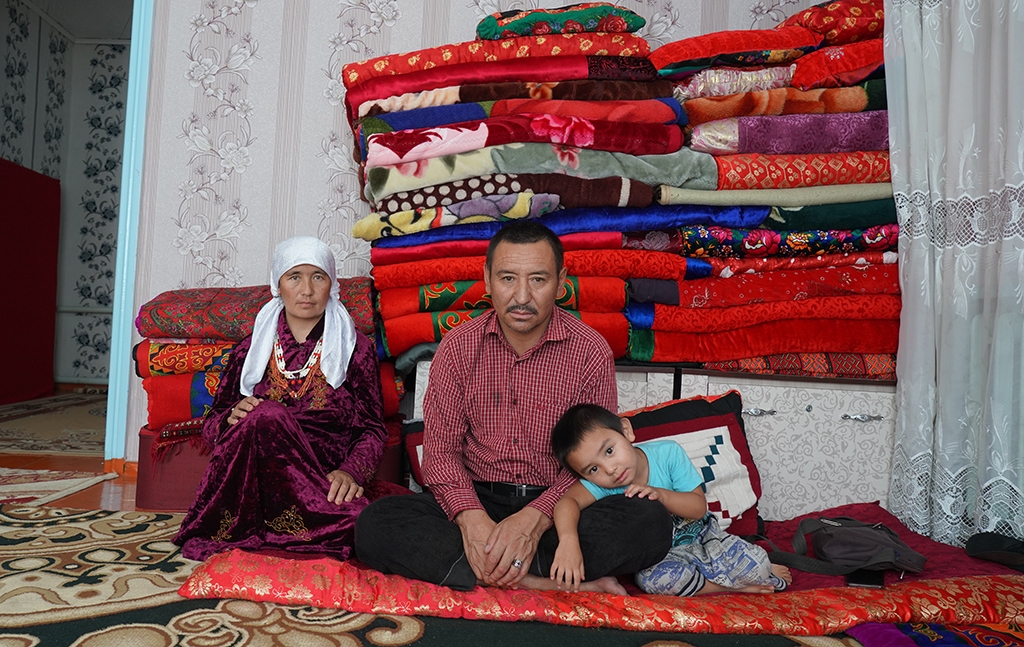 One day this April, when thick snow still covered the high-altitude Alai Valley, the small village of Taldy Suu saw a rare visit from a high-profile guest: President Sadyr Japarov.

“The hardships of the Pamir Kyrgyz have constantly disturbed my thoughts,” the president said during his April 4 visit. “I have wished to resettle them in their historic homeland for a long time, and now I mean to realize these intentions.”

The first group of Afghan Kyrgyz arrived in Kyrgyzstan in October 2017, after more than a decade of negotiations with Bishkek. Over the next few years, some returned to Afghanistan, citing a lack of work, land and permanent homes. Some then came back to Kyrgyzstan. Babies were born. Today, there are over 100 Afghan Kyrgyz living in the country.

Close family members were among the 347 Afghan Kyrgyz who crossed from Afghanistan into Tajikistan last month with their livestock. They were fleeing the Taliban, they told Tajik border guards. While such fears are understandable as chaos consumes Afghanistan, Eurasianet has learned that other factors may have driven the exodus.

During four decades of war, Afghanistan’s tiny Kyrgyz community – semi-nomadic Sunni Muslims living in the remote Wakhan Corridor – has been largely insulated. But the Taliban’s rapid advance following the withdrawal of U.S. troops this summer hit close to home: In July, the radical Islamist movement took control of much of northern Afghanistan, including the Wakhan, a finger of land sandwiched between Tajikistan, Pakistan, and China.

“We heard that American soldiers were in Afghanistan, but we never saw them,” said Abdulvakhid Jeenbek, 48, who has been living in Kyrgyzstan for nearly four years. “The Taliban didn’t come to our area either.” He only saw the militants when he ventured deeper into Afghanistan’s Badakhshan province, to Warduj, which has been contested for years.

Jeenbek’s relatives were among the refugees last month. While they faced no direct threat from the Taliban, they feared the militants could become a problem, they told him by phone.

When news broke that the refugees had crossed into Tajikistan, Kyrgyz officials said they were ready to resettle them and asked Tajikistan to let them pass. But Dushanbe sent the refugees back, saying the Afghan government had guaranteed their safety.

That appeared to many Kyrgyz like a calculated snub. Relations between Kyrgyzstan and Tajikistan hit an all-time low this year after violence on the border in April killed 55 and displaced thousands.

Jeenbek’s family does not trust guarantees from the Afghan government, which so clearly does not control the region. Now he worries they could be at risk of Taliban retribution.

“During the journey to Tajikistan they lost livestock, and two infants died. In the Pamirs, they lost belongings they had left behind. Moreover, they now look bad in the eyes of the Taliban for trying to flee.”

The Taliban have reportedly sent an envoy to the Afghan Kyrgyz, and the situation is said to be quiet in the Pamirs now. Eurasianet has tried to call the would-be refugees on their Tajik mobile numbers, without success; cell coverage is rare in the Wakhan.

But several sources believe the Afghan Kyrgyz who crossed into Tajikistan had reasons other than the Taliban to leave. Last winter was unusually harsh; many animals died. Other long-standing issues that drove migration in the past have not been resolved, including a lack of healthcare and education, high infant mortality, and a dearth of marriageable women.

Then there is Kyrgyzstan’s new president, who came to power in a street uprising last October. Shortly after his April visit, the resettled Afghan Kyrgyz finally received Kyrgyz passports. Japarov’s enthusiasm after years of tepid attitudes from Bishkek encouraged the Afghan Kyrgyz in the Pamirs.

“The refugees were hoping to be taken to Kyrgyzstan, and President Japarov’s words certainly influenced them,” said Abdulvakil Turdakun Uulu, 28, an Afghan Kyrgyz who lives in Bishkek. “They heard him saying that he would relocate them by winter. ‘He supports us,’ they thought.”

Tobias Marschall, an anthropologist who conducted his PhD research on Afghan Kyrgyz migration and spent 11 months in the Pamirs between 2015 and 2019, has found that not all Afghan Kyrgyz want to move permanently to the titular homeland.

“Some are not interested in settling in Kyrgyzstan conclusively and perceive migration differently to how the Kyrgyz government sees it – as one-way and definitive,” Marschall told Eurasianet.

Livestock is still valuable in the Pamirs. Despite the hardships, families can enjoy a certain autonomy thanks to their herds, he said. Some people would prefer to move back and forth between Kyrgyzstan and Afghanistan.

“Some told me, as long as there is livestock, the Pamirs will always have their nomads,” Marschall said.

For others, last winter seems to have changed their calculus.

Even colder than the Pamirs

On a Saturday afternoon in July, a group of Afghan Kyrgyz men in Taldy Suu were busy building a roof over a livestock shed. A month earlier, each family received 10 sheep, a cow, a calf, and a horse as a gift from the president. The government had moved them to Taldy Suu in October from Naryn province, where they had spent a few years living in the dormitory of a vocational school.

After a long winter in a new place, they were happy to resume herding.

The experiment in repatriation under the government’s kairylman (“returnee”) program has been difficult. Almost four years after the first group came to Kyrgyzstan, there is a sense of frustration bolstered by the realization that they have become a domestic political issue in a foreign land.

Kyrgyzstan’s government lacks the ability to care for most of its citizens even on a good day; its repatriation program has been fueled more by ethno-nationalist feelings than capacity. On top of that, local media exoticize the Afghan Kyrgyz and perpetuate stereotypes that they are backward relatives in need. The aid they receive can feed resentment; on social media, local Kyrgyz chide the settlers for complaining about their conditions when so many locals live without state support. Several Afghan Kyrgyz told Eurasianet they wished not to be quoted criticizing their accommodations but could not understand why they were put in such a cold and remote region.

The administrative center of Alai district, Gulcha village, is 130 kilometers from Taldy Suu across a mountain pass. None of the Afghan Kyrgyz own cars. Besides livestock breeding and some temporary work at a nearby coal mine, there are few job opportunities.

The government says it picked Taldy Suu because of the similar climate to the Pamir Mountains. But after spending time in Naryn province, another high-altitude area, the migrants were hoping to live somewhere warmer and with access to work.

“If they provided us with work, we would do our best to take care of ourselves,” said Nurlan Abubakir, 33. Back in Naryn, men could find work at construction sites or a cattle market. “For now, the government is taking care of us, but we want to mix with the people and make our own contribution [to society].”

Taldy Suu village head Turusbek Tayev said local authorities are in talks with trade schools in Osh for the young people: “If they get a profession, they can move to a city. There are barely any jobs in the village, even for the local Kyrgyz.”

“Our primary goal is to put them through school. Then they can be trained to become drivers, electricians and welders, and find jobs on their own,” Tayev added.

Sirajidin Abdulkhak, 23, just finished studying at a medrese, a religious school, in Jalal-Abad, a city to the north of Osh. He said he hoped to go back to the Pamirs to teach. Asked if he feared the Taliban, he said, “They are fighting with the Afghan forces and won’t touch ordinary people.”

Resettlement started promising for Jeenbek’s family in 2017, when they were gifted a house in the city of Naryn by then-President Almazbek Atambayev for having the first Afghan-Kyrgyz baby on Kyrgyz soil (whom they named Almazbek). Earlier this year, they sold the home and moved to Kara-Balta, a town 60 kilometers from the capital, Bishkek. He now regrets the decision: He can’t find a job and struggles to navigate the bureaucracy on his own. His family lives on the 4,800 soms ($57) of state benefits they receive per month for their six young children.

“We don’t regret coming to Kyrgyzstan for the future of our children,” he said. “No matter how much we struggle, we will stay here for them. I can’t take them back to the Pamirs.”

But sometimes he wonders: Is this what they came for?

On weekdays, he walks to various government offices trying to secure birth certificates for his children and to register the new house. “We don’t know the laws. We don’t understand the Russian language. But they tell me: ‘You’re a Kyrgyz citizen now, so you have to live like we do’.”

Amid this struggle to integrate, Jeenbek’s eldest son Turganbay, 20, stands out. Having read his first word in Cyrillic at age 16, he completed the nine-year school curriculum in three years and enrolled in a college in Bishkek to study pedagogy and journalism.

With over 52,000 subscribers on Instagram, he makes money on advertising and works as a presenter for a local Islamic television channel. Striking a patriotic chord with his story of coming to the ancestral homeland, Turganbay has become a Kyrgyz-language media darling.

He has no doubt his future is in Kyrgyzstan.

“I plan to go to the Pamirs to teach children there but I’m not talking about living there,” he told Eurasianet. “The [Kyrgyz] government should bring those [Afghan Kyrgyz] who want to come to our homeland. This is my wish. They can build a life here.”

It’s a message many Kyrgyz want to hear.