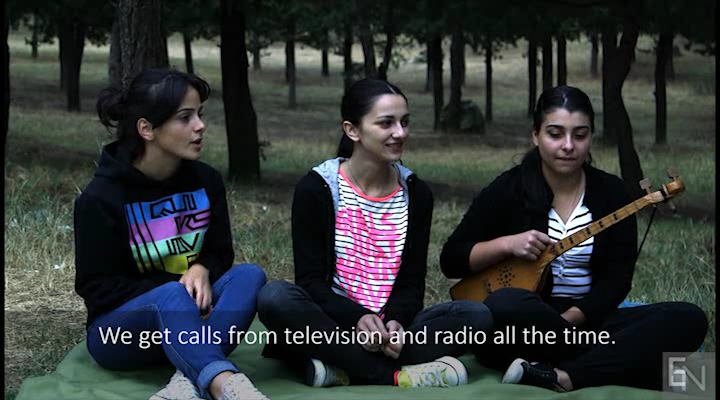 Three jovial Georgian teenagers had no idea they were about to become Internet sensations when they recorded a video-selfie earlier this month while walking on a country road. But later the same day, the three friends looked on in amazement as the song’s YouTube views spiked and shares went wild on Reddit and Facebook.

Calling themselves the Mandili (Veil) Trio, their story of instant stardom testifies to the power of the Internet, and how it can make the world a much smaller place.

Initial interest in the video seemed fueled in part by mystery: few viewers were able to discern the language they were signing in. "Does anyone know where they are from? Are they Serbian? I don't know the words, but it makes me cry," the online buzz went.

Only later did Georgian users arrive online with explanations about the song. It was a folk-style ballad, one typical of Georgia's highlands, specifically the northwestern Khevsureti region. It is the tale of a mystical encounter involving a young man called Apareka.

“Look up in the sky, Apareka, look how the moon rests on the Datvisjvari mountain pass,” the third singer, 19-year-old Tatuli Mgeladze belts out in a vigorous, low-pitch voice. “I will be your mate tonight, let’s talk through the night.”

Chincharauli and Tsiskarauli join in the chorus line as the song resounds in a three-part, dulcet harmony. In such harmonies, a mainstay of Georgian folk singing, the second voice carries the melody. The first voice follows in consonant thirds, while the bass mostly offers the root note of the chords. The tradition, richly embodied in the choral singing of the Georgian Orthodox Church, dates back to pagan times and is included in UNESCO’s list of Masterpieces of the Oral and Intangible Heritage of Humanity.

Some social media users from Georgia, where harmonic singing is almost daily fare, had a hard time understanding all the fuss about the Mandili Trio’s video. And despite foreigners’ demands for the lyrics, even Georgian viewers had trouble understanding all of the lyrics. The trio sing in a Khevsur dialect, and some words are not clear to ordinary native Georgian speakers.

Nevertheless, for the outside world, awash in headlines about the Islamic-State and war-rumblings between Ukraine and Russia, the song, as The Huffington Post wrote, seems to “transport you to another time.”

Humbled by the global attention, members of the trio, who have no performance experience or musical training, believe that the casual setting of the video and their unassuming manners were factors in helping the video go viral. As the number of YouTube views nears one million, it looks like that was sufficient, indeed.